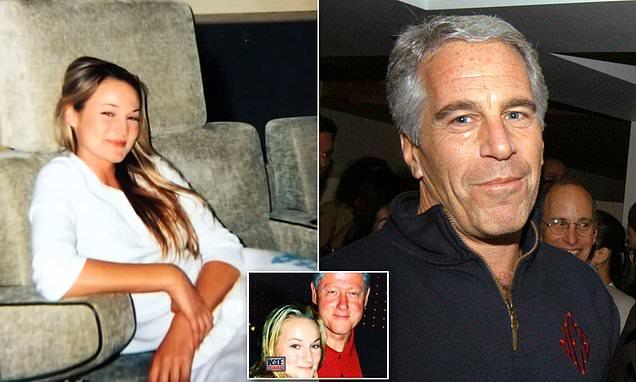 Well, for all those who have tried to cover up the relationship, the documented relationship, with convicted pedophile Jeffrey Epstein and Bill Clinton, now there are new pictures that have surfaced showing the former President and long-time philanderer Bill Clinton alongside Epstein, his mistress Ghislaine Maxwell and even Esptein’s young girl masseuse on Epstein’s private jet dubbed “The Lolita Express.”

It was the US Sun that exclusively obtained these photos.

Here’s Slick Willy alongside Maxwell at the door of the jet.

A little further shot on the 2002 trip to Africa.

In another image he has his arm round Epstein’s personal masseuse and sex slave Chauntae Davies - who had been ordered to wear a ‘pilot’ shirt to look professional.

Other never-seen-before images show Clinton traveling on the infamous Boeing 727 jet while playing cards and chomping on a cigar.

Now, for the first time, Chauntae Davies has revealed the extraordinary details of Clinton’s long distance flight to Africa with Maxwell and a number of other celebrities.

There is no suggestion Clinton, Spacey, 60, or Tucker, 48, did anything wrong during the tour, or knew of Maxwell’s alleged activities on Epstein’s behalf, or the abuse Chauntae suffered at his hands.

However, it will further raise concerns about how some of the world’s most famous and powerful people were drawn into Epstein’s circle at a time when he was committing horrific sex crimes.

Then here’s Clinton getting comfy with a stogie on the flight.

You’ll notice in each of these that Clinton is dressed differently indicating numerous flights.

For instance, here he is on a humanitarian trip to Africa and who knows who this is apparently singing to him.

At the time, Davies was 222 and claimed, “Clinton was a perfect gentleman on the flight” and denied any improper behavior.

In a previous statement issued by Clinton’s office, he stated that he was unaware of the crimes of Jeffrey Epstein:

“President Clinton knows nothing about the terrible crimes Jeffrey Epstein plead guilty to in Florida some years ago, or those with which he has previously been charged in New York.”

“In 2002 and 2003, President Clinton took a total of four trips on Jeffrey Epstein’s airplane: one to Europe, one to Asia, and two to Africa, which included stops in connection with the Clinton Foundation.”

“Staff, supporters of the Foundation, and his Secret Service detail traveled on every leg or every trip.”

Yeah, right.  And you never had sex with that woman, Ms. Lewinski too, right Mr. Clinton?

Spacey has obviously had his own issues with accusations of sexual assault.

And while no claims have been made against Chris Tucker, is there anyone who actually believes that these men knew nothing of underage girls on these flights?  Come on!

I’m not saying that Spacey and Tucker engaged in anything here, but pointing out that they were on the flight, but it’s clear that Bill Clinton and Jeffrey Epstein were a lot closer than he leads on.

In fact, Bill Clinton flew on Epstein’s private jet no less than 26 times!

I wonder when the Trump administration will eventually get around to stop policing the world and bring some justice to the Clintons, which he promised the American people before telling them how much of a debt of gratitude they owed to Hillary.

Loading...
"Not by might, nor by power, but by my spirit, saith the Lord of hosts." Zechariah 4:6
Read it..
BEFORE IT'S NEWS
SIGN UP FOR OUR NEWSLETTER
Today's Top Stories
I Will Jail Pelosi! President Trump Rains Insults on Nancy Pelosi & the Crowd Went Wild! - Great Video
Nancy Pelosi Was Red With Rage After Trump Got Game-Changing News! - Great Video
Virginia ‘Kill Zone’ trap ready for tomorrow Monday 1,20,2020
We Will Drive The Whole World Into So Much Chaos, They Will Beg Us For Relief, Enter The New World Order
X22Report We Have a Witness,Durham Following Strong Paper Trail, but the Best Is Yet to Come - Episode 2074b Q Anon
Insane Irony! Look Where They Put the Main Nazi Check Point in Virginia
Something Has Escaped Antarctica Secret Underground Base?
Points of Control: Sound, Frequency, & the Human Body
Lucifer Decoded - Revised Documentary Series- Mystery Babylon Exposed
Live at the Virginia Capitol Nazi Check Point
Loading...
Featured
National Emergency! US Citizens Targeted As Domestic Terrorists! - Must See Video
“Peaceful, Calm, and Friendly” Second Amendment Rally: Reality Versus Enemedia
Q Anon: The Virginia Script - NBC "Journalist" Caught Lying About 2A Rally In Virginia, Tried Smearing Attendees
Q News - Rude Awakening! Are We Seeing The Plan Come Together? - Great Video!
Trump Gives Michael Bloomberg One Hilarious Nickname
What Is This? There's 104 Missing Pages From Trump's Impeachment Reply!!
The Camp Northam Police State Trap
Live Streaming Richmond (1/20/2020 | 9am EST): "Sage Wanderer" (Friend of Illuminist Svali) — Info From Ground Zero
Complete Virginia Live Stream Coverage Here!
Robert David Steele: America the Beautiful - Strategic Plan, Amazon, China, One Belt One Road Cyber, Tencent, Web 3.0