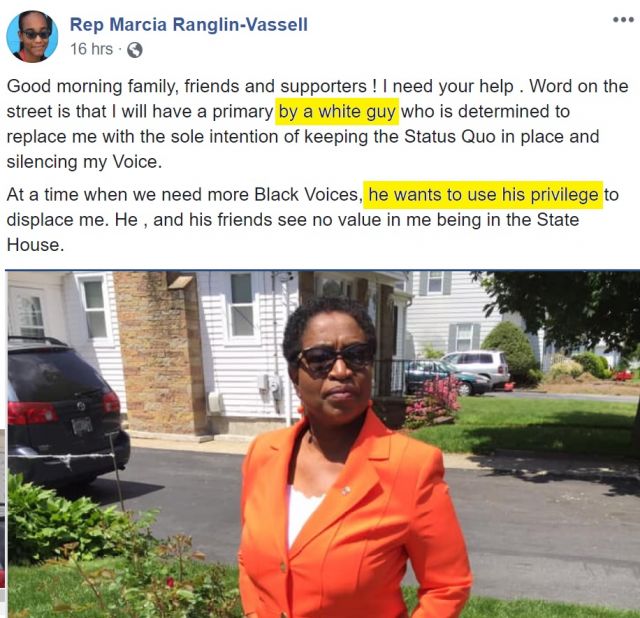 With the race wars brewing up all over the world, you would think a State Elected Official would do her best to try to promote unification, especially being a Representative of Rhode Island District 5 in Providence which is a very diverse area of Providence, RI being her constituents are of all race, color and creed.

She claims that her opponent Ronald Iacobbo (R)

“I will have a primary by a white guy who is determined to replace me with the sole intention of keeping the Status Quo in place and silencing my Voice.

At a time when we need more Black Voices, he wants to use his privilege to displace me. He , and his friends see no value in me being in the State House.”

At NO TIME did Mr. Iacobbo ever use any racial or sexiest statement against his opponent Incumbent Marcia Vassell.  I reached out to Mr. Iacobbo for comments, still awaiting a response.

This isn’t the first time Marcia Vassell has pulled out the race card. In the General Assembly last year in 2019 she went on a rant in the middle of session accusing someone in the General Assembly of using a racist statement calling her a “house slave” that was never stated or proven.
Racist comment stirs emotion for black Rhode Island lawmaker- AP News

It seems as if lately when Representative Vassell is challenged, she whips out the race card to try to use in her favor which is a VERY despicable act as a public servant and Representative of her Constituents. As a State Official, she should be leading by example and promote unity especially in these days of racial divide. She is NOT a representative of the black community, being that black folks I know are very respectful and show honor unlike this insanity.

I want to note, I personally am a Independent-Constitutionalist. I have worked countless campaigns since I was a child. I worked campaigns for Democrats, Republicans, Independents and Libertarians. I vote according to the person and who supports the Constitution for the United States of America the best Reason stating to show, I am not biased nor belong to any political party.

Representative Vassell claims, she Represents black women. Well what about the white, Hispanic, Latino, Asian women in her district? Also if she truly does represent black women. Where is she when black babies are being aborted daily, when women’s rights for self-defense are being trampled on by the majority of State Elected Officials constantly attempting push draconian gun control legislation and making it extremely hard for a “black women” or any women at that to obtain a concealed firearm permit, as Vassell constantly advocates and votes in favor or these Unconstitutional gun control laws.  Then has the nerve to use racist statements against her opponent Ronald Iacobbo.