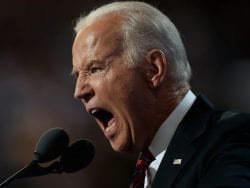 Why is Washington, D.C. completely locked down by National Guard patrols carrying loaded weapons on the eve of the Biden inauguration, while the Trump inauguration in 2017 was open to the public for all to see and to attend? On inauguration day in 2017 there were many protests permitted against Trump, and at least one of these protests turned violent with shop display windows broken and some properties burned by the leftist crowd that didn’t want Trump to become the president of the United States, but a anti-Trump atmosphere didn‘t prevent openness to American citizens.

The answer to the question as to why D.C. is locked down in 2021 is that Democrats believe in ruling with an iron fist, and this year they also want fear of the outgoing Trump administration and his voters to be expressly displayed for all to see, but Americans are not buying that line of crap about Donald Trump.

Democrats despise opinions that differ from their own and will not allow opposition to their Socialist rule ideology. They’ll always deny American citizens the right to express opposing opinions to their leftist rule, as we see happening in our nation’s capitol this week. So that’s why Trump’s inauguration was peacefully performed and Biden’s will look like a Nazi concentration camp.

Republicans, on the other hand, are peaceful and tolerant people dedicated to freedom of speech and assembly, and if that speech and those assemblies get out of control we expect the police to arrest the culprits and see that they are punished. But we believe our constitution protects protester’s speech without reservation.

Democrats refuse to build walls to keep illegal and possibly disease-carrying people out of our country, but walls made of barbed wire and concertina wire in a city locked down by armed guards are happily erected to keep American citizens from approaching our brave swamp-dwelling leaders as a new administration begins.

Of course, Democrats will say that the walls they build are protection from a riot similar to that of January 6, 2021, and that they have seen security reports on possible violence on inauguration day, even though an informed person like Gen. Jack Keane stated that he knows of no such official security report existing.

In 2020 Democrat politicians allowed and ordered riots from Seattle to Baltimore, all summer long, that burned and destroyed property and killed numerous people, and these Democrat leaders not only didn’t try to stop the rioting, they didn’t even admit that the rioting was happening for the entire summer. So where exactly was the concern for rioting, as happened at the Capitol building a couple of weeks ago, when their own ANTIFA and BLM thugs rioted without letup all summer?

Democrats refused to provide police protection to burning cities in the summer of 2020 as America burned, but now they are eager to get National Guard protection in the nation’s capitol, while they blame the skin colors of the “mostly white” National Guardsmen for causing the riots that have not even occurred yet. This alarm being set off by Democrats, of blaming white people for riots that have not happened yet, is kind of like blaming the Reichstag Fire in Berlin in the 1930s on Anti-German traitors. But in spite of the 2020-long chant of “Defund The Police” when the ANTIFA and BLM riots were occurring, the Democrat party now profess love for police and National Guardsmen as they assemble masses of soldiers and weapons in the capitol of the (formerly?) most free nation on earth. What in the hell is happening to this nation?

So why is the Democrat party vetting the Guardsmen who are defending D.C. from an imaginary enemy? What kinds of questions are the Guardsmen being asked? Could Democrats be selectively eliminating any Guardsmen who voted for Trump in the 2020 election? Could they be trying to assemble a pro-Democrat military and assure that Trump supporters are excluded from military service? Does this mean that Trump supporters are suspected of crimes against America? Will there be a round-up of Republican voters in the near future so these alleged subversives can be re-educated and made good (Democrat) citizens again?

In a city with streets lined with boarded up shop windows and restricted movement by barbed wire barricades and patrolling National Guardsmen, we will see Biden being sworn in with a crowd of observers about as small as the crowds he talked to from his basement during his campaigning last year.

One wonders what exactly is going on in our nation’s capitol.