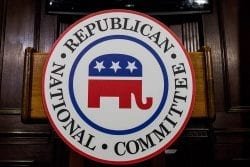 The explosive device at the RNC, which is being called a pipe bomb, was successfully destroyed by law enforcement, according to the New York Times, citing officials close to the matter. The package at the DNC has not yet been identified, the Times reported.

NYT: A pipe bomb was discovered at the RNC HQ in DC and detonated by the bomb squad https://t.co/MEfHNIefpn

Both party headquarters are located in Washington, D.C., near the U.S. Capitol, where thousands of President Donald Trump supporters have taken to the streets to protest the results of the 2020 election. Trump supporters clashed with law enforcement near barricades outside of the Capitol building and eventually forced their way in the Capitol, multiple videos showed.

At least one person, a woman who was not immediately identified, has been shot during the unrest, according to WUSA9. Photographs showed law enforcement officers with their guns drawn behind a barricaded door in the House Chamber.