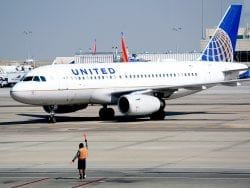 The CEO of United Airlines said companies should require employees to get vaccinated for COVID-19, according to a transcript of a Thursday town hall with company employees provided to The Daily Caller News Foundation.

The airline is considering a vaccine mandate for employees, but there are “logistical challenges that we need to work through” before that happens, a company spokesman told the DCNF.

“I think the right thing to do is for United Airlines, and for other companies, to require the vaccines and to make them mandatory,” United Airlines CEO Scott Kirby said in the town hall, according to the transcript.

Kirby said the company has to overcome “logistical challenges” for the endeavor, according to the transcript. The company also noted that Kirby disclosed the information to the company’s workers “in the interest of transparency.”

The CEO said he doesn’t think the company will be alone in mandating employee vaccinations.

“So, if others go along and are willing to start to mandate vaccines, you should probably expect United to be amongst the first wave of companies that do it,” Kirby said, according to the transcript.

United Airlines told employees in a note that they should receive the vaccine at their earliest convenience without waiting on the company’s guidance, according to CNBC. The note said United is working with government officials and healthcare providers so that vaccine distribution centers can be established in some of their largest areas.

Airline workers are deemed essential workers and have been part of the first groups to be eligible for vaccines, CNBC reported.

United Airlines had around 60,000 workers stationed in the U.S. at the end of 2020, The Hill reported. The company has sent approximately 17,000 recall notices so far in 2021 after the most recent coronavirus relief package provided more relief for airline companies.

The vaccine’s distribution has been both slow and tumultuous and the U.S. has been missing their goals, CNBC reported.

The Centers for Disease Control and Prevention (CDC) is now mandating everyone flying to the U.S. to test negative for the coronavirus, according to a Tuesday media statement.

CEO Of United Airlines Calls For Companies To Mandate COVID Vaccine is original content from Conservative Daily News – Where Americans go for news, current events and commentary they can trust – Conservative News Website for U.S. News, Political Cartoons and more.