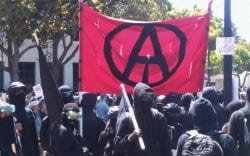 For a year, Democrats contently sat back and enjoyed the political scenery as ANTIFA and BLM rioted and burned their way across America. They hoped these terror groups and their violent acts were putting the Trump administration in a bad light and were helping Democrats win the 2020 election. There are now shocked to learn that the terror groups are not only continuing their violent ways, now that Donald Trump is out of the way, but are directing attacks on Democrat headquarters and expressing hatred for Biden as the new-and-continuing problem president.

So now Democrats are a little late thinking about joining forces in the war against domestic terror, and they have no idea of how to deal with the insane, murderous left. Of course, Democrats could surrender to the terrorists and seek an understanding with them that would allow the light-in-the-loafers Joey Biden to continue to put in place his racist plans for the future of America, but I think the terrorist groups want more control over national policy than just that, and apparently, they want nothing to do with the addled, squinting, Biden.

Given Biden’s executive orders granting “equity” to minorities and his attempts to make government “look like America” and to end America’s alleged “systemic racism”, how can Biden declare war against the BLM terrorists? This would undermine every statement he made in the 2020 presidential campaign and would alienate his base from his presidency.

Biden’s own staff and cabinet of carefully selected minority and radical-left individuals have looked approvingly at the BLM violence of last summer and generally approved of everything they did during that shameful, riotous summer. Nancy Pelosi said that “that’s what people do” and Kamala Harris said that the rioters were just letting off steam because they were angry. So there has been no push-back to this point against the 2020 violence and the many lives lost last summer, and the billions of dollars lost in property damage, but now the anger is directed at Democrats, and Joey, if he has even been told the rioting is happening, is in a tight spot if he intends to use force to stop this continuing nightmare of the left that is plaguing America.

Democrats Are Shocked That ANTIFA Is Now Attacking DNC Offices is original content from Conservative Daily News – Where Americans go for news, current events and commentary they can trust – Conservative News Website for U.S. News, Political Cartoons and more.