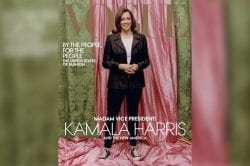 The VPOTUS-elect Kamala Harris is waging war with the first public battle of her tenure.  First up?  Vogue Magazine.

According to the New York Times, Harris’ team is at odds with the high-end fashion magazine’s editorial group over their decision to select a casual photo of Kamala for their next cover instead of a more formal photo that they feel casts her in a better, more professional light.

“February’s issue features Ms. Harris in a dark jacket by Donald Deal, skinny pants, Converse, and her trademark pearls. She stands against a leaf green backdrop bisected by a spill of pink curtain, colors meant to evoke her Howard University sorority, caught in what seems like mid-laugh, hands clasped together at her waist,” the New York Times reports.

She’s also wearing a pair of Converse sneakers and appears to be caught off guard in the photo.  Harris’s team has pointed to two photos they say undermine the authority of her new position and may actually expose Vogue’s internalized prejudices.

Social media critics, who slammed the photo, called it “disrespectful.”

“Though Gabriella Karefa-Johnson receives credit as the sittings editor, a.k.a. the fashion editor in charge, Ms. Harris chose and wore her own clothes. The selected photo is determinedly unfancy. Kind of messy. The lighting is unflattering. The effect is pretty un-Vogue. ‘Disrespectful’ was the word used most often on social media,” the NYT notes.

Investigative reporter Yashar Ali added that Harris’s team felt misled by the choice and that they believed a different photo, with Harris facing forward, dressed sharply in a Michael Kors powder-blue tailored suit was going to be the cover shot.

“Several news outlets, including the Associated Press and CNN, reported that Harris’s team felt ‘blindsided’ by Vogue’s selection and was unaware that the magazine switched out the cover photo from what the team originally agreed on,” left-leaning outlet Vox added. “Vogue’s intentions with its cover, as clarified in a public relations statement, were to highlight the vice president-elect’s ‘authentic, approachable nature.’”

After the push back, Vogue agreed to swap the photos but only for the magazine’s digital version.

3. To be clear, this Vogue cover of Vice President-elect Kamala Harris is real. It’s just that per a source familiar, this is not the cover that was mutually agreed upon. The agreed upon cover had VP-elect Harris in a powder blue suit.So folks feel blindsided this evening. pic.twitter.com/PRhTBpXzxm

The New York Times reports, though, that Vogue believes it was in the right to select the photo they wanted. “Vogue had not granted any kind of contractual cover approval rights to Ms. Harris,” they said. “That meant Ms. Harris’s team had not seen the final choice, which was left to Vogue, and had not known the magazine had decided to swap the photos.”

“For decades, the magazine has excluded and underpaid Black talent and published racially insensitive images and stories. This casual image of the woman who will be America’s first woman vice president seems to add to the narrative of Vogue’s lack of respect for women of color, even one who has risen higher in the American power structure than any other woman in US history,” Vox notes. “There was considerable labor and forethought put into crafting the vice president-elect’s cover shoot, but the final product — through Vogue’s traditional editorial process — appeared perfunctory.”

But it’s not Melania so it should be more than fine, right?

VP-Elect’s Team at War with Vogue Over ‘Disrespectful’ and ‘Racist’ Magazine Cover is original content from Conservative Daily News – Where Americans go for news, current events and commentary they can trust – Conservative News Website for U.S. News, Political Cartoons and more.