The corruption that has stemmed from the fascism in the united States is absolutely incredible, and the redistribution of wealth that was talked about in the Obama era has now moved into the housing industry.

EDITOR’S NOTE: Remember, the rulers have already told us we will own nothing and be happy.  They didn’t tell us that they will own everything and you’ll be charged to live and breathe their air. This is only one step toward that dystopian nightmare that we are already on the path to unless we wake up quickly. Masters own everything, slaves own nothing.

As the real estate market continues to break records, a cabal of institutional investors has been tossing gasoline on the fire – buying up properties hand-over-fist as middle-American renters watch their dreams of homeownership fade at the hands of pension funds and other financial behemoths.

“You now have permanent capital competing with a young couple trying to buy a house,” according to real estate consultant John Burns, whose firm estimates that in many of the country’s hottest markets, roughly one 20% of homes sold are bought by someone who never moves in.

“That’s going to make U.S. housing permanently more expensive,” said Burns, who thinks home prices will climb as much as 12% this year, on top of last year’s 11% rise. 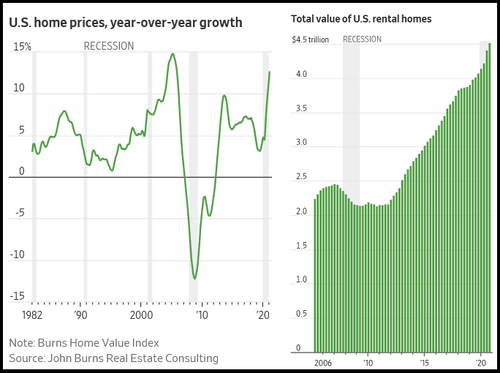 “Limited housing supply, low rates, a global reach for yield, and what we’re calling the institutionalization of real-estate investors has set the stage for another speculative investor-driven home price bubble,” his firm concluded – finding Houston to be a favorite location for investors, who have accounted for 24% of home purchases in the area.

The coronavirus pandemic sparked a race for home-office space and yards. Occupancy rates reached records and rents are rising with home prices. The ecosystem of companies that service, finance and mimic the mega landlords is booming.

Burns counted more than 200 companies and investment firms in the house hunt: computer-assisted flipper Opendoor Technologies Inc., money managers including J.P. Morgan Asset Management and BlackRock Inc., platforms such as Fundrise and Roofstock that buy and arrange for the management of rentals on behalf of individuals and builder LGI Homes Inc., which now reports wholesale home sales to bulk buyers in its quarterly results. –WSJ

In one example, a bidding war broke out over a D.R. Horton complex in Conroe, Texas – after the homebuilder put the entire subdivision up for sale. After a “Who’s Who of investors and rental-home firms flocked to the December sale,” the winning bid of $32 million came from an online property-investment company, Fundraise LLC, which manages over $1 billion for around 150,000 individuals, according to the Wall Street Journal.

D.R. Horton ended up booking roughly twice what it typically makes selling houses to middle-class homebuyers according to the report. 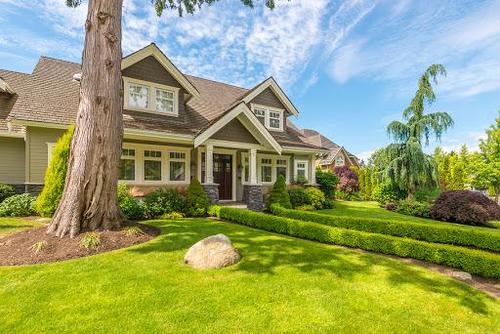 “We certainly wouldn’t expect every single-family community we sell to sell at a 50% gross margin,” said CEO Bill Wheat at a recent investor conference.

What does this mean for the average American family? We’ll let Twitter analyst @APhilosophae take it from here in this ominous, yet soberingly accurate thread:

Blackrock is buying every single family house they can find, paying 20-50% above asking price and outbidding normal home buyers. Why are corporations, pension funds and property investment groups buying…https://t.co/uTagTOQQgI

entire neighborhoods out from under the middle class? Lets take a look. Homes are popping up on MLS and going under contract within a few hours. Blackrock, among others, are buying up thousands of new homes and entire neighborhoods. https://t.co/mBDLgtoyEc

So who is Blackrock? Only the worlds largest asset manager and the leading proponent of The Great Reset. Theyre looking to redistribute -Get this- $120Trillion dollars. The entire wealth of the worlds middle class and poor combined several times over.https://t.co/emTx0osJuz

As an example, a 124 new home neighborhood was bought in its entirety in Texas. Average Americans were outbid to a tune of $32million. Homes sold at an avg if 20% above listing. Now the entire neighborhood is made up of SFR’s. What are SFR’s??https://t.co/luVQEXUeKy

Single Family Rentals. Now, your potential lower to middle class home owner is positioned to be a permanent renter. This matters because for the lower and middle class owning a home is the most major part of any financial success, and future upward mobility.

This is wealth redistribution, and it ain’t rich people’s wealth that’s getting redistributed. It’s normal American middle class, salt of the earth wealth heading into the hands of the worlds most powerful entities and individuals. The traditional financial vehicle gone forever.

Single Family Rentals. Now, your potential lower to middle class home owner is positioned to be a permanent renter. This matters because for the lower and middle class owning a home is the most major part of any financial success, and future upward mobility.

This is wealth redistribution, and it ain’t rich people’s wealth that’s getting redistributed. It’s normal American middle class, salt of the earth wealth heading into the hands of the worlds most powerful entities and individuals. The traditional financial vehicle gone forever.

Home equity is the main financial element that middle class families use to build wealth, and black rock, a federal reserve funded financial institution is buying up all the houses to make sure that young families can’t build wealth.

Let that sink in for a minute. Got it? They’re using your tax dollars to fuck over the lower and middle class, and its permanent. Not 1 Pres. administration of bullshit. This is a fundamental reorganization of society.

So where does this position the average American in 30 years when its a given that every new neighborhood is to be bought up whole so they can be utilized as SFR’s? It positions them as peasants. Being poor can be temporary condition bettered by upward mobility.

In the US and other nations home ownership is often the 1st and most vital step. This can provide for generational wealth and success. But as permanent, guaranteed renters youre pissing away a lifetime of equity and the chance for mobility. You just become a peasant.

The Great Reset is real. It is happening. This will be the greatest transfer of wealth, and greatest consolidation of power in the history of mankind. If they get away with it revolution will be the only cure. It will be awful. Wake up. Get active. Stop this now!!

This is warfare. Make no doubt about it. Lloyds bank in London is doing it, as is every great financial institute across the world. This must be stopped. Its a greater threat than the slow creep of Communism, BLM or anything else you can think of COMBINED. It is a death stroke.

Black Rock, Vanguard, and State Street control 20 trillion dollars worth of assets. Blackrock alone has a 10 billion a year surplus. That means with 5-20% down they can get mortgages on 130-170k homes every year. Or they can outright buy 30k homes per year. Just Blackrock.

Now imagine every major institute doing this, because they are. It can be such a fast sweeping action that 30yrs may be overshooting it. They may accomplish feudalism in 15 years.

Click on any of the above tweets to continue reading.

Remember, The World Economic Forum has warned us of their intentions: You will have nothing and be happy.

I say, we take it back to them and start unleashing a slew of justice on their criminal heads.