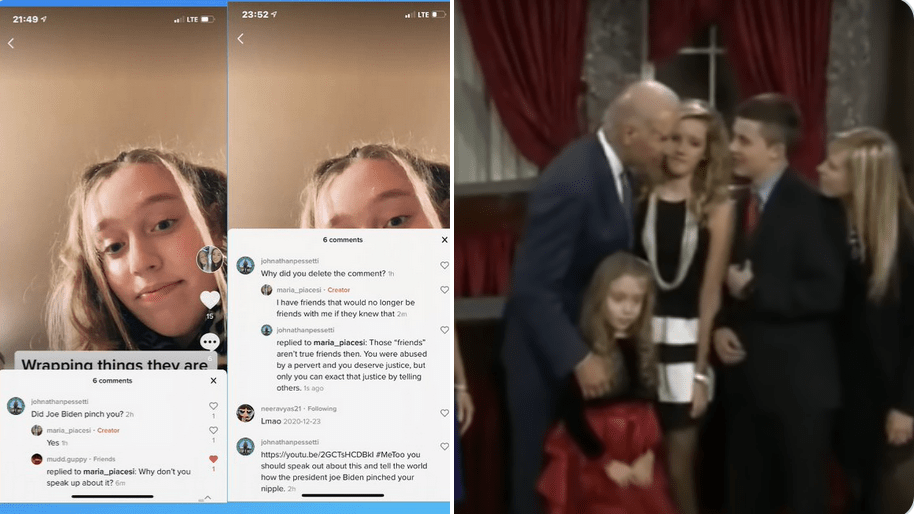 Why does America tolerate its tyrants and criminals in various offices both in the federal government and in the states? Largely it’s because she has forgotten that the God who founded us is a God of justice, and the other part is that many don’t know either the Bible nor our founding documents and therefore don’t seem capable of bringing the justice upon their corrupt representatives that is warranted. Joe Biden is one that should pay for his crimes and below is video evidence of one of them.

In 2015, Biden was caught on film groping the niece of Senator Steve Daines during his swearing-in ceremony.

Biden ran his hands down her body and pinched her nipple.

Yet, Democrats will never call him out for inappropriately touching children or women.

They’ll continue to turn a blind eye like the hypocrites they are.

Here’s the disturbing footage that was caught on C-SPAN:

The girl’s name is Maria Piacesi and she was 8 years old then.

However, Maria has finally spoken out and she confirmed what we all witnessed on film.

That Creepy Joe indeed groped her.

Jonathan Pasetti recently had a conversation with Maria on Tik Tok, where she admitted Biden pinched her.

Here are screenshots of the conversation:

Six years later, Maria Piacesi is finally speaking out. Citizen journalist Jonathan Pasetti recently shared screenshots of a conversation he had with Maria Piacesi on social media app Tik Tok where she admits that President Joe Biden pinched her nipple. The teenager has since deleted her comments however the screenshots still exist.

Pinching a young child in their breast area is considered molestation. Joe Biden is a molester.

Pasetti later followed up with the young girl after she deleted the comment, asking “Why did you delete the comment?”

“I have friends that would no longer be friends with me if they knew that,” she replied.

“Those “friends” aren’t true friends then. You were abused by a pervert and you deserve justice, but only you can exact that justice by telling others,” Pasetti replied.

The journalist also shared a screenshot of his direct messages with the teenager after she reached out to him.

“I would do something about it tbh if I thought it would help but I honestly just think at this point it would just make people angry and I have already had people calling me out saying I’m lying this is bs even tho it’s not but I just don’t think it would help with anything right now,” Maria Piacesi said.

Maria Piacesi, niece of Republican senator Steve Daines, revealed that US president Joe Biden pinched her nipple during a Swearing-In Ceremony in 2015. She’s scared of speaking out, her friends don’t believe her even though it was caught on video.

Joe Biden, 78, has — again — been accused of inappropriately touching a woman, but in this case there might actually be video evidence that the sitting president sexual assaulted a minor during his tenure as Vice President in 2015.

In a shocking TikTok video a 14-year-old Maria Piacesi, niece of the Montana senator Steve Daines, claims that Joe Biden pinched her nipple when she was only 8-years-old during a Ceremonial Swearing-In session. The ordeal was caught on camera but the mainstream media has largely discounted the theories that Biden sexually assaulted the underage girl as a ‘right-wing conspiracy theory’.

Maria Piacesi is the only child of Rob and Christie Piacesi. She describes herself as “very social” and has a very upbeat demeanor.

“I play the flute and piano and always like to keep busy one way or another. I am also very adventurous when it comes to activities,” Piacesi stated in her profile.

“Did Joe Biden pinch you?” A user by the name of Jonathan Pasetti asked, to which Piacesi responded, “Yes.” However, soon after, she deleted her comment.

“Why did you delete the comment?” Pasetti asked. “I have friends that would no longer be friends with me if they knew that,” Maria Piacesi replied.

Mr Pasetti then added: “Those ‘friends’ are not true friends then. You were abused by a pervert and deserve justice, but only you can exact that justice by telling others.”

Maria Piacesi then sent the user a direct message via the TikTok app and said that she’s wanted to speak out about her assault but that she fears that she won’t be believed and will be seen as an outcast.

“I would do something about it — to be honest — if I thought it would help, but it would only make more people angry and I’ve already had people calling me out saying I’m lying and this is BS [bullsh*t], even though it is not. I just don’t think it would help with anything right now,” Maria Piacesi said.

Mr Pasetti reassured the scared 14-year-old, “I understand your apprehension. The first thing, though, is not letting him get away with it because then he can do it to others. I just want you to know that there are millions of people who are on your side and they believe you. There is video evidence of what happened and I believe you. We all believe you.”

“Creepy” Joe Biden Gets Called Out At Gym Rally: “You Touch Kids On Video”

Joe and Hunter and the rest of the Biden and Obama crime families need to be arrested, tried and then have swift justice brought upon them in the public square.