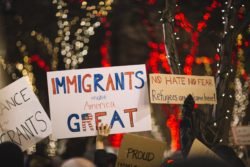 “Multiculturalism” refers to the progressive teaching that every culture is equally valid, and that cultural norms different from our own should be immune from criticism. In other words, if another person’s culture is cool with female genital mutilation and throwing gay men from rooftops—accepted practices in some Muslim countries—who are we to say those things are wrong? Multicultural ideology demands that America open its arms to immigrants and refugees from all cultures, even ones that condone things such as mutilating the genitals of young girls and throwing gay men to their death.

In June 2004, a conference was held in the nation’s capital about the mortal danger multiculturalism and unchecked immigration pose to America. One of the speakers was Victor Davis Hanson, a conservative Republican whose best-selling book, “Mexifornia,” chronicles how multiculturalism and massive immigration have virtually destroyed his home state of California. A few months after the conference, former Colorado governor Dick Lamm, a liberal Democrat, delivered a stunning address that described how multiculturalism and massive immigration will, if not reversed, lead to the destruction of America as we know it. As published on the website of conservative journalist Michelle Malkin, below are highlights of Gov. Lamm’s 8-point plan to destroy America.

I have a plan to destroy America

I have a secret plan to destroy America. If you believe, as many do, that America is too smug, too white bread, too self-satisfied, too rich, then let’s destroy America. It is not that hard to do. History shows that nations are more fragile than their citizens think. No nation in history has survived the ravages of time. Arnold Toynbee observed that all great civilizations rise and they fall, and that “an autopsy of history would show that all great nations commit suicide.” Here is my plan to destroy America.

1. We must first make America a bilingual-bicultural country. History shows, in my opinion, that no nation can survive the tension, conflict, and antagonism of two competing languages and cultures. It is a blessing for an individual to be bilingual; it is a curse for a society to be bilingual. One scholar, Seymour Martin Lipset, put it this way: “The histories of bilingual and bicultural societies that do not assimilate are histories of turmoil, tension, and tragedy.”

2. I would then invent “multiculturalism” and encourage immigrants to maintain their own culture. I would make it an article of belief that all cultures are equal: that there are no cultural differences that are important. I would declare it an article of faith that the black and Hispanic dropout rate is only due to prejudice and discrimination by the majority. Every other explanation would be out-of-bounds.

3. We can make the United States a “Hispanic Quebec” without much effort. The key is to celebrate diversity rather than unity. I would encourage all immigrants to keep their own language and culture. I would replace the melting pot metaphor with a salad bowl metaphor. It is important to ensure that we have various cultural sub-groups reinforcing their differences, rather than Americans emphasizing their similarities.

4.  Having done all this, I would make our fastest-growing demographic group the least educated. I would add a second underclass, unassimilated, undereducated and antagonistic to our population. I would have this second underclass have a 50 percent dropout rate from school.

5. I would then get the big foundations and big business to give these efforts lots of money. I would invest in ethnic identity, and I would establish the cult of victimology. I would get all minorities to think their lack of success was the fault of the majority. I would start a grievance industry blaming all minority failure on the majority population.

6. I would establish dual citizenship and promote divided loyalties. I would celebrate diversity. “Diversity” is a wonderfully seductive word. It stresses differences rather than commonalities. Diverse people worldwide are mostly engaged in hating each other–that is, when they are not killing each other. A “diverse,” peaceful or stable society is against most historical precedent. People undervalue the unity it takes to keep a nation together, and we can take advantage of this myopia.

7. Then I would place all these subjects off-limits–make it taboo to talk about them. I would find a word similar to “heretic” in the 16th century that stopped discussion and paralyzed thinking. Words like “racist”, “xenophobe” halt argument and conversation. I would have the large foundations fund the doctrine of “victimology.” Then, I would make it impossible to enforce our immigration laws. I would develop a mantra –“because immigration has been good for America, it must always be good.” I would make every individual immigrant sympatric and ignore the cumulative impact.

8. Lastly, I would censor Victor Davis Hanson’s book “Mexifornia.” This book is dangerous; it exposes my plan to destroy America. So please, please–if you feel that America deserves to be destroyed—please, please–-don’t buy this book! This guy is on to my plan.

When Gov. Lamm finished his speech, the conference room was silent, as everyone in the overflow audience realized that what they’d just heard was being methodically carried out by the post-1960s Democratic Party in its ongoing attempt to “fundamentally transform the United States of America” through multiculturalism and massive immigration.

An immigration video worth watching and sharing

Unless significantly reduced, present immigration levels, legal and illegal, will destroy America as we know it. Prepared by the Center for Immigration Studies, the video presentation below shows the ruinous impact massive immigration is having on the country your children and grandchildren will live in. How you vote matters.

Photo by Nitish Meena on Unsplash

How Democrats Are Using Multiculturalism And Immigration To Destroy America is posted on Conservative Daily News – Where Americans go for news, current events and commentary they can trust – Conservative News Website for U.S. News, Political Cartoons and more.

Loading...
"Not by might, nor by power, but by my spirit, saith the Lord of hosts." Zechariah 4:6
BEFORE IT'S NEWS ON TELEGRAM
GET THE TELEGRAM APP - https://telegram.org/ JOIN OUR CHANNEL - https://t.me/BeforeitsNews
Read it..
BEFORE IT'S NEWS
SIGN UP FOR OUR NEWSLETTER
Today's Top Stories
Situation Update: The Truth Is Not For Everyone! Nuremberg 2.0 Begins! SCOTUS Election Fraud! Fake Alien Invasion MSM All Lies! - We The People News
Absolute Proof President Trump is Directly Responsible for Launching the Global Pandemic and mRNA Vax Operation. 12 Top Failures of DJT to Protect We The People. Sorry, The Truth Hurts Me to the Extreme as Well
New ShariRaye: Big Thanksgiving Turkey Intel! Mike Lindell Supreme Court - Biden Vax Mandate Halted!
X22Report - The Key & Stone Is How We Take Back The Country! Strategic Military Planning! - Must Video
Simon Parkes: Huge Intel Drop On The Right Side with Doug Billings (Video)
We Must Be Cautious About How Who We Trust! - On The Fringe Must Video
Situation Update: Trump: I Concede Nothing! Military Is The Only Way! Biden Destroying America! Lindell's SCOTUS Case Traction! - We The People News
DEAD DOCTORS DON’T LIE: A Shocking Number Of Physicians Who Strongly Advocated For COVID Vaccine Are Now Dropping Dead From ‘Adverse Reactions’
Greg Hunter & Mark Taylor: Political & Spiritual Treason Surrounds Trump! - Must Video
The Watchman: A Preview of What is Coming!
Loading...
Featured
Horrible News! Police Are Warning That They Can't Help You Anymore! Time To Get Ready For The Worst! - Full Spectrum Survival
Situation Update, Nov 24, 2021 - Flash Mob Looters Terrorize America As Lawlessness & Violence Explodes! - Mike Adams Must Video
After Another Soccer Player Collapses on the Field, Former Pro and Sky News Sports Announcer Calls for Investigation
David Nino Rodriguez: Here Come The Camps! Paying Attention Yet? - Must Video
Meanwhile The Laptop From Hell Keeps Giving! - Truth & Art TV
X22Report: The Central Banks Are Panicking! They Finally Said The Quiet Part Out Loud! - Must Video
A Judge Stands up to a Hospital: “Step Aside” and Give a Dying Man Ivermectin
Juan O' Savin and Spaceshot76 Share New Updates and Intel (Must See Video)
Felony Crimes End Pharma Immunity: US Criminal Conspiracy Strikes Root of Covid Nightmare
8 Times Democrats Tried To Cancel This Thanksgiving… Wait Until You See How!
Loading...
Top Global
The Irony: Euthanasia Is Only For The Vaccinated Now
After Another Soccer Player Collapses on the Field, Former Pro and Sky News Sports Announcer Calls for Investigation
Australia makes Auschwitz look like a picnic
COVID Vaccine: Manufacturers Send Out Different Batches - Here Is Proof
They Need Your Children! A New Financial Reset Is Imminent.
Massive Protests Erupt All Over The World Against CONvid-1984 Tyranny: "We'll Never Give Up!" (Videos)
Latest Devastating News on the Vaccine
A TIMELINE OF THE NEXT PLANDEMIC SHOWS SMALLPOX TERROR ATTACK
Hong Kong Are Now Quarantining Healthy People For 21 Days
Are We Already Living in a Brave New World? – Huxley’s Warning to the World
Top Alternative
Tucker Carlson: Why The Media Won’t Investigate Darrell Brooks Motive
The Irony: Euthanasia Is Only For The Vaccinated Now
(Not So) “Smart” Ocean — How Our Newest Technology May Harm Marine Life, EMF/RF/5G
‘Looting’ Deemed Racist Term Against Blacks, Use ‘Organized Robbery’
Covid: A New State Religion?
Australia makes Auschwitz look like a picnic
Mel K & Communications Expert Chris H Discuss Security & Being Prepared With Satellite Tech 11-24-21! - Must Video
They Are Purging Humanity - There Is Nothing Left To Lose - David Icke Talks To Alex Jones
The Rittenhouse Case & the Greatness of an Armed America ~ VIDEO
What Thanksgiving means To Americans