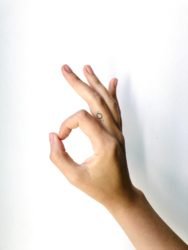 [Editor’s note: Trigger warning, the following essay contains satire. If you are a leftist, you may want to consider not reading this piece until you have regained your sense of humor.]

A few years ago, I learned that the “Okay” hand signal had come to mean white supremacy.  I haven’t heard too much about it since Donald Trump triggered a bunch of snowflakes with it a couple of years ago, but it’s in the news again.  Apparently, Kyle Rittenhouse brazenly flashed the sign at a crowd of people.  In so doing, he provided irrefutable proof of that which the totally reliable CNN had been telling us – Rittenhouse is a white supremacist.

But the “okay” sign hasn’t always meant “white supremacy.” It used to just mean “okay” – you know, as an innocent answer to a question.  That got me to thinking.  If its meaning had changed over time, what other non-verbal communication signals had changed as well?  I don’t want to accidently signal that I’m a cis-gendered homophobe or something.  I decided to do a little research.

As mentioned previously, the “okay” sign (index finger touching the thumb to form a circle) now means “white supremacy.”  I guess because it’s a-okay to be part of the genetically gifted segment of human beings.  In addition to the hand signal, I was surprised to learn that this exclusive group also has a song and dance routine.  They refused to respond to inquiries about secret handshakes.

The “thumbs up” hand signal was made famous by President “The government isn’t the solution, it’s the problem” Reagan.  While it’s meaning remained obscure for decades, given its originator, it was always assumed to have some subversive meaning.  However, since it’s use by Donald Trump, it has become universally accepted as the conservative call to insurrection.

The “thumbs down” sign has recently emerged in the news.  It originated as a hand gesture used by spectators at Roman gladiator games. It literally meant: “kill the Christian.”  It has recently been popularized by justice seeking American patriots outside the Kenosha, WI court house.  Now referred to as the “Kyle” sign, it means: “Let’s grab an innocent kid — with superb target acquisition skills — that defended himself from a murderous mob and send him to prison for the rest of his life.”

An extended middle finger, known as the “bird,” has been a popular hand signal for ages.  Nobody knows where it originated, or what it actually means.  However, it has been adopted as the official salute of Antifa.  When performed with two hands, it means double of whatever it actually means.

The “crotch grab” was popularized by Michael Jackson in the 1980s.  The original meaning is unknown – it may have had something to do with an infection.  It has continued to evolve over the last several decades and is now recognized as Joe Biden’s standard greeting to new female staffers.

Dropping one’s trousers and exposing one’s butt to a crowd of people is known as “mooning.”  It originated in medieval Europe when soldiers would “moon” their adversaries from across a field.  It was simply an unmistakable sign of disrespect.  It is still in use today and its meaning is largely unchanged.  It is often used as sign language for “Let’s go Brandon” in situations where decorum precludes the use of vulgar shouting.

Touching the side of one’s nose with a forefinger has had numerous meanings over the years.  In the early 20th century, it was used by con artists to signal that the game is afoot.  By the late 20th century, it had been adopted by participants in the game of Charades to mean: “you might be on to something.”  However, its meaning in the 21st century has been completely bastardized by Hunter Biden.  It now simply means “got cocaine,” and can be used as either a question or an answer.  Rumor has it that Hunter created this hand signal out of necessity for communication in noisy gentlemen’s clubs.

“Taking a knee” has become an important non-verbal signal.  It is especially significant when performed on a football field – otherwise it’s just someone tying their shoe.  This signal was created by Colin Kaepernick as a protest against something really important.  I wish I could remember what it was.  Since its inception, it has evolved into a general player’s prayer: “Dear Lord, even though my on-field performance sucks, please help me land that Nike endorsement.”

The “V” sign made with two fingers has undergone a radical change in its meaning over the years.  It was popularly used by soldiers to signify “victory.”  However, in the 1960s it was adopted by hippies to denote “peace.”  Nobody seems to know why a “V” would be used to signify “peace” – it probably had something to do with acid.

Except as used in Japanese selfies, it largely fell into disuse for many years.   But now the “V” is back.  It’s also back to its original meaning – as in way back, to its origin as the Roman numeral 5.  When used now, the signaler is noting Joe Biden’s score on the cognitive test.

Crossing oneself originated in the Catholic Church as a sign of reverence to our savior.  It’s meaning has remained remarkably stable over the centuries.  It is frequently used by visitors to Chicago, accompanied by praying a modified version of the 23rd Psalm: “Yea, though I walk through a gun free zone, populated by heavily armed urban youths with no discernable rules of engagement, I shall try to fear no evil.”

Author’s note to Kyle Rittenhouse: Kyle, please don’t sue me.  I don’t really think you’re a white supremacist – and I’m willing to say that under oath.  This is just a satire.

It’s OK To Be A White Guy is posted on Conservative Daily News – Where Americans go for news, current events and commentary they can trust – Conservative News Website for U.S. News, Political Cartoons and more.