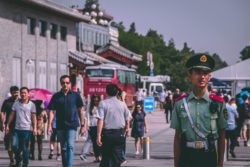 Most people have an innate aversion to causing lethal harm to others.  Military forces work hard to overcome this aversion and condition soldiers to kill enemies in combat.  In some situations, such conditioning takes place in open society as well, and the presence of this conditioning process is often an indicator of impending war or some sort of social or ethnic cleansing.  The opponent is often made to appear as subhuman or as some sort of inferior or even harmful entity that society would be better off without.

During WWII in the US, we saw caricatures of Japanese and German soldiers that portrayed them as brutal, stupid, sometimes comical, more often menacing, demonic, or otherwise not fit for polite society.  Such propaganda helped promote support for the war efforts and made it easier to justify military operations that resulted in both military and civilian deaths.  During the Vietnam period, there were similar, although less successful propaganda attempts.  The enemy were frequently referred to as “gooks” as a way to render them as somehow less than human – vermin to be exterminated.

While such conditioning is considered necessary in war, its use in peacetime is an ominous indicator.  During the period after the Russian Revolution, Lenin and communist leaders were working to fundamentally transform their society along socialist lines.  Among other things, this involved collectivization of farms.  They were opposed by small farmers known as “Kulaks”.  Prior to the revolution, these Kulaks had been encouraged as a way to increase farm production, and they were rewarded with a few cows or small additional plots of land.  These more prosperous farmers were subject to the resentment of their less prosperous neighbors, even though the differences might only be a cow or two, or a dozen acres.  Lenin and his cohorts exploited this resentment during their collectivization efforts, calling the Kulaks “greedy”, enemies of the state, “bloodsuckers, vampires, plunderers of the people and profiteers, who fatten themselves during famines”.  Thousands of them were rounded up, many killed, others sent to gulags, their properties confiscated and redistributed to collective farms.

Worse, though, than the Communists, the Nazis perfected and expanded these methods to use against the Jewish members of their society.  Jews were characterized as brutish, subhuman, greedy, manipulative, spreaders of filth and disease, and evil forces contaminating the purity of the new Socialist society.  These portrayals were used to justify special laws that applied only to Jews, and ultimately to justify genocide and “ethnic cleansing”.  The ensuing Holocaust is one of the blackest periods of history.

Now we have Communist China that has developed techniques to turn its citizens against one another through “social credit”.  It sends those who disagree with their rule to prisons, where they can be taken apart as living organ donors at the whim of the Socialist State.  It deceives its citizens by rewriting history and controlling the information they are permitted to access and the news they are allowed to hear.  It suppresses religion and forces religious leaders to teach a theology that glorifies the State as having divine authority.  Numerous purges have killed millions of those who opposed the State, millions who desired only freedom from tyranny.

Today, the Progressive Left, the spiritual heirs of Communist China, of National Socialism and of the Soviet Socialists, have learned much from those who preceded them.  They employ many of the same tactics in the US and across the world that worked so well for their predecessors.

The Russian Communists called the Kulaks greedy, enemies of the state, filthy capitalists.

The Chinese Communists suppress freedom of speech, of religion, and of association.

We Conservatives know that we are not these things, but we also know that there are others who believe this propaganda.  They use these beliefs to justify censorship of Conservative speech, to “cancel” people for Conservative views, and to perpetrate violence on those who espouse Conservative ideals.

The Nazis saw Jews as unclean, as spreaders of disease and purveyors of filth.

The Progressive Left portrays those who oppose mandatory vaccination as spreaders of disease who are irresponsibly putting others at risk.  Is it only incidental that most of these who oppose such vaccination also happen to be Conservatives?

We have recently seen so many of the values we hold dear, values of liberty, of justice, of family and freedom of worship, of individual rights, trodden under the heavy booted foot of the intolerant State acting in the name of the Greater Good.  We have seen the ideals of the Progressive Left, of social control, of obedience to the State, of suppression of dissention enforced by the very institutions we counted on to preserve and defend our liberties – institutions that were infiltrated and subverted by agents determined to establish their power by any means necessary, forced upon unwilling people under the justification of protecting public health.

The Russian Communists exploited the resentment and guilty greed of the population to enable their scapegoating of Kulaks and to deflect attention from their own injustices.

The Nazis portrayed Jews as using the power of banks to deny the German people the wealth that was rightfully theirs and fueled the resulting anger to build the flames that became the Holocaust.

The Chinese Communists are building resentment of the United States as an entity that is blocking China from taking its rightful place as the dominant global power and they use that resentment to distract their populace from the many injustices they perpetrate on their own people.

The Progressive Left blames Conservatives for the racial inequalities they brought about themselves, for intolerance and division their own policies create and promote, and for the imagined harm of an economic system that has brought unprecedented abundance to a starving world.

The Progressive Left is relentless and ruthless.  Like its predecessors it does not hesitate to lie, to use violence and intimidation, to use power to impose its will, and to turn neighbor against neighbor, friend against friend, and to rend asunder the very fabric of society to secure and increase its power.  Unwilling to abide by any law or rule of society that does not serve its purpose, if the Progressive Left is thwarted in one avenue it will pursue others until it gets its way, even if the greater society has made it clear that such a way is not a direction it wishes to take.

Like its predecessors – the Russian Communists, the Nazis, and now the Chinese Communists, the Progressive Left does not hesitate to use any means available to accomplish its goals, even, as we have seen with BLM riots and Antifa, the use of lethal force.  As we look around, the propaganda of the Left, with accusations of racism, of CRT, the censorship of dissenting voices, the subversion of honest elections, the intolerance being mobilized against those who refuse vaccination by demonstrably harmful substances, the mobilization of State agents like the FBI against those who exercise their legitimate rights of peaceful protest and petition, of the denial of livelihood, of medical care, of participation in society by those whom the Left deems threats – does it seem that there is a conditioning process in operation?

Evil will always seek its own ends regardless of the harm it may cause to others.

Are we being conditioned to accept a “cleansing” of society to remove the Conservative element that the Left finds so objectionable and such an impediment to its dreams of power?  Are Conservatives the new Kulaks and Jews?  Is there a new “Final Solution” in preparation?  Are Conservatives being portrayed as inferior or even harmful, and society can only be saved by purging them?

As must be done with bullies everywhere, the Left must be confronted and made to renounce its objectives of power and control, and be held to account for the harm it has caused before its members can again take a place in an open and equitable society such as we have enjoyed until recently.  Such confrontation will not be easy, it will not be comfortable, and it may fail, but it is absolutely essential if we wish to preserve individual freedom and basic human rights and dignity.  Shall we live as freemen or as slaves – there are no other choices; there is no compromise with evil.

Photo by hitesh choudhary from Pexels

Preparing For The New Holocaust: China’s Authoritarianism Is On The Rise, Is America’s Left Next? is posted on Conservative Daily News – Where Americans go for news, current events and commentary they can trust – Conservative News Website for U.S. News, Political Cartoons and more.