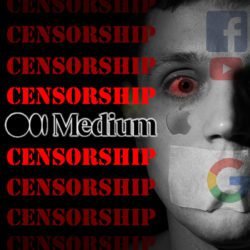 It goes without saying that the epidemic of censorship in the United States is at an incredible, alarming, and intolerable level. Across social media and the internet, platforms are socially engineering “acceptable” speech, expunging “uncomfortable” truths when they don’t fit the preferred narrative of the Woke Left.

From Google to Facebook, Twitter to YouTube, if you dare to point out or opine about anything that transgresses the intellectual poverty of identity politics you will be summarily censored. Today, another internet platform must be added to the growing list of those that “can’t handle the truth” – or at least don’t want the ugly truth of the Fascist Left’s race politics to be discussed: Medium.com.

Medium.com is a platform that, at its genesis, claimed to be an avenue for independent thinkers. Its “about us” page line is, “Every idea needs a Medium.”

From Medium’s about page:

“The best ideas can change who we are. Medium is where those ideas take shape, take off, and spark powerful conversations. We’re an open platform where over 100 million readers come to find insightful and dynamic thinking. Here, expert and undiscovered voices alike dive into the heart of any topic and bring new ideas to the surface. Our purpose is to spread these ideas and deepen understanding of the world.

“We’re creating a new model for digital publishing. One that supports nuance, complexity, and vital storytelling without giving in to the incentives of advertising. It’s an environment that’s open to everyone but promotes substance and authenticity. And it’s where deeper connections forged between readers and writers can lead to discovery and growth. Together with millions of collaborators, we’re building a trusted and vibrant ecosystem fueled by important ideas and the people who think about them.”

But this declaration rings hollow in the face of censorship. Where censorship and social engineering are practiced, “substance and authenticity,” “nuance and complexity,” a “deeper understanding of the world” cannot be achieved. The freedom to discuss and debate hard truths based on fact must exist for any of those goals to be achieved.

On November 19, 2021, I received two emails from “Roger,” a “trust and safety” representative for Medium. The first stated:

I am writing in regards to your post on medium.com: “Why Is the Black Community So Accepting of Violence As the New Normal?”

We have determined that your post is in violation of our rules:

Hateful Content
We do not allow content that constitutes or promotes violence, harassment, or hatred against people based on characteristics like race, ethnicity, national origin, religion, caste, disability, disease, age, sexual orientation, gender, or gender identity.

We do not allow posts or accounts that glorify, celebrate, downplay, or trivialize violence, suffering, abuse, or deaths of individuals or groups. This includes the use of scientific or pseudoscientific claims or misleading statistics to pathologize, dehumanize, or disempower others. We do not allow calls for intolerance, exclusion, or segregation based on protected characteristics, nor do we allow the glorification of groups which do any of the above.

It is now suspended.

Repeated violation of our rules may result in additional suspensions, decreased distribution of your posts, and potential suspension of your account.

After contacting “Roger,” and asking for an appeal process to be executed, I received this response:

“After careful review of the details of the appeal, and the relevant post history, Medium’s Trust & Safety team has concluded that it remains in violation of site policies and will not be restored. The decision at this time is final.”

I have requested specific examples of cited transgressions to their “hate speech” rules. At the time of this writing, there has been no response.

The article was spurred by the story of  Brandon Elliot:

“Brandon Elliot, 38, a parolee who was convicted of killing his mother two decades earlier, was arrested on assault and hate crime charges in an attack on a 65-year-old Asian American woman in New York City that was caught on video.

“The surveillance video showed Elliot kicking and stomping the woman, who suffered serious injuries including a fractured pelvis. She was on her way to church when she was attacked by Elliot who was heard saying, ‘You don’t belong here.’”

It went on to example several other instances of egregious, unprovoked, vicious violence over disagreements and/or because of sheer arrogance, all at the hands of members of the Black community.

The points in the article are backed up with facts brought to bear by Federal Bureau of Investigation/Justice Department crime statistics reports; facts that prove, beyond doubt, that a disproportionate majority of violent crimes are committed by members of the Black Community.

In fact, all anyone has to do is to read reports coming out of Chicago on any given weekend – and especially any holiday weekend – and stories of Black gang violence abound; children indiscriminately shot, innocents murdered, a city in the throes of terror at the hands of unbridled violence, most often (again, confirmed by the FBI/DOJ crime statistics) perpetrated by members of the Black community.

What this now censored article posited was this:

“…Until true leaders in the Black community emerge who initiate a self-examination of the Black culture in an effort to purge the violence that permeates that culture, it is impossible to entertain the idea that any other segment of our society is a ‘threat.’”

The Black Lives Matter movement has exposed itself as nothing more than a gratuitous, opportunistic activist group that seeks to blame every malady found in the Black community at the feet of the White population. This is further exacerbated by the like-minded false narrative of the Marxist-based idiom of Critical Race Theory.

So, the question posed by Medium’s censorship of these verifiable facts is this. What public good did that action, that act of censorship, serve? It certainly didn’t facilitate an honest dialogue on the issue. In fact, it seemingly achieved the exact opposite. It delayed a much-needed honest, fact-based, and, albeit, uncomfortable discussion from happening, even if only in the now-discredited and exposed agenda arena of Medium.com.

The common response from platforms such as Medium, when they are called on the carpet for blatant agenda-driven censorship is that the protection of Free Speech is only affected between citizen and government; that the First Amendment doesn’t apply between parties in the private sector. But this assertion is not only ignorant and shallow, it is demonstrably incorrect.

The American people exist in a constant state of freedom; a state of existence that encompasses every aspect and point made in the Bill of Rights. In fact, the Bill of Rights was crafted by a free people to put government on notice that those enumerated rights are inalienable; a constant in the daily lives for Americans.

This means, necessarily, that private entities – like Google, Facebook, Twitter, and Medium – operate with the knowledge that the rights enumerated in the Charters of Freedom are not circumventable or escapable. That Free Speech protections are the right of the people are constant, irrevocable, and binding to even the private sector.

Race apologists like “Roger” at Medium do more to hurt race relations in the United States when they run interference for the Black community being called out on uncomfortable truths about their culture. They are complicit in each violent crime, each death, each sorrow that comes to be at the hand of Black violence, whether in the Black community out.

The cowardice of people like “Roger” and platforms like Medium is rancidly palpable. Sadly, those of us who wish to have an honest discussion about solutions to the issue of race-based violence have to suffer such stunted intellect and brainwashed attitudes.

“What is freedom of expression? Without the freedom to offend, it ceases to exist.”
– Salman Rushdie

There Is No ‘Medium’ When It Comes to Calling the Black Community Out on Bad Behavior is posted on Conservative Daily News – Where Americans go for news, current events and commentary they can trust – Conservative News Website for U.S. News, Political Cartoons and more.