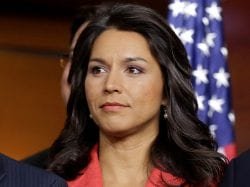 “With no evidence, MSM & antifa-loving politicians immediately labeled Rittenhouse a white supremacist terrorist,” Gabbard wrote. “It’s obvious now that he was just a foolish kid who felt he needed to protect people & the community from rioters & arsonists because the government failed to do so.”

Rittenhouse took the stand on Wednesday, defending his actions on cross-examination from the prosecution. The line of questioning led the defense to ask Judge Bruce Schroeder to declare a mistrial.

“The prosecutor in this Rittenhouse trial obviously did not do his due diligence before making the decision to prosecute,” Gabbard said in a video attached to her tweet. “This tragedy never would have happened if the government had simply carried out its responsibilities to protect the safety, lives and property of innocent people.”

The former presidential candidate’s statements stand in contrast to those of others in the Democratic Party, some of whom have continued to call for Rittenhouse’s imprisonment. Democratic New York Rep. Hakeem Jeffries, who chairs the House Democratic Caucus, posted “lock up Kyle Rittenhouse and throw away the key” Wednesday on Twitter.

CNN’s Jeffrey Toobin said Wednesday that Rittenhouse was lucky it was not “illegal to be an idiot,” based on his behavior but said “it does seem like he has a plausible case of self-defense.” Toobin continued, “homicide’s a different matter and you know he may have a defense here.”