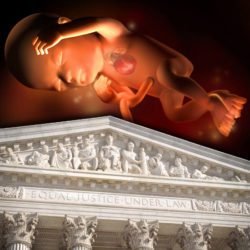 As the United States Supreme Court court hears arguments on a case that could decide the future of the landmark 1973 Roe v. Wade decision, it is critically important that we all understand that any ruling will not outlaw abortion. This is the narrative being shopped to the naïve by disingenuous far-Left opportunists.

The current case before SCOTUS, Dobbs v. Jackson Women’s Health Organization, centers on a Mississippi law that bans abortion after 15 weeks of pregnancy, three weeks past the end of the first trimester. Roe v. Wade, reaffirmed by the subsequent ruling in Planned Parenthood v. Casey circa 1992, allows states to regulate but not ban abortion up until the point of fetal viability, at roughly 24 weeks.

Although the SCOTUS ruling in the Mississippi case won’t be known for months, based on opening arguments, there is reason to believe that the future of Roe v. Wade will look quite different from its current form.

All six of the court’s conservative Justices including Neil Gorsuch, Brett Kavanaugh, and Amy Coney Barret appeared to be leaning toward upholding the Mississippi law.

The Pro-Life movement is looking to press its advantage in state-by-state battles while abortion-rights supporters prepare to play defense. Both sides seem to be operating on the assumption that the High Court will either overturn or seriously weaken Roe.

While the Pro-Abortion movement is attempting to sell the narrative that an upending of Roe v. Wade would be the end of abortion rights, that narrative is patently false; a false narrative meant to both deceive and emotionalize the issue.

I truth, this was exactly how issues like abortion – issues not specifically enumerated in the US Constitution and Bill of Rights – were supposed to be addressed: at the State level. That they are not is the byproduct of an overreaching and usurping federal government.

With regard to the false narrative of Roe v. Wade culminating in an outright ban on abortion, one would have to willingly suspend disbelief to accept the notion that California, Oregon, Washington, Illinois, New York, Massachusetts, and all of the glow-in-the-dark cobalt blue States would move to outlaw abortion. In fact, it is more likely they would immediately craft more liberal legislation.

Also true, conversely, is that those States with more conservative populations (i.e. Florida, Texas, Alabama, South Dakota, South Carolina, etc.) would most likely reflect the will of their citizenry in their crafted legislation on the matter.

Again, this is exactly what the Framers intended when they created the compact that is the United States Constitution and Bill of Rights. It is for this exact moment in time they purposely included the Tenth Amendment:

“The powers not delegated to the United States by the Constitution, nor prohibited by it to the States, are reserved to the States respectively, or to the people.”

Respecting the Tenth Amendment affords those who choose to seek an abortion the ability to travel within the United States to achieve their goal. It also affords those who find the practice to be murder to live in a State – and amongst people – who feel the same.

While the reality of that freedom may move the devout in each of the abortion debate camps to ire, it highlights the delinquency and cowardice of the medical community – both here in the United States and around the world – in their abdication of defining a consensus on the beginning of life.

It also illustrates the Left’s opportunistic selective advocacy for “experts.” If they were serious about “following the science” then the abortion issue would be a matter of science, not a matter of emotion or politics.

But, for now, abortion remains an issue in turmoil and one that the politically opportune will attempt to exploit on both sides. Meanwhile, emotions will be ginned-up through the use of fear-mongering propaganda, and the medical community with painfully contort itself not to be called on to make a defining diagnosis.