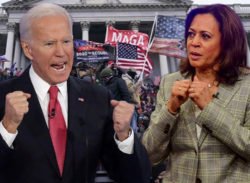 The chief political rule in Progressive Democrat politics is this. Never let a crisis go to waste. On the first anniversary of the protests of January 6, 2021, President Biden and Vice President Harris didn’t disappoint their far-Left base where fidelity to that rule is concerned.

In carefully-crafted speeches meant to mark the first anniversary of the protests, both Biden and Harris pivoted from the reason for their appearances to demand the Senate pass legislation to co-opt US federal elections to federal purview.

Fear-mongering (which has become the only tool in the Biden-Harris political quiver), they both declared that a failure to steal federal election purview from the States through legislation would put the future of American democracy at stake.

Harris, citing the January 6 protests as evidence of how fragile American democracy has become, claimed the protesters were trying to overthrow democracy:

“Here, in this very building, a decision will be made about whether we uphold the right to vote and ensure free and fair elections. Let’s be clear: We must pass the voting rights bills that are now before the Senate,” Harris said. “The fragility of democracy is this, that if we are not vigilant, if we do not defend it, democracy simply will not stand. It will falter, and fail…We cannot let our future be decided by those bent on silencing our voices, overturning our votes, and peddling lies and misinformation; by some radical faction that may be newly resurgent but whose roots run old and deep.”

Biden was less direct about advocating for the election legislation, although he didn’t shy away from politicizing the anniversary:

“The former president and supporters have decided the only way for them to win is to suppress your vote and subvert our elections. It is wrong. It’s undemocratic. And frankly, it’s un-American,” he said. “I will stand in this breach, I will defend this nation, I will allow no one to place a dagger at the throat of democracy. We will make sure the will of the people is heard, that the ballot prevails, not violence.”

It needs to be made clear – crystal clear – that the only insurrection that took place on January 6, 2021, was the usurpation of the Electoral College process of objecting to the Elector vote certification under the Electoral Count Act of 1887. The abandonment of that process – which is constitutionally legislated – was the only act of insurrection that took place that fateful day, and was perpetrated by those in control of the House floor at the time.

What took place on the Capitol Complex grounds that day was a legitimate protest that turned chaotic and, in only one instance, violent: the use of deadly force executed at the hand of Capitol Hill Police Department lieutenant Michael Byrd, who shot Ashli Babbitt, an unarmed US Air Force veteran.

Again, to be crystal clear, violent protest is never the answer to contested governmental action in a civilized society unless the government being protested has turned despotic, tyrannical, and against the US Constitution. But, as corrupt as Washington politics has become, the constitutional and codified process of objecting to the seated Electors to the Electoral College was playing out on the floor of the Capitol.

Article II, Section I of the US Constitution states:

“Each State shall appoint, in such Manner as the Legislature thereof may direct, a Number of Electors, equal to the whole Number of Senators and Representatives to which the State may be entitled in the Congress: but no Senator or Representative, or Person holding an Office of Trust or Profit under the United States, shall be appointed an Elector.”

The objections to the seating of the Electors from several states were prompted by both direct requests by those States’ legislative leaders and the usurpation of the legislated manner of Elector certification codified in each of those States. These Electoral College objections were the last legitimate challenge to an election that many believe was corrupted under the loose voting processes instituted to facilitate voting through the COVID pandemic (remember the rule: never let a crisis go to waste).

Because of the politicization of the events of that day, we may never know the identities of the people who ginned up the violence or for whom they worked. But the multitude of questions surrounding the violence of the protest, prompted by the litany of readily available information to include video from inside the Capitol Building, remain valid.

As Congress itself refused to seat an official congressional panel to examine the events of that day – and as the Capitol Hill Police, District of Columbia Police, and the Department of Justice still have open investigations into the matter, the unilateral seating of the January 6th Commission by House Speaker Nancy Pelosi (D-CA), was both irresponsible and an over act of political opportunism. The commission never should have been seated and must – if we are to be honest with ourselves – be seen as partisan and illegitimate.

That said, two things are perfectly clear – or crystal clear.

First, the true insurrection, if in fact one occurred, was in the cessation of the legitimate process of objecting to the votes of the Electors from States whose voting protocol was usurped unconstitutionally. Given that the far-Left and tacticians from the national Democrat Party routinely use “bright shiny things” to distract the public from what they’re really trying to achieve, the theory that the chaos and violence of that day were manufactured should be legitimately considered.

But more importantly, it is critical that every American recognize the power-grab attempt that is the co-opting of federal election purview by the power-hungry politicians in Washington from the States. This is what the election law Biden and Harris were pushing in their speeches is – an unconstitutional power-grab, and Biden and Harris – and their fascist handlers – were hoping to manipulate the public emotionally into supporting that effort.

Unless we are to allow our nation to fall to the Marxist fascism of Central Planning, where the individual State governments are completely cuckolded to the federal government, we simply must draw the line at allowing the ambitious of power to completely destroy the form of government our Framers actually created. They have already done enough damage in passing the 17th Amendment in the quest to hobble the States into subservience to the all-powerful federal government.

Biden, Harris Use Anniversary of Jan. 6th Protests to Lobby for Federal Election Takeover is posted on Conservative Daily News – Where Americans go for news, current events and commentary they can trust – Conservative News Website for U.S. News, Political Cartoons and more.