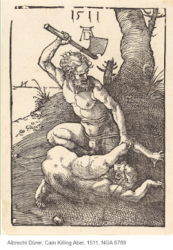 Cancel culture is not new.  It has been used for generations to impose a different worldview.  In the biblical Book of Genesis, Cain and Abel are the first sons of Adam and Eve. Cain, the firstborn was a farmer, and his brother Abel was a shepherd. The brothers made sacrifices to God, but God favored Abel’s sacrifice instead of Cain’s. Cain then murdered Abel out of jealousy, whereupon God punished Cain by condemning him to a life of wandering.

To enforce Protestant orthodoxy,  for example, England used the same tactics as the Taliban and the Chinese during the Cultural Revolution, or the Puritan vanguard whose mission was dedicated to the destruction of an entire world view. Consider the following close paraphrase and where this might have taken place:  “The full thrust of this change in world view was not apparent until actually controlled the society in which they lived. Once in control they quickly and steadily replace the traditional culture.  Sports, dance, music and games whether practiced by the middle or upper class, all went. Dress, adornment, and hairstyle for both sexes, the upbringing of children, the conduct of businesses., there was nothing that was not changed.  Marriage became a Civil service no longer performed in church .  Not only Christmas. But Easter & other holy days disappeared from the calendar“

It could be the United States in 2022 under Democrat control – right?

But it is not Cuba

Let’s review just a few instances of cancel culture in the United States. On September 8, 2021, NPR published a piece titled:  Virginia’s Massive Robert E. Lee Statue Has Been Removed— was lifted into the air by a crane

On Wednesday, the state of Virginia removed the 12-ton statue of Confederate Gen. Robert E. Lee more than 130 years after it was installed in Richmond.

Despite its massive size, it was lifted from its pedestal in one piece and is headed for storage. Gov. Ralph Northam, a Democrat, was there as the statue came down and appeared pleased by its removal. A crowd also chanted and cheered as the statue of Lee — atop a horse — was lifted into the air by a crane

As soon as Joe Biden was installed President, Democrats pushed for a restoration bill as described by Forbes’ Gina Heeb in the piece titled
Democrats Push For Reparations Bill, Testing White House Support

Congressional Democrats renewed their push for a federal study of racial reparations at a committee hearing Wednesday, the latest test of whether President Joe Biden would support compensation to Black Americans for centuries of slavery and systemic racism in the U.S…..
It has garnered the support of more than 170 co-sponsors in Congress, Representative Sheila Jackson Lee, who introduced the bill known as H.R. 40, said at the House Judiciary subcommittee hearing

Then there is Critical Race Theory – CRT including Diversity, Inclusion, and Equity.  CRT has spread like leaven and can now be found in public schools, state and federal governments, including the FBI and the military. The latest entry seems to be the Salvation Army.  Seems like a new artifact, but the Church invented #DIE 2000 years ago.  While James Joyce’s character Here Come everybody (ECE) points to that fact, the Church has a saint for everybody.  There is my saint.  You know, Saint Drogo, patron saint of coffee and ugly people.  There is a patron saint for mixed races in Saint Martin De Porres or even Saint Francis, patron saint of ecology and animals. Then there is Saint Benedict – protector against evil spirits and protection from the snares of the devil.  But the Woke DIE is not the same as the Church’s. The Woke DIE is obsessed with skin color, sexual preference, and the most good for the least effort.  The Church asks Christ to help it become more like Him and to accomplish all He asks according to the will of the Father.

As a way of comparing the contemporary Cancel Culture, consider Eamon Duffy’s Stripping of the Altars: Traditional Religion in England provides a disturbing description of the atrocities perpetrated by those assigned to enforce Protestant orthodoxy including the destruction of cultural & religious objects.   Michael Wood, BBC historian, and documentary filmmaker compares it to tactics used by the Taliban & the Chinese  Cultural Revolution

Cancel Culture Has Been used to Impose a Different Worldview for Millennia is posted on Conservative Daily News – Where Americans go for news, current events and commentary they can trust – Conservative News Website for U.S. News, Political Cartoons and more.