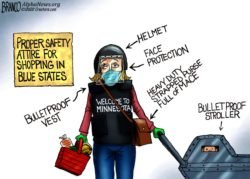 Recently Howard Stern, the former anti-everything shock-jock but now yes-man in the back pocket of intrusive government and mandated masking and vaccinating, said that “anyone unvaccinated should be not allowed into a hospital…they’re going to die”. Geraldo Rivera a few weeks ago said that “the unvaccinated are arrogant, selfish, SOBs and should be marginalized by society”. Both of these gentlemen are ignorant of the basic fact that covid is 99.7 percent survivable, especially if the victim is vaccinated, as they both are. So what’s the beef?

This is all typical hateful, close-minded behavior from the political left in America, who will not allow anyone to live around them if these people are not practicing Democrat racists and bigots. For these individuals, when a Democrat president issues an order to mask-up and get vaccinated, this order must be followed, or else…

Has the good Mr. Stern not heard that fully vaccinated and boosted people are contracting the Wuhan disease, passing it on to other people, and some are even dying of it? How can he be so blind and close-minded to the truth of this relatively weak, nearly always survivable disease?

One wonders how carefully people like Stern, Rivera and the crews at CNN, MSNBC, ABC, The New York Times and other leftists have considered their stand on vaccinations and the unvaccinated.

In their youth, and possibly even in their current, more advanced years, I would not be surprised if firm haters-of-the-unvaxxed abused their bodies with an occasional recreational drug to relieve stress, perhaps a glass or two of alcohol, possibly a few occasional cigarettes to calm them, and they may also have grabbed a quick bite of fast-food as they hurried to an engagement. And if, after abusing their bodies with this harmful junk for years, they got sick, they have every right to expect an emergency room or a hospital to give them assistance to get well again, even if they OD on voluntarily consumed drugs. Along the same path of thinking, if people who practice dangerous personal habits like unprotected, random homosexual sex or sharing a needle, get sick, they will certainly expect medical help to overcome the illness.

On the other hand, a typical unvaccinated person is healthy these two years into the Wuhan pandemic, likely to not smoke, not drink alcohol, not experiment with drugs and not practice unsafe sex. They pay attention to health, and that’s why they don’t want to take an unapproved, experimental drug that has already proven them correct in their reluctance to take it because of the various reports of diverse reactions recently coming to light. And those critical of the unvaxxed are evidently unaware of the fact that even vaccinated and boosted people are getting the disease, passing it on and often dying of it. The vaccine is proving to not be a real vaccine like the Polio vaccine was, but rather it’s just a therapeutic treatment for those who already have the disease.

The point is that the unvaccinated are just people, similar to far-left Democrats, but much more nuanced and thoughtful, and to suggest that they should not get medical assistance when they get sick is Hitlerian in its view of medicine and human assistance. And anyone who believes that the vaccinating and boosting are really keeping them safe should have no trouble mixing in society with the unvaxxed, because the virus is there all the time and doesn’t respect masks nor weak vaccines when seeking a victim. Those who are into their third year of this disease and have not become sick yet, probably had a weak case of covid and never noticed, and are now naturally immune.

I’d rather propose, as Mr. Stern did, that no one who has smoked regularly, taken drugs for fun, drank to excess , had random unprotected sex or shared a needle with someone else, and especially someone who ODed on drugs, should be denied medical assistance as pay-back for their stupidity, but I refuse to be that unfeeling and uncaring about my fellow inhabitants of earth.

One must also realize that people who drive without a seatbelt, or ride a bike or motorcycle without a helmet, or drive while drunk, and even worse, people who attack other people with guns or knives and are shot by the police to halt that attack, are given medical assistance, even though each instance above was a violation of all we know to be wise and correct, and still, radical left individuals insist that government mandates to mask or get vaccinated should be obeyed, or else the disobeyer can die. This is not the liberalism I grew up with, but rather it’s a totalitarian rule of big government and really stupid people.

Howard Stern And Other Celebrities Demonstrate Their Close-Minded, Uninformed Foolishness About The Unvaccinated is posted on Conservative Daily News – Where Americans go for news, current events and commentary they can trust – Conservative News Website for U.S. News, Political Cartoons and more.