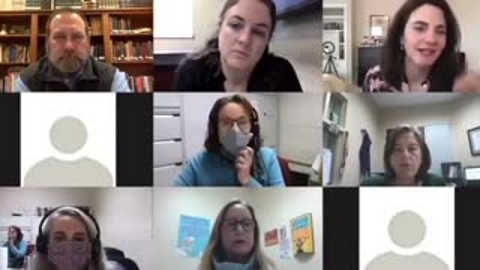 Nina Jankowicz, the director of US President Joe Biden’s newly created Disinformation Governance Board, was recently in an online meeting and said that people just can’t be trusted. In fact, they can’t be trusted to the point where she and others should be allowed to put a context that they create on your tweets, much like the self-appointed, bought-and-paid-for “fact checkers” do on other social media platforms. One problem: It’s completely against the First Amendment’s protections of our free speech.

RT has the story.

Nina Jankowicz, the director of US President Joe Biden’s newly created Disinformation Governance Board, has called for enabling blue-check Twitter users to help police commentary on the social media platform by allowing them to edit tweets that they consider to be false or misleading.

Jankowicz has a blue check on the platform herself.

She made her comments in a viral video that surfaced online on Tuesday. After lamenting that many verified Twitter users don’t deserve to have blue-check status because they aren’t trustworthy, she said, “So verified people can essentially start to edit Twitter the same sort of way that Wikipedia is so they can add context to certain tweets.”

For example, Jankowicz argued, if former President Donald Trump weren’t banned from Twitter and posted a message claiming that there was voter fraud in the 2020 presidential election, a verified user could add context, such as information from lawsuits concerning the issue or comments by a state election official. Giving verified users such power would provide “context so that people have a fuller picture rather than just an individual claim on a tweet.”

Twitter already includes warning labels to steer the narrative about sensitive topics, such as Trump’s election claims and the Covid-19 pandemic. It also offers a reply button for users who want to refute a user’s claim or add context.

Jankowicz’s comments appeared to have been made on a video conference call. The other participants weren’t identified in the clip that was posted online. At least two of those on the call were wearing masks, despite the meeting being held through a Zoom call, rather than in person.

Plans for the new Disinformation Governance Board were first revealed publicly late last month by US Homeland Security Secretary Alejandro Mayorkas – two days after billionaire Elon Musk reached an agreement to buy Twitter and vowed to restore freedom of speech on the platform.

Jankowicz, a self-described “disinformation expert” who previously advised Ukraine’s foreign ministry and authored a book entitled, ‘How to Be a Woman Online,’ was named executive director of the board despite having a history of spreading false information herself. For instance, she called the New York Post’s October 2020 scoop on Hunter Biden’s abandoned laptop a “Russian influence op,” which it was not.

Derisively nicknamed “Biden’s Minister of Truth” by critics, Jankowicz also called for social media platforms to censor allegations that Covid-19 leaked from a Chinese lab and claimed that online mockery of Vice President Kamala Harris and other Democrat politicians was a threat to national security and democracy. She responded to news of Musk’s Twitter takeover by saying, “I shudder to think about if free speech absolutists were taking over more platforms, what that would look like for the marginalized communities, which are already shouldering disproportionate amounts of this abuse.”

She’s also dumber than a box of hammers on the Critical Race Theory issue as well.

I agree with Senator Rand Paul who said that government has no place in the matter of free speech and ideas.