The National Aeronautics and Space Administration has robbed the American people of trillions of dollars, been a propaganda arm of the US government and lied to us, the People.  Now, it appears they are involved in the global depopulation agenda due to a pdf document found on their website.

Here’s the document put together from slides obtained here by Stop the Crime.

Nasa The future of War by Tim Brown on Scribd

Notice the first couple of slides in this presentation.

“This Presentation is meant to incite thought/discussion” and “Is based in all cases upon existing data/trends/analyses/technologies (e.g., NO PIXIE DUST).” 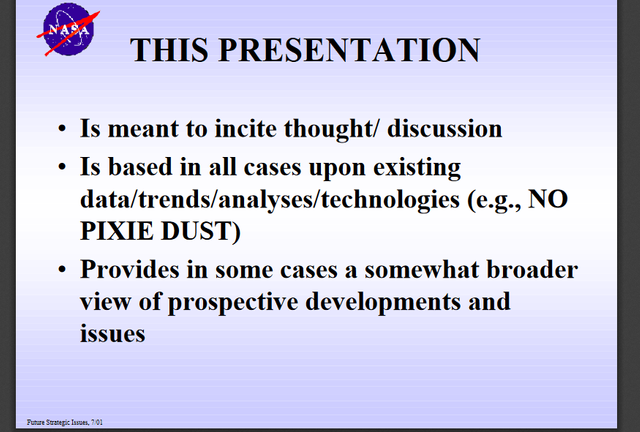 The second slide provides a number of global intelligence and defense agencies, including many of our own. 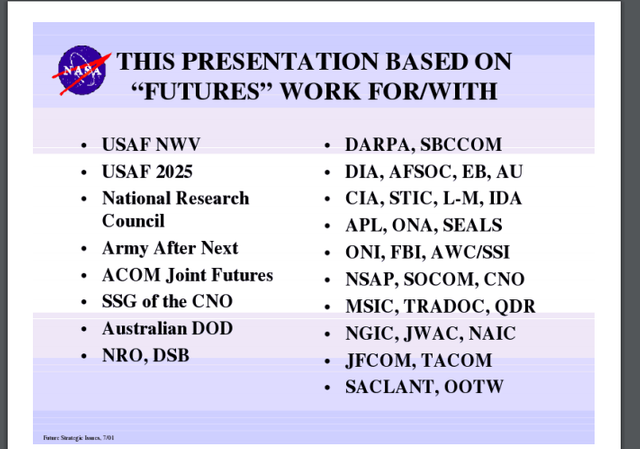 Then there is a slide titled “Inexpensive Motivational Asynchronous Web-Based Distance Education Enables.”

Notice what it lists: 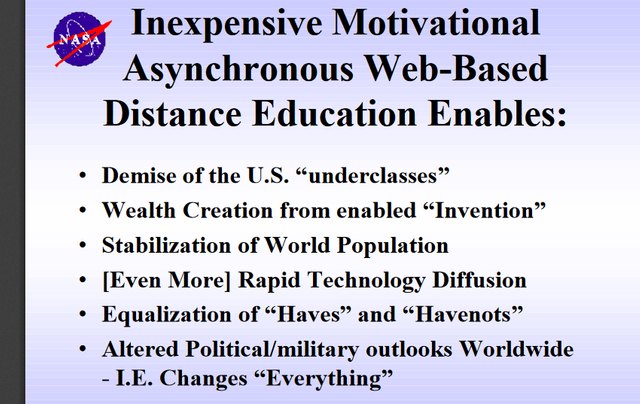 Joziah Thayer comments on the above slide:

The first thing we have to ask ourselves is what do these terms mean? What is a “Have” or “Havenot”? Is this the Hunger Games? Or reality? One could interpret it as classism or the wealth gap, mix with uncontrolled rampant capitalism, and widespread nationwide homelessness could be what they mean by the equalization of “Haves” and “Havenots.” The fact that global issues like hunger and war could all be ended by those in power is further proof that it all may be by design. Jeff Bezos has enough money to end homelessness but he chooses not to. This is exactly what many have been yelling about for the last decade, instead of giving the masses to means to succeed those in power are purposefully holding us back and keeping us in check. The evidence is right in front of us, and NASA will never explain to us what they are talking about in these slides or what they mean, it is up to us.

“Rapid Technology Diffusion”, now what exactly does that mean NASA? According to Wikipedia Diffusion means “the net movement of anything (e.g., ideas, ions, molecules) from a region of higher concentration to a region of lower concentration. Oh, so you mean like highjacking technology and medicines that could help better civilization, and instead keep it for the rich and powerful? Another frightening thing that is casually mentioned in this slide is the “Demise of the U.S. underclass.” Again please do not expect NASA to hold a press conference and explain what the demise of the underclass means, but what it sounds like to me is that NASA you know, the space agency, is talking about creating technologies to assist in the demise of the U.S. underclass. These terms like “underclass” “haves” and “havenots” are not familiar terms to everyday Americans. However, it does not take a rocket scientist to decipher what NASA means. It’s Population Control. The next part I will address is “Stabilization of World Population.” Controlling the world’s population, stabilization of the world’s population, whatever you wish to say it’s meaning cannot be mistaken. It is Population Control. It is an abhorrent mid-evil practice of making sure poor people don’t spoil the fortunes of the rich and powerful in the most grotesque way possible. This, in combination with the “Rapid Technology Diffusion”, solidifies the theory that cures to long-standing diseases like cancer or other terminal illnesses could have been cured years ago, but instead the knowledge and technologies to do so are kept from the public in order to maintain the “Stabilization of World Population.” Out of all of the things mentioned, I believe that the most blatant one happening in front of our eyes right now is “Altered Political/military outlooks Worldwide- I.E.  Changes “Everything.” Based on the fact that this slide was entitled: “Inexpensive Motivational Asynchronous Web-Based Distance Education Enables” This is a fancy name for psychological operations or py-ops. Why is NASA building technologies to alter people’s political and military outlooks worldwide? Furthermore, why does this future warfare presentation seem to be focused on U.S. citizens and the global population as a whole?

Along with these, there are others that promote the idea that humans are the problem with the world.  Now, in one sense that is true in that men, created in the image of God, are sinners, but what these documents portray is something completely different that advances the climate change hoax agenda. 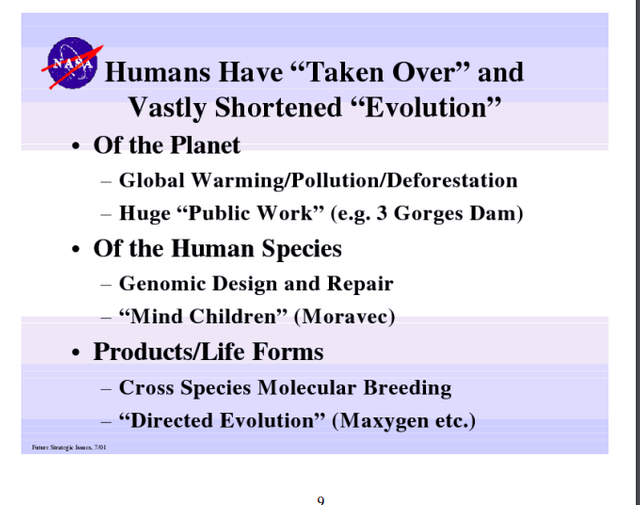 That’s right!  Humans have  “taken over” and vastly shortened what they call “evolution.”   Well, we were instructed to take over and have dominion over the earth and the Creation (Genesis 1:26, 28) and that has never been rescinded!  We were instructed to be fruitful and multiply (Genesis 1:28) and that command was never rescinded either!  Population control is never mentioned by the Creator.  He speaks just the opposite of the current agenda.

Of course, evolution is not part of Scripture either, but notice all the things listed.  These people appear to want to play God, which is exactly what their father, the devil, did.  We’re even hearing of open talk of this ideology from the World Economic Forum.  These are just a few examples, there are many more.

These should be enough to peak your interest about the document put out by an agency that utterly lied to the world about going to the moon.  Not only is there ample evidence to demonstrate they lied, but a recent deathbed confession provides witnesses to the moon landing hoax.  If they will lie like their father (John 8:44) about a fake moon landing to deceive the world, what else would they lie about?

There’s more on this document in the following video.

In the end, you must come to your own conclusions, but given the track record of tyrants, the US government and NASA, my bet is they are all in favor of a population control agenda and it must be stopped by those who are being targeted.