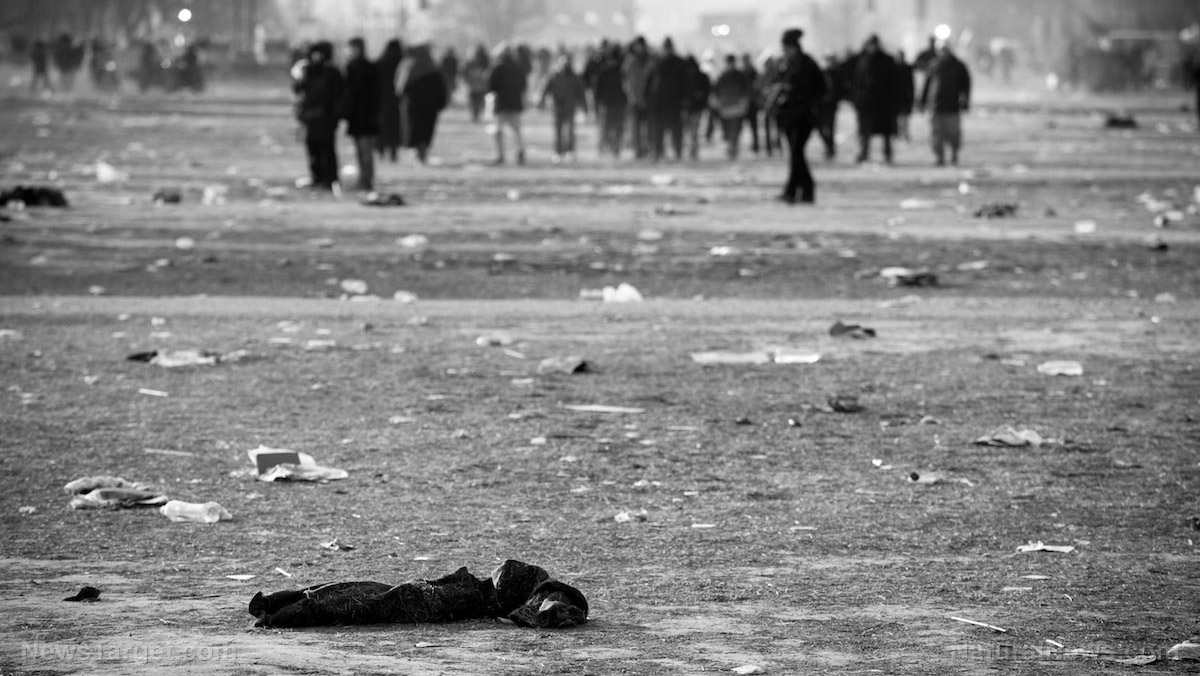 The stage is being set by Democrats and the complicit left-wing media (CNN) to turn Jan. 20th “Lobby Day” in Richmond, Virginia into a false flag bloodbath that will attempt to frame gun owners as terrorists and provide the justification for state-wide martial law and the confiscation of all firearms from citizens.

Ultimately, the plan is to escalate the conflict into regional civil war and widespread chaos that Democrats hope could help destabilize America and remove Trump from office, no matter what it takes.

We are issuing this urgent warning because all the signs of this imminent false flag are rapidly falling into place. For example, yesterday the pro-infanticide, blackface-wearing Governor of Virginia, Ralph Northam, issued an executive order filled with false, deliberately deceptive information that lays the groundwork for framing gun owners as terrorists. That executive order is found at this link and is entitled, “DECLARATION OF A STATE OF EMERGENCY DUE TO POTENTIAL CIVIL UNREST AT THE VIRGINIA STATE CAPITOL.”

The EO falsely claims that “credible intelligence” has determined that armed militias intend to engage in “violence, rioting, and insurrection.” This is further confirmed by Gov. Northam telling left-wing media sources that, “armed militia groups plan to storm the Capitol.” (See The Organic Prepper.)

Newsbusters is reporting that CNN is already laying out the Charlottesville narrative, preparing to blame gun rights supporters for the violence that left-wing operatives are conspiring to cause.

Dave Hodges’ The Commonsense Show is also hearing from sources that say Antifa operatives are already in place, preparing to dress up like Trump supporters and commit acts of violence for CNN’s cameras. It’s all theater, of course. But in this case, at least, they can’t cover their faces with black masks, so it’s going to be more difficult for them to pull this off (watch for them to cover their faces with patriotic-looking American flag bandanas to avoid being identified). As Hodges writes:

Antifa has long been rehearsing the belt-buckle strategy. This is where Antifa will dress up as Trump supporters, wearing MAGA hats and start trouble against the Left, or Northam’s storm troopers at the roadblocks.

As we previously reported on NewsTarget.com, Virginia Democrats have long been plotting to unleash martial law and attack the Second Amendment by rolling out roadway checkpoints where all firearms would be illegally confiscated from law-abiding citizens. This effort is intentionally designed to spark kinetic attacks on law enforcement, granting Northam the justification to declare a state-wide emergency and label all gun owners “terrorists.”

After passing extremely restrictive anti-gun legislation in early 2020, Virginia has a plan to deploy roadblocks at both the county and state levels to confiscate firearms from law-abiding citizens (at gunpoint, of course) as part of a deliberate effort to spark a shooting war with citizens.

Their end game is to unleash a sufficient amount of violence to call for UN occupation of America and the overthrow of President Trump and the republic. Such action will, of course, also result in the attempted nationwide confiscation of all firearms from private citizens, since all gun owners will be labeled “domestic terrorists” if they resist.

The purpose of the roadblocks, to repeat, has nothing to do with public safety or enforcing any law. It’s all being set up to spark a violent uprising against the Virginia Democrats and whatever law enforcement goons are willing to go along with their unconstitutional demands to violate the fundamental civil rights of Virginian citizens.

We call on the DOJ to arrest VA Gov. Northam and Virginia’s treasonous Democrat lawmakers before they ignite a shooting war

One obvious solution to all this is for the DOJ to arrest VA Gov. Ralph Northam and his top Democrat co-conspirators for attempting to carry out acts of treason against the United States of America. It’s time that these criminals be arrested and brought to justice. Sadly, it increasingly appears that the DOJ is part of the corrupt deep state that’s actively working against Trump and the American people. The DOJ is playing a “long con” on patriots, claiming that if we just keep waiting, sooner or later they will get Comey, Brennan and Obama. Maybe even Hillary. It’s all a con. There is no intention to ever hold those people accountable for anything. The entire DOJ strategy, along with the FBI, is to keep the patriots in check while they plot the overthrow of America.

If the DOJ won’t do its job and arrest Northam for treason, it’s probably only a matter of time before the good people of Virginia decide to put their own house in order by arresting and removing these treasonous criminals from public office. This is why Virginia’s lawless, dangerous Democrats keep changing all the rules to shore up their own power.

So Virginia introduces a bundle of radical laws to destroy 2A rights, militias, sale transfer and registration bills, and the People of Virginia says no, and we’re going to vote you all out next term.

Virginia says we’re not going to wait, we’ll petition your removal from office and gets almost a 3rd of the 240K signatures to remove the governor and starts petitions to remove delegates.

Virginia government responds by introducing a bill to raise the amount of signatures from 10% of the prevailing vote, to 25%.

Folks, this is the a textbook example of tyranny. “We’re the government, and we’ll do anything we want, whether you like it or not. We won’t let you vote us out, we won’t let you remove us from office…. And if you can’t possess the weapons that a militia would need to force us out, of office, then there’s absolutely nothing you can do about it.”

Prepare for WAR: The Democrats are launching all-out attacks on America and all those who try to defend her

Prepare for Democrats to initiate WAR! The Democrats have already declared their intentions against America and its citizens. Democrats are lawless, dangerous, criminal-minded lunatics and terrorists who abuse their power to destroy the liberties and civil rights upon which America was founded.

Gov. Ralph Northam is a treasonous criminal who has betrayed all Virginians. He is an affront to America and a clear and present danger to the liberties of all good people across this nation. He must be stopped, defeated and removed from office.

The Democrats know that Americans are about to make a stand against tyranny, and those Dems plan to stage acts of violence to try to discredit the organic uprising against tyranny. So roll your cameras 24/7 when you’re in public. We must capture these treasonous actors in the act and expose their criminal terrorism plots for all the world to see.

The time has come to stand up against tyranny and defeat it. No wonder Northam is demanding a ban on firearms, since the citizens of Virginia have every right to invoke the Second Amendment to defend their lives, their families and their state against the lawless tyranny that Northam is attempting to bring down upon innocent people who have violated no law.

The real criminals are the treasonous terrorists running Richmond.

Loading...
"Not by might, nor by power, but by my spirit, saith the Lord of hosts." Zechariah 4:6
Read it..
BEFORE IT'S NEWS
SIGN UP FOR OUR NEWSLETTER
Today's Top Stories
Sarah Westall: Whistleblower Brutally Beaten, Coronavirus Explained From Chinese Healer, Hired Mercenaries
The Dollar Will Collapse Within Weeks! What Will Replace It? - Must See Video!
Q: Hollywood Is Burning! Is Barron Trump Q? Barry's Belated Impeachment? Best Is Yet 2 Come! - Great Video
Jason A - Unexplainable Events Happening in 2020!
The History And Mission Of The Nazi-Illuminati Bush (Scher(f)f) Crime Family
David Abel Exposed As Crisis Acting Freemason On Board Diamond Princess Cruise Ship
Mark Taylor: Q! Gloves Are Off, Fight Is On
Billy Meier Predictions and Prophecies Are Now Being Proved Correct
Q3649: It's Going to Be Biblical! An Epic Response to Mayor Pete Saying We Can't Be Christians! Great Video!
Worldwide Virus Alert! Millions Infected & Spreading! - Must See Video!
Loading...
Featured
Bombshell Secrets Revealed! Behind the Veil of Mass Deception: Just How Fake Is the [Fake News]?! Great Video!
"Turn Off Your Camera and Step Out of the Car" New York State Extortion Stop
Health Officials Prepare for COVID-19 Throughout USA.
Did a Senior Chinese Military Intelligence Officer Call the Coronavirus a Hoax or Did Dean Koontz Write A 'Novel' Virus Sequel?
The 5G Trojan Horse: What You’re Not Being Told
‘Whom the gods would destroy – they first make mad’ – COVID-19 Hysteria goes global
🚨CORONAVIRUS: Who is Paul Cottrell; an embedded Gov’t Plant / Agent, Zionist Schill (“Snake in the Grass”)?
Whistleblower found dead
Q: You Have Come Far, Anons (Patriots)! You Are Ready! A Public Awake Is Their Greatest Fear! - Great Video
US Now Admitting Coronavirus Has Broken Containment Beyond China! - Great Video!