It's Not Just the Jews, Another Reason for the US's Endless Wars: Without Them, the $US Would Collapse 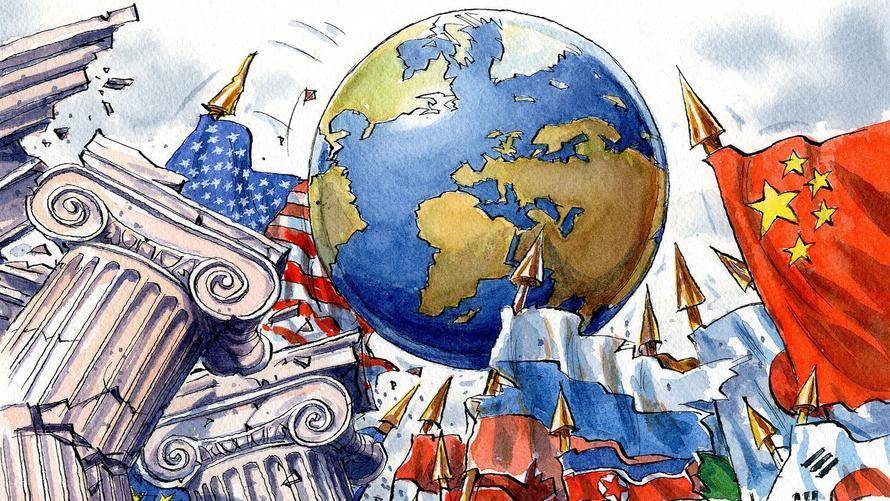 In short, US foreign policy is geared very much toward controlling oil resources as part of a larger strategy to prop up the US dollar. Hudson writes:

The assassination was intended to escalate America’s presence in Iraq to keep control of the region’s oil reserves, and to back Saudi Arabia’s Wahabi troops (Isis, Al Quaeda in Iraq, Al Nusra and other divisions of what are actually America’s foreign legion) to support U.S. control of Near Eastern oil as a buttress of the U.S. dollar. That remains the key to understanding this policy, and why it is in the process of escalating, not dying down.

The actual context for the neocon’s action was the balance of payments, and the role of oil and energy as a long-term lever of American diplomacy.

Basically, the US’s propensity for driving up massive budget deficits has created a need for immense amounts of deficit spending. This can be handled through selling lots of government debt, or through monetizing the debt. But what if there isn’t enough global demand for US debt? That would mean the US would have to pay more interest on its debt. Or, the US could monetize the debt through the central bank. But that might cause the value of the dollar to crash. So, the US regime realized that it must find ways to prevent the glut of dollars and debt from actually destroying the value of the dollar. Fortunately for the regime, this can be partly managed, it turns out, through foreign policy. Hudson continues:

The solution [to the problem of maintaining the demand for dollars] turned out to be to replace gold with U.S. Treasury securities (IOUs) as the basis of foreign central bank reserves. After 1971, foreign central banks had little option for what to do with their continuing dollar inflows except to recycle them to the U.S. economy by buying U.S. Treasury securities. The effect of U.S. foreign military spending thus did not undercut the dollar’s exchange rate, and did not even force the Treasury and Federal Reserve to raise interest rates to attract foreign exchange to offset the dollar outflows on military account. In fact, U.S. foreign military spending helped finance the domestic U.S. federal budget deficit.

An important piece of this strategy has been a continued alliance with Saudi Arabia. Saudi Arabia maintains the world’s largest capacity for oil production, and it was the largest single producer of crude for most of the period from the mid-1970s to 2018, when the US surpassed both Saudi Arabia and Russia.

But Saudi Arabia remains under the US thumb:

what Saudi Arabia does not save in dollarized assets with its oil-export earnings is spent on buying hundreds of billion of dollars of U.S. arms exports. This locks them into dependence on U.S. supply [of] replacement parts and repairs, and enables the United States to turn off Saudi military hardware at any point of time, in the event that the Saudis may try to act independently of U.S. foreign policy.

So maintaining the dollar as the world’s reserve currency became a mainstay of U.S. military spending. Foreign countries do not have to pay the Pentagon directly for this spending. They simply finance the U.S. Treasury and U.S. banking system.

However, any move away from this status quo tends to be met with paranoia and intervention from the US:

Fear of this development was a major reason why the United States moved against Libya, whose foreign reserves were held in gold, not dollars, and which was urging other African countries to follow suit in order to free themselves from “Dollar Diplomacy.” Hillary and Obama invaded, grabbed their gold supplies (we still have no idea who ended up with these billions of dollars’ worth of gold) and destroyed Libya’s government, its public education system, its public infrastructure …

But the role of oil-producing states goes beyond merely churning dollars and US debt to keep the dollar afloat. These countries also provide the foot soldiers for many US interventions in terms of terrorists and guerrilla fighters who can be used against US enemies.  Hudson declares:

The Vietnam War showed that modern democracies cannot field armies for any major military conflict, because this would require a draft of its citizens. That would lead any government attempting such a draft to be voted out of power. And without troops, it is not possible to invade a country to take it over.

The corollary of this perception is that democracies have only two choices when it comes to military strategy: They can only wage airpower, bombing opponents; or they can create a foreign legion, that is, hire mercenaries or back foreign governments that provide this military service.

That is, the US regime can certainly get away with lots of bombing operations and other low-manpower operations. But anything that might require conscription is a political nonstarter. Hudson notes that Saudi Arabia, with its particularly rabid and extreme strain of Islam is quite useful:

Here once again Saudi Arabia plays a critical role, through its control of Wahabi Sunnis turned into terrorist jihadis willing to sabotage, bomb, assassinate, blow up and otherwise fight any target designated as an enemy of “Islam,” the euphemism for Saudi Arabia acting as U.S. client state. (Religion really is not the key; I know of no ISIS or similar Wahabi attack on Israeli targets.) The United States needs the Saudis to supply or finance Wahabi crazies. So in addition to playing a key role in the U.S. balance of payments by recycling its oil-export earnings into U.S. stocks, bonds and other investments, Saudi Arabia provides manpower by supporting the Wahabi members of America’s foreign legion, ISIS and Al-Nusra/Al-Qaeda. Terrorism has become the “democratic” mode of today’s U.S. military policy.

Hudson also notes that the term “democracy,” when used in the context of foreign policy, has very little to do with what a normal person would regard as democracy. Rather,

From the U.S. vantage point, what is a “democracy”? In today’s Orwellian vocabulary, it means any country supporting U.S. foreign policy. … The antonym to “democracy” is “terrorist.” That simply means a nation willing to fight to become independent from U.S. neoliberal democracy.

And this leads us to Iran. Hudson explains:

America’s hatred of Iran starts with its attempt to control its own oil production, exports and earnings. It goes back to 1953, when Mossadegh was overthrown because he wanted domestic sovereignty over Anglo-Persian oil. The CIA-MI6 coup replaced him with the pliant Shah, who imposed a police state to prevent Iranian independence from U.S. policy. The only physical places free from the police were the mosques. That made the Islamic Republic the path of least resistance to overthrowing the Shah and re-asserting Iranian sovereignty.

Thus, we got the Islamic revolution of 1979 which has led to forty years of Iran refusing to play ball in the US dollar maintenance regime that is demanded of other oil-producing nations in the Middle East.

The US is unlikely to let up on this effort so long as Iran continues to refuse to take orders from DC on these matters. It’s true that the US can’t do much about China and Russia. But Iran — unlike North Korea, which wisely secured nuclear arms for itself — remains an easy target because of its lack of nuclear capability.

Loading...
"Not by might, nor by power, but by my spirit, saith the Lord of hosts." Zechariah 4:6
Read it..
BEFORE IT'S NEWS
SIGN UP FOR OUR NEWSLETTER
Today's Top Stories
China Launched an Invasion—Terrifying Development You Need To Pay Attention To Before It’s Too Late!
Baking Soda and Sea Salt the Best All Natural Remedy for Combating Radiation Exposure and Cancer (Video)
The Dollar Will Collapse Within Weeks! What Will Replace It? - Must See Video!
X22Report: Prepare for the Storm, it’s Time to Bring Down the Corrupt System, Ready! - Great Video!
Earth Formed Much Faster Than Previously Thought
Earliest Interbreeding Event Between Ancient Human Populations Discovered
Planet with 18 Hour Year on the Edge of Destruction, Shortest Orbital Period Ever Observed for a Hot Jupiter
Where Is The Greatest Risk To Our Mineral Resource Supplies?
How Newborn Stars Prepare for the Birth of Planets
Exclusive: Hospitals Discharge Unrecovered Coronavirus Patients; Hundreds of Thousands Flee Wuhan! - Must See Video!
Loading...
Featured
Anonymous: Most People Don't Even Realize What's Happening
Sarah Westall: Whistleblower Brutally Beaten, Coronavirus Explained From Chinese Healer, Hired Mercenaries
Mark Taylor: Q! Gloves Are Off, Fight Is On
Michigan college student posts picture of his new rifle, ends up charged with felony ‘making terroristic threats’
Children’s book celebrates homosexuality, gender fluidity for kids
Asians Far More Susceptible to Coronavirus than Other Races, More Likely to Die, Just Like SARS - REPORT
David Abel Exposed As Crisis Acting Freemason On Board Diamond Princess Cruise Ship
Another Disastrous Night for the Hapless Dems ~ Ep. 1185 ~ The Dan Bongino Show®
McDonald’s Self-Order Kiosks an Answer to Demand for $15 an Hour
Is Coronavirus a Biological Weapon?