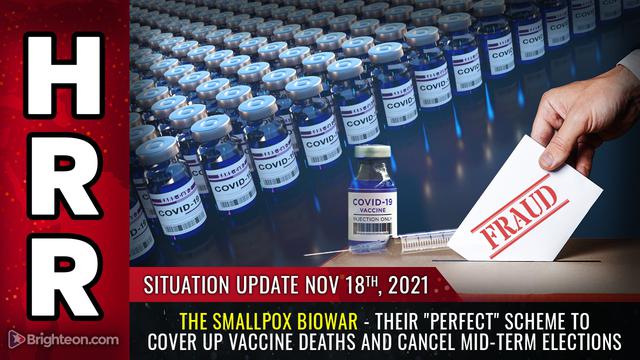 (Natural News) The first settlers of America from Europe did not “discover” new territory, it was already “occupied” by Natives. Interestingly enough, if you combine all indigenous peoples of America before the Europeans came over in 1492, there were over 60 million, while there were only about 80 million spread across Europe at the time.

Using secretive acts of genocide by spreading disease and violence, that number of indigenous Americans was reduced to 18 million within 60 years, or three generations later. By the 1850s, there were only about 6,000 Native Americans left alive. It’s no conspiracy theory, but fact supported by public record, that the early settlers spread small pox to the Native Americans, on purpose, knowing it could easily wipe them off the face of Earth.

Today, we see it all happening again, as the US government spreads Covid-19 on purpose, using illegal immigrants, and the end goal is exactly the same – wipe out two-thirds of the indigenous population, which happens to be US citizens. Surprised? It’s a genocide by virus repeat performance, but this time the vaccines are the pandemic and biological weapons of mass destruction, more so than the virus itself.

Several letters authored by officers of the British military in 1763 speak in detail about their plans to infect the Indians with a plague in order to eradicate them like “vermin.” The Europeans wanted to take over America, and they did it in the most insidious way. Today, the Marxists in Washington DC are teamed up with the Chinese Communist Party, wanting to wipe out at least 2/3rds of the legal populace of America, making way for mass immigration and a New World Order (communist style).

If you think Covid-19 is the new small pox, though, think again. Covid is only killing off the weak Americans, who are/were already battling cancer, diabetes, obesity, heart disease and chronic inflammation from processed food and lab-made pharmaceuticals. So now, the biological weapon of mass destruction is “hidden in the blankets” as over a hundred million Americans have become infected with blood clotting prions and toxic nanoparticles, thinking they received a “friendly gift” from the government, again. These clot shots weaken the immune system, setting up the vaccinated for future deadly infections.

Take a look at the excerpts from the British military officers where they planned to kill the natives using a deadly virus:

“I will try to inoculate the Indians by means of blankets that may fall in their hands, taking care however not to get the disease myself. As it is a pity to appose good men against them, I wish we could make use of the Spaniards’ method, and hunt them with English dogs, supported by Rangers and some light horse, who would, I think, effectively extirpate or remove that vermin.” — Col. Henry Bouquet, 13 July, 1763

“You will do well to try to inoculate the Indians by means of Blankets, as well as to try every other method that can serve to Extirpate this Exorable Race. I should be very glad your scheme for hunting them down by Dogs could take effect, but England is at too great a distance to think of that at present.” — Gen. Jeffery Amherst, 16 July 1763

Tune your truth news dial to Pandemic.news to stay informed of the engineered pitfalls of the Covid scamdemic. It doesn’t take a scientist or doctor to see that Covid vaccines, Remdesivir and ventilators are compounding the problems of the pandemic, creating a pandemic of their own.