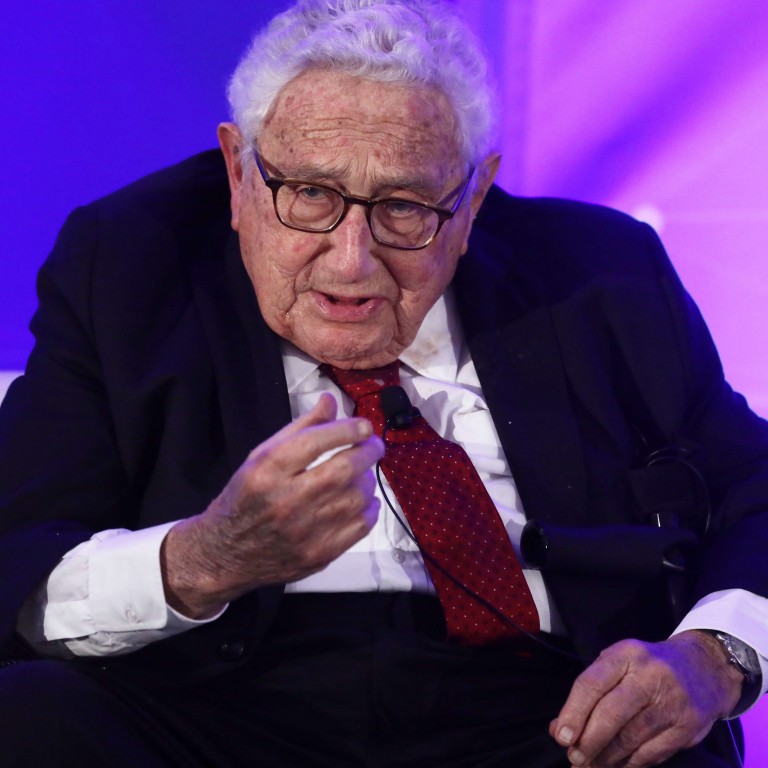 Via RT / The Burning Platform

Former US Secretary of State Henry Kissinger has told the Wall Street Journal that Washington has rejected traditional diplomacy, and in the absence of a great leader, has driven the world to the precipice of war over Ukraine and Taiwan.

Kissinger previously courted controversy for suggesting that Kiev abandon some of its territorial claims to end the conflict with Russia.

“We are at the edge of war with Russia and China on issues which we partly created, without any concept of how this is going to end or what it’s supposed to lead to,” Kissinger said in the interview, published on Saturday.

Kissinger, now 99 years old, elaborated on the West’s role in the Ukraine conflict in a recent book profiling prominent post-WWII leaders. He described Russia’s decision to send troops into the country in February as motivated by its own security, as having Ukraine join NATO would move the alliance’s weapons to within 300 miles (480km) of Moscow. Conversely, having Ukraine in its entirety fall under Russian influence would do little to “calm historic European fears of Russian domination.” 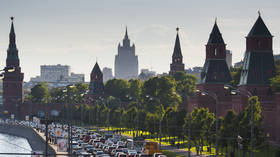 Moscow names condition for ‘normalizing’ relations with US

Diplomats in Kiev and Washington should have balanced these concerns, he wrote, describing the current conflict in Ukraine as “an outgrowth of a failed strategic dialogue.” Speaking to the Wall Street Journal a month after the book’s publication, Kissinger stood by his insistence that the West should have taken Russian President Vladimir Putin’s security demands seriously, and made it clear that Ukraine would not be accepted into NATO alliance.

In the runup to its military operation in Ukraine, Russia presented the US and NATO with written outlines of its security concerns, which were rejected by both receiving parties.

Kissinger, who in the late 1960s and early 1970s held extensive negotiations with Vietnamese communists even as the US military waged war against them, said that modern American leaders tend to view diplomacy as having “personal relationships with the adversary,” and in words paraphrased by the Wall Street Journal, “tend to view negotiations in missionary, rather than psychological terms, seeking to convert or condemn their interlocutors rather than to penetrate their thinking.”

Instead, Kissinger argued that the US should seek “equilibrium” between itself, Russia, and China.

This term refers to “a kind of balance of power, with an acceptance of the legitimacy of sometimes opposing values,” Kissinger explained. “Because if you believe that the final outcome of your effort has to be the imposition of your values, then I think equilibrium is not possible.” 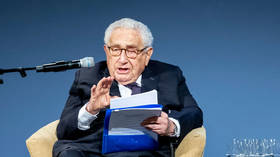 Under President Richard Nixon, Kissinger orchestrated the US’ diplomatic outreach to China in the 1970s, a move aimed at prying Beijing away from Moscow and shifting the balance of power in the world away from the communist East.

Under President Joe Biden, the US has watched as China and Russia deepened their trade and diplomatic ties. US policy on Taiwan – with Joe Biden publicly breaking with Washington’s Kissinger-era ambiguity on the island’s independence and House Speaker Nancy Pelosi enraging Beijing with a visit to Taipei earlier this month – has further damaged the US relationship with China and prompted a surge in military activity in the Taiwan Strait.

According to Kissinger, the US is no longer in a position to side with either Russia or China against the other. “All you can do is not to accelerate the tensions and to create options, and for that you have to have some purpose,” he said.

Kissinger is a prominent advocate of the realpolitik school of international relations, which puts the practical interests of nations ahead of ideological stances. His dispassionate view of foreign affairs has earned him enemies as well as praise, however.

Earlier this summer, Ukrainian President Vladimir Zelensky condemned Kissinger for suggesting that Kiev must accept a return to the “status quo ante” – relinquishing its territorial claims to Crimea and granting autonomy to the Donetsk and Lugansk People’s Republics – and seek a peace deal with Russia to prevent a third world war. Kissinger later clarified that these claims should only be temporarily shelved in order to negotiate an immediate ceasefire, but was nevertheless labeled an enemy of Ukraine by Kiev and accused of “spreading narratives of Russian-fascist propaganda and blackmail.”

Loading...
"Not by might, nor by power, but by my spirit, saith the Lord of hosts." Zechariah 4:6
BEFORE IT'S NEWS ON TELEGRAM
GET THE TELEGRAM APP - https://telegram.org/ JOIN OUR CHANNEL - https://t.me/BeforeitsNews
Read it..
BEFORE IT'S NEWS
SIGN UP FOR OUR NEWSLETTER
Today's Top Stories
What Happens Sept 24? Why Do Some Believe A Major Catastrophe Is About To Shock the World?
Benjamin Fulford 9/22 Mega Report: Queen Elizabeth Murdered Says Insider, Khazarian Mafia Secretly Negotiating Peace, China Preparing To Invade Taiwan, Russia Suggestion For World Peace Is Dissolve Federal Reserve, Pope Involved In Plan To Kill 90% Of World's Population
Charlie Ward: Special Intel Report - "The End of September" (Video)
Situation Update: WW3 Declared? Russia Prepares For War Against NATO & USA! Nuclear War Standoff Looming! Red Line Drawn! Exposing Gov Sponsored Child Trafficking! 500 Children Missing In System! - We The People News
New Benjamin Fulford: Big Weekly Geo-Political Intelligence Update Video! Sept 2022
X22 Report: Scavino Message Received! The Direction Is Clear! Justice Is Coming! - Must Video
New Charlie Ward: Trump the Genius with Melissa Redpill - Putin Kicking Out the Globalists - Awoke Celebrities
Derek Johnson Latest Update 9.22.22! - Must Video
Vaccine Demon Invasions Caught On Video?!! Do These People See An Invisible Demon Before They Die?? Demon Says Vaccine Opens Door For Demons!!
United States Military Preparing For Something HUGE!! - Patrick Humphrey Preparedness
Loading...
Featured
Covid Was The Test-Confirmed & This Is THE Biblical Tribulation God Warned Us About-Timeline Included /The Next Target
The US economy is on a long-term descent
Bombshell Interview With FBI Whistleblower Kyle Seraphin! - The Dan Bongino Show
Unhinged Liberal Who KILLED Republican Teenager FREED, GOP Is Doing NOTHING As Terrorist Walks Free
The US has become worse than Soviet Russia – with Russian immigrant Daniel Satchkov
How Safe Is It to Fly? Not Very, According to This Helicopter Pilot – Dr Tess Lawrie
Armed Smugglers Caught on Arizona Border Trail Camera Escorting Captured Men
The Dangerous Hypocrisy of the Woke
Worse than Monkeypox? Multiple Cases of Skin Diseases Following COVID-19 Vaccination Start Appearing in the Medical Journals
Mystery of The Great Seal - The Birth of The New World Order  (Official Trailer)
Loading...
Top Global
Ukraine perfect testing ground for new US weapons – official
Masters of Deceit: The Government’s Propaganda of Fear, Mind Control & Brain Warfare
Armed Smugglers Caught on Arizona Border Trail Camera Escorting Captured Men
Sarah Westall: One World Digital Currency & Servitude - The Plan Explained with Kent Lewiss (2of2) 9-22-2022
C-19 Injections Now Prohibited by Global Law !! (Video)
A Message to Those Who Still Don’t Get What’s Going On! (Video)
All Of A Sudden, There Is A Huge New Push To Establish A Palestinian State
The situation in the Ukrainian SMO on September 22 2022
This Is The End Game! - Tom Luongo - SGT Report
...And the Band Played On..! (ConVid-Injection) Booster in Operation! (Video)
Top Alternative
Lavrov UN speech; Macron; Prisoner Exchange; Referenda begin. Alex Christoforou – 23 September Update 1
Not a Single US State Is Requiring Kids to Get a Covid Vaccine to Attend Public School. Why?
Trump's [7] Day Countdown: My Fellow Americans, The Storm is Upon Us! Nothing Can Stop What's Coming!
TDS: We Can Save The Nation From Trump By Rewriting The Constitution
Ukraine perfect testing ground for new US weapons – official
Through My Bible Yr 02 – September 23
...And the Band Played On..! (ConVid-Injection) Booster in Operation! (Video)
Question: If Juan O' Savin Is Not JFK Jr - Why Would He Refer to Joe Kennedy as “Grandpa?" (Video)
The situation in the Ukrainian SMO on September 22 2022
Rosh Hashanah / Feast of Trumpets 24th 2022