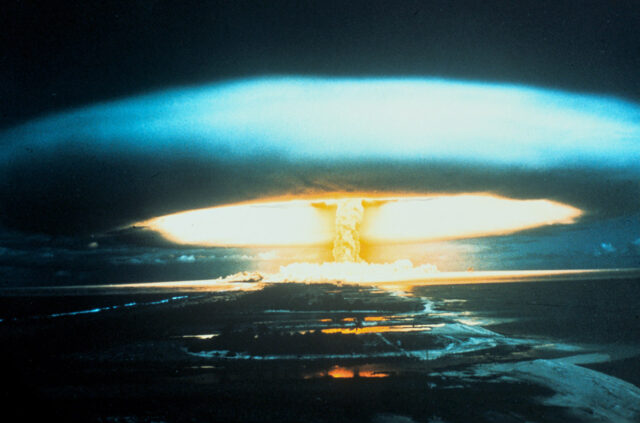 Russia’s recent “partial mobilization” will call in 300,000 military reservists to be trained and deployed in the ongoing conflict with Ukraine in the coming months. It is now common knowledge – although Western countries continue to deny the obvious – that Ukraine’s military offensives are led by NATO forces, using NATO satellites, training and equipment. In essence, Russia is already fighting NATO in a continental war, and Russia realizes that Western countries will settle for nothing less than the complete destruction of Russia as a sovereign nation, Mike Adams writes .

Four republics in the Donbass region are reportedly voting on a referendum to officially become part of Russia. The Ukrainian government is threatening prison terms of up to five years for anyone who even votes in these elections, proving that Ukraine has no interest whatsoever in democracy or people’s self-determination. Yet these elections are taking place, and it is very likely that these republics will join Russia, making them part of Russian territory.

Once that is established, Russia will consider any attack on those newly acceded regions (which, of course, were once part of the Soviet Union, and where most of the people are ethnic Russians who speak Russian and who actually want to belong to Russia) as an attack on Russia itself. Such attacks can provoke a defensive response from Russia, and that defensive response could include any type of weapon available for Russia’s national defense, including nuclear weapons, Putin recently reminded the world.

Western media, now lying even more vehemently than Pravda ever did, claim that this is Putin threatening the first use of nuclear weapons. That’s a lie, of course, but it’s a handy lie used by the Western media to call for a Western preemptive nuclear attack on Russia to stop “Russia’s aggression.”

This is a very dangerous development, because if Russia takes such threats seriously, classical game theory would require Putin to strike first, in order to prevent the expected preemptive strike from the West. So we are in a rapidly escalating feedback loop that could end in nuclear disaster, especially given that the Biden regime appears to be actively trying to start World War III before the midterm elections, allowing it to declare national warfare and may try to delay the ballot beating that Democrats are sure to get when the election takes place.

Worse still, while Putin appears to be acting rationally out of his own national self-interest, Western leaders behave like psychopaths completely disconnected from reason and reality. They don’t even recognize that their own economic sanctions against Russia have unleashed the catastrophic economic woes and energy crisis that Western Europe will soon face (with mass famine and industrial collapse soon to follow). The leaders of Germany, the UK and the US don’t seem to realize that provoking Russia into a nuclear confrontation will end horribly wrong for the West (and likely mean the end of Western civilization).

In classical game theory, analysts speak of “two scorpions in a pot”, each of which is capable of stinging the other to death, even if they are stung themselves. But the reality is that We the People are all trapped in that jar with a bunch of psychopathic scorpions who have powerful weapons but lack rationality, intelligence or ethical foundations to manage the use of those weapons.

It’s like we’re all wearing flammable clothes to a spoiled kid’s birthday party, and the parents just give him a flamethrower. What do you think will happen then? We all burn.

Translated into reality, we are already suffering the economic devastation of the west’s anti-Russian sanctions (currently known as “suicide sanctions”), and now Western media influencers are begging the Pentagon to authorize a first nuclear strike on Russia, a nation that 20-30 years ahead has more advanced anti-aircraft systems and hyper-glider ICBMs that can evade any defense system currently owned by NATO nations, including the US. Provoking Russia to a nuclear strike when it has the best anti-ICBM missile systems is like going into a firefight with an opponent who has the best ballistic shield in the world. It’s another suicidal wish, but it’s exactly what the western media (and governments) are begging for.

At this point, any sane person should prepare for a nuclear war, realizing that it is desperately being provoked by the US and NATO. Russia does not want nuclear war, and fortunately for humanity, Putin is a much more moderate and patient man than any Western leader, meaning he will not irrationally use nuclear weapons for political ends.