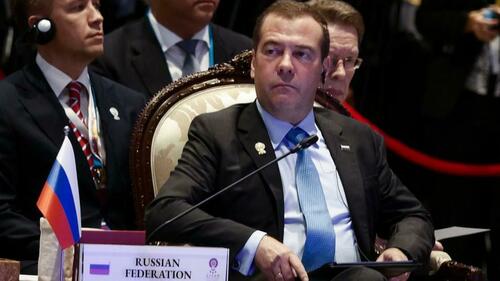 Once again Dmitry Medvedev, the deputy chairman of Russia’s Security Council, has served the role of issuing more severe ‘read between the lines’ warnings and threats fresh off President Vladimir Putin’s Wednesday speech announcing partial mobilization of national forces and which confirmed referendums of occupied portions of Ukraine to join the Russian Federation.

Putin’s most alarming line came when he said, “If the territorial integrity of our country is threatened, we will certainly use all the means at our disposal to protect Russia and our people,” following with “It’s not a bluff.” He had also stressed Moscow is ready to use “all available” means to protect its “territorial integrity”.

Medvedev has taken the president’s words further in Thursday statements, stressing that regarding Russian-seized territory and the move to vote in several areas – including the LPR, DPR, Kherson and Zaporozhye regions - “there is no going back” and that even a ‘nuclear option’ could be on the table.

“The Donbas [Donetsk and Luhansk] republics and other territories will be accepted into Russia,” he posted to Telegram. That’s when the former president and top national security official doubled down on Putin’s nuclear warning, stating:

Russia has announced that not only mobilization capabilities, but also any Russian weapons, including strategic nuclear weapons and weapons based on new principles, could be used for such protection.

However, it remains that Russian forces do not yet control 100% of any of the four main territories where annexation votes are to be held – with some referendums set for early as this weekend according to prior reports.

To review of the past 48 hours of Kremlin decision-making which is poised to escalate this war even further, here is the logical course of what just got enacted in the call-up of some 300,000 reservists:

“Territorial integrity” is of course tricky as Russia is currently planning to absorb 4 Ukrainian regions, none of which is even fully controlled by its armed forces. Would this mean that Ukraine would be threatened with nuclear weapons to hand them to Russia? 9/13

Putin’s emphasis of this is “not a bluff” notwithstanding, some analysts say this is all about posturing in order to scare NATO away from escalation…

“I think it signals that he wants people to think he would risk nuclear war,” Phillips O’Brien, a professor of strategic studies at the University of St. Andrews in Scotland. “I don’t think it means he is any more likely to do it than he was yesterday.”

“If he says that any attack on soil that he calls Russia is going to be a nuclear tripwire, Ukraine’s already broken that in Crimea,” O’Brien added in comments given to NBC. Yet Washington says it is taking this nuclear rhetoric seriously.

As for the White House, President Biden in his Wednesday UN General Assembly speech in New York called out Putin’s “overt, reckless and irresponsible” nuclear threats, warning that such wars should “never be fought” and that Russia’s actions should make everyone’s “blood run cold”. He renewed his warning of “a nuclear war cannot be won” – saying the US does “not seek a cold war”.