Advocate of occultist Julius Evola was chosen as an examiner to approve new diplomats from Brazil
By Julio Severo
Now, a Brazilian who wants to be a diplomat must be examined and approved by an enthusiast of the Italian philosopher Julius Evola, who was the guru of the Italian fascist dictator Benito Mussolini. 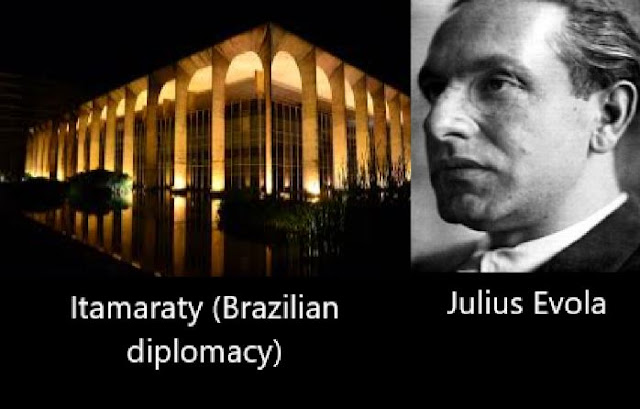 The news came out in the Brazilian magazine Época, in a story entitled “Ernesto Araújo appoints a specialist in fascist philosopher to the Itamaraty examining board,” which said:

César Alberto Ranquetat Júnior was appointed by the chancellor to the post on Friday 19 [2020].
Ranquetat is considered the greatest specialist in Evola in Brazil.
In 2014, Ranquetat said at a conference in honor of Evola, in Argentina:
“I was delighted with the Evola thinking, mainly because of Evola’s courage and audacity. He is an author of unparalleled consistency, straightforwardness and clarity,” and he added:
“The idea of holding Evola meetings in Brazil, apart from modesty, came from me. My idea was for Evola’s thinking to expand, to spread more significantly in political sectors, the cultural world, etc.”
In a note, Ranquetat denied that he was chosen because he liked Evola. He said he was chosen for his credentials as a professional researcher.
However, he did not deny having made the complimenting statements on Evola, including that he had the idea of holding Evola meetings in Brazil and helping to expand Evola’s ideas in Brazil. And he couldn’t deny it. A brief survey I did on Google reveals Ranquetat’s involvement with Evola’s name and events.
To think that Evola’s devotion in Ranquetat’s ideas will not interfere when it comes to examining and approving new diplomats in Brazil is an illusion.
And to think that Ranquetat is a pioneer bringing Julius Evola into Itamaraty, which is Brazilian diplomacy, is another illusion.
Brazil’s Minister of Foreign Affairs, Ernesto Araújo, has already praised, in an article published in a diplomatic magazine, Julius Evola, Steve Bannon and Olavo de Carvalho — all of whom are members of the Traditionalist School, an occult cult that especially houses esoteric fascists.
The vast majority of Brazilians do not know Evola. But it is not difficult to understand him: There are major parallels between Evola and Brazilian Olavo de Carvalho, and both are publicly admired by Ernesto Araújo.
It may be pure coincidence that Ranquetat, an admirer of Evola, was chosen by Araújo, another admirer of Evola.
As an evangelical writer, I am extremely concerned. Brazilian evangelicals elected President Jair Bolsonaro’s administration not to become a platform for Evola, Bannon, Carvalho and other occult members of the Traditionalist School. They elected the Bolsonaro administration to oppose the abortion, socialism and homosexuality agenda.
It was never the will of evangelicals to remove the left to put, in its place, occult admirers of Evola.
Evola was nothing more than an Italian Steve Bannon or Italian Olavo de Carvalho.
What to do with the members of the Traditionalist School? The best example comes from President Donald Trump. For some time, Trump was duped by a member of the Traditionalist School — Steve Bannon. But after Trump saw, and declared, that Bannon was nothing more than a traitor and opportunist, Bannon was expelled from the White House. You can read here the humiliating letter that Trump addressed to Bannon.
The Bolsonaro administration urgently needs to imitate Trump and expel all members of the Traditionalist School.
Portuguese version of this article: Defensor do ocultista Julius Evola foi escolhido como examinador para aprovar novos diplomatas do Brasil
Source: Last Days Watchman
Recommended Reading:
Olavo de Carvalho and Julius Evola, parallels of two prominent right-wing occultists of the Traditionalist School
Beware the Traditionalist School, the Esoteric Sect that Uses Anti-Marxism to Promote Religious Syncretism and the Personality Cult of Its Leaders
Supported by Evangelicals Angry with the Left and Its Anti-Family Attacks, Jair Bolsonaro Is Elected Brazilian President
Brazilian Presidential Election: Fernando Haddad Acknowledges that the Biggest Responsible for His Defeat at the Polls Was “Evangelical Phenomenon”
Julio Severo seeks to move Christians to daily prayer with ‘Prophetic Prayers’
Steve Bannon’s Occult Movement, Brazil and Conservative Evangelicals
How the Powerful Union of Trump with Evangelicals Saved the U.S. from Steve Bannon and His Occult Plan of a “Traditionalist” Government
Guenonian Influence in Brazil’s Bolsonaro Administration
Brazilian Foreign Policy: From Marxism to Occultism
To follow Julio Severo in Twitter and Facebook: Twitter: http://twitter.com/julioseverous Facebook: http://www.facebook.com/pages/Blog-Julio-Severo/185623904807430