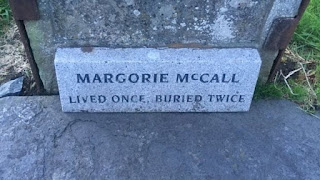 Just in time for Halloween we have a sweet treat for readers. A guest author with a scary story about graveyard shenanigans and Irish ghosts.

Come here to me and I’ll tell you the story of Mrs. Margorie McCall.

In 1695, Margorie got a bad dose of it. Sadly she died and was buried in the Shankhill cemetery.

Not long after, a couple of wankers showed up in search of some treasure. They dug up Margorie and discovered a valuable ring on her finger. Unable to slide it off, they decided to remove her finger entirely. As they cut into her, Margorie woke up. Well Jesus, Mary and Joseph! Was it a miraculous resurrection? The hooligans didn’t stick around to find out.

Finding herself awake in a burial plot, Margorie dusted herself off and legged it home.

Soon enough, her family heard a knock on the door. Her husband said, “If your mam wasn’t dead, I could swear that was her knock.” Upon opening the door and finding his newly undead wife, his hair went white with shock.

It was a grand reunion though. Given a second chance at life, Margorie snogged her fella and went on to have another wee one before her final, actual death and burial.

A search on this story reveals several variations in the retelling. And none have the kind of documentation that would hold up to a historian’s scrutiny. Additionally, would you believe anyone even remotely alive would remain unconscious during an Irish wake? And making another baby with that eejit? Not bloody likely.

Interestingly though, Margorie’s story isn’t all that special. The lady and the ring is an archetype, common in much of European folklore. Furthermore, stories about being buried alive can be found across the centuries and in many cultures. So while Margorie almost certainly only lived and died once, you can be sure the Irish will be slagging ya on this ghost story for donkey’s years.

A Sideways Look At What Really Happened On This Day In History.