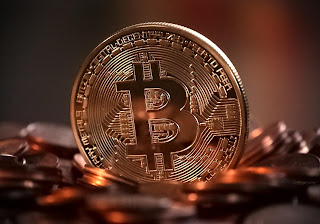 The year was 2010. A man in Florida, USA ordered two pizzas from Papa John’s Pizza.

It’s hard to say why anyone would do such a thing. But this history story isn’t about cardboard pizza, it’s about what someone is willing to pay to get it. All I can say is they must be pretty hungry and have no other options. There’s no accounting for taste, or lack thereof, I guess.

The year 2010 seems like a long time ago to many folks. But then again, anything that happened before 2020 seems like ancient history now.

The two participants in this pizza transaction decided that for this order they didn’t want to use US dollars to settle the trade. Who can blame them? Because…

Some people at the US treasury have a special printing press and they just plug it in whenever they need some money to buy stuff, like votes for instance. So the value of the dollar keeps falling because they print so many of them. The value has been falling pretty steadily since 1913. That’s when the government invented the Federal Reserve out of the same thin air as the money is printed. The idea was to stabilize the value of the money, they said. Since then the value has declined by about 95%, so I have a suspicion that stabilization wasn’t the actual purpose. But then, cynicism about such notions may be forgiven.

Anyway, the pizza transactors decided to use a different kind of money. They agreed to use some money called Bit Coin. It may have seemed an odd choice to some. But it made sense to them and it didn’t seem to be anyone else’s business. (Some government types may disagree about that to this very day.)

Between the two of them they had to agree to the value of the Bit Coin so a fair trade could be made. They settled on 10 thousand bit coins for the two pizzas, which would normally sell for about $30 US dollars in those days. It’s cheaper nowadays due to the lack of success by the FED at defending the dollar, but again, I digress. Unlike the US dollar some money appreciates in value from time to time. Bit Coin is one of those.

It’s not known if the Papa John’s franchise owner still has the bitcoin from that transaction. But if he does I’m guessing he isn’t flinging pies into thin air anymore.

To celebrate this story, get on the phone and order a couple of pizzas but be sure to ask if there is a coupon you can use to lower the price. Or maybe a discount for paying with Bit Coin?

PS.  It has been claimed that anyone who has ever bought Bit Coins on any day, with the exception of 4 days in 2017, since it was invented 10 years ago, and still has them, has a paper profit. Well, a crypto profit anyway.

A Sideways Look At What Really Happened On This Day In History.