Last week, Southeastern Baptist Theological Seminary research professor, Karen Swallow Prior, made a socio-cultural analogy between the systemic social consequences of the 1960s sexual revolution in the United States and the systemic racism in the United States we allegedly observe today according to Critical Race theorists. As I showed in my reply, Prior’s analogy simply collapses in on itself making it far more difficult to accept her claim of systemic racism (via CRT) rather than easier.

This week, a reputable Baptist historian makes yet another analogy from almost the same time periods as did Prior to illustrate, in his mind at least, how voter suppression during the early 1960s (just prior to the passing of the 1965 Civil Rights Act) is very similar to the alleged voter suppression in 2021.

First, Leonard claims that “some new laws that limit voter access are hauntingly parallel to 60-year-old, blighted Jim Crow mandates.” As proof, Leonard describes a 1963 incident reportedly from Alabama that not only suppressed Blacks from registering to vote through threats and intimidation from local law enforcement but also carrying out the threats by standing by while Blacks were beaten for offering water to those standing in the long lines.

No reason exists to question whether or not the incident took place just like Leonard claims. Given the time-period and the turmoil in our country at the time, it ‘s entirely sad but fully reasonable to assume it did. And it never fails to emotionally move us to think how undeniably wrong and despicable those times were in our country.

Hence, while granting one cannot morally quibble concerning the racial wrongness of the Alabama incident in 1963, how does it follow that new 2021 laws pertaining to “voter access” and/or “voter suppression” are, in Leonard’s thinking, “hauntingly parallel”?

Leonard’s answer specifically is an example from my home state of Georgia claiming “Georgia lawmakers apparently followed precedent set by law enforcement officers” in Alabama in 1963 when they passed Georgia Law (SB 202). Leonard quotes the law:

“No person shall solicit votes in any manner or by any means or method, nor shall any person distribute or display any campaign material, nor shall any person give, offer to give, or participate in the giving of any money or gifts, including, but not limited to, food and drink, to an elector …”

Leonard apparently thinks the above quote from Georgia’s new law is so clearly similar to 1963 Jim Crow, it needs no explanation, and he offers none. He just moves on to “other elements of the law” which will “assure lengthened lines at polling places, especially in neighborhoods peopled by citizens of color.” But he never gets around to naming any of those mysterious new elements in Georgia’s voting laws. Instead he categorically concludes that while Georgia’s law failed to express the “militant language” of Alabama, Georgia nonetheless “retains a similar suppressive voting methodology” of Jim Crow.

In response, it seems absurd on its face to compare an horrific Jim Crow era incident that included unlawful public beatings of Blacks allegedly approved by local law enforcement to the Georgia state legislature following due process in amending Georgia state law. More concerning, however, is an explicit distortion of the amended portion of Georgia law Leonard shamefully cites to draw his supposed similarity to Jim Crow. While the quote above is correct so far as it goes, Leonard completely ignores the quote’s necessary context. Below is a screen capture of the amended Georgia voting law SB 202. (The underlined portions represent the new wording.) 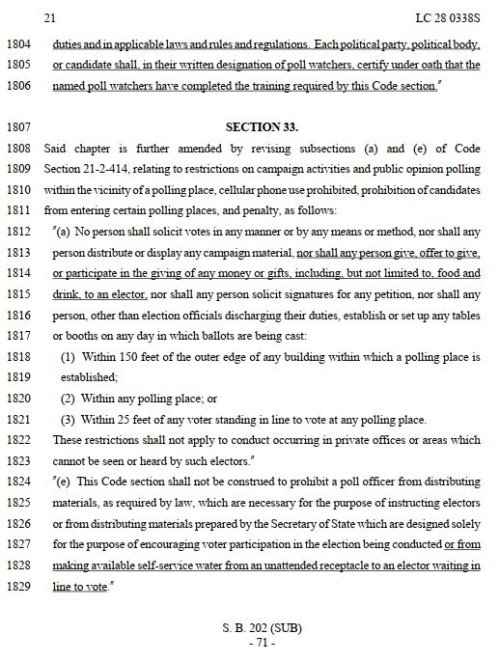 As any fair reading reveals, the Georgia law in question comes from Georgia’s General Provision section dealing with electioneering prohibitions. Electioneering laws are found in all 50 states including DC though it’s up to each individual state as to the boundaries of the restrictions. Restrictions prohibit political campaigning while voters are standing in line to vote. Some states specifically prohibit wearing caps, T-shirts, Sweatshirts, etc. that have particular candidates on them. Other states prohibit ink pens, small campaign buttons, indeed any and/or all paraphernalia that promotes one candidate or party over another. Usually there are measured boundaries into which one may not come with any of the above.

The specific addition Georgia included (underlined above) prohibits any person from giving gifts or money to waiting voters presumably since it may be construed as favoring a particular candidate or party. Included in the prohibition is “food and drink.” Georgia party Democrats criticized the law because it was supposedly a danger to voter health and consequently a deterrent to voter participation (voter suppression) to expect people to stand in long lines deprived of water, a claim even cited by the President of the United States as reminiscent of Jim Crow (i.e. Jim Crow on steroids“). Yet, even within the law itself, it specifically denied that “This Code section shall not be construed to prohibit a poll officer . . . from making available self-service water from an unattended receptacle to an elector waiting in line to vote” (see underlined portion in “(e)” above). Nor, of course, would it deny a voter from bringing his or her own water and snacks (if necessary) while standing in line.

What is more, Georgia lawmakers did not pull this rabbit out of a Jim Crow hat as indicated by Leonard. At least two other states have almost identical wording in their electioneering prohibitions. Montana law states, “Candidates, their family, and their campaign workers/volunteers cannot distribute alcohol, tobacco, food, drink, or anything of value.” The state of New York similarly prohibits “Providing or purchasing meat, drink, tobacco, refreshment or other provision with a retail value of more than one dollar is prohibited in polling places (see statue for exceptions).”

Hence, for Leonard to incredulously cite the new Georgia law as evidence of voter suppression similar to the Jim Crow era is embarrassing at best. He either did not read the law, or he took a Democratic political talking point at face value. Either way he remains responsible for perpetuating a distorted falsehood about Georgia. He also demeans his own profession as a reputable historian. One could rightly ask, Is this the level of reading and interpretation Bill Leonard has followed in handling primary sources as an academic historian? Or, more seriously, has Leonard allowed his personal politics favor an obviously irresponsible reading of a primary document?

Leonard offers two more reasons to conclude voter suppression in 2021 looks like voter suppression in 1961 neither of which is any more helpful to his strained analogy. First, comparing the mob violence that left Blacks beaten and bleeding in the 196os riots, Leonard quotes Department of Homeland Security spokeswoman, Sarah Peck–“domestic violent extremism poses the most lethal, persistent terrorism-related threat to our homeland today”–followed with the January 6th, 2021 breach of the U. S. Capital as the definitive example.

While it remains deplorable, concerning, and indefensible what happened at the U.S. Capital January 6th, how it can be spun to look like the 1960s is beyond reason. No Blacks beaten nor left bleeding in the street. No guns. No weapons. The lone but lamentable fatality that we know of was an unarmed woman shot dead by Capital police (presumably) for criminal trespassing. Nothing looks at all similar between the 1960s riots and the Capital’s breach. A much more favorable similarity could be drawn, however, from the rioting, burning, looting, beating, and killing that took place across several states beginning in early summer of 2020. But those examples would hardly fit the narrative Leonard seems to construct.

MARCH details the years of struggle for justice and equal rights in a society seemingly incapable of escaping the legacy of slavery and segregation. Yet those horrendous and heroic stories may become unavailable to school children in many regions in the land of the free and the home of the censored classroom.

Leonard then asks, “Will his memoir of hard-won civil rights, and others like it, be available for instruction in the nation’s schools?” followed by alluding to laws by Texas, Idaho, Montana, and others that have passed laws prohibiting Critical Race Theory in the classroom (Note: Leonard does not specifically mention CRT; however unless he implies it, the reader is lost as to what he’s referring). Frankly, this particular similarity to the 1960s riots makes hardly any sense, and because his analogy has already collapsed under the sheer weight of former two reasons he cites, no benefit exists in commenting further.

In closing, Bill Leonard is founding dean and the James and Marilyn Dunn professor of Baptist studies and church history emeritus at Wake Forest University School of Divinity in Winston-Salem, N.C. An author and/or editor of over two dozen books not counting untold essays in popular magazines and articles in peer-reviewed journals, I’ve found value from many of his treatises especially on Baptist History.

But I have to be honest. Leonard’s piece hardly rises to the level of an accomplished scholar and influential Baptist historian he’s become known to be. Rather it’s more like either a jaded political pundit on one side or a first-year college student paper on the other. While the political hack deserves no accolades whatsoever for his or her disregard for stated facts, I’m inclined to give a first-year student a merciful benefit of doubt so far as sincerity is concerned.