From the perspective of a pole shift researcher like myself, the Bible seems full of references to pole shift catastrophes. From the opening lines of Genesis, in which our current new world is created anew over the wreck and ruin of a previous world in less than a week – to the new heavens and new earth described in Revelation, there are dozens of descriptions of what we can expect during and after a catastrophic pole shift in which the entire surface of the planet moves in one solid shell over the molten core below, wreaking havoc as continents move to new latitudes and altitudes, and the oceans slosh out of their basins.

Isaiah 24:1 “Behold, the Lord lays the earth waste, devastates it, distorts its surface and scatters its inhabitants.”

Job 9:5-6 “It is God who removes the mountains, they know not how, When He overturns them in His anger; Who shakes the earth out of its place, And its pillars tremble.”

Psalms 46:2 “though the earth should change and though the mountains slip into the heart of the sea.”

Hebrews 12:26-27 “Yet once more I will shake not only the earth, but also the heaven. This expression, “Yet once more,” denotes the removing of those things which can be shaken.”

Isaiah 22:25 “In that day,” declares the Lord of hosts, “the peg driven in a firm place will give way; it will even break off and fall, and the load hanging on it will be cut off, for the Lord has spoken.”

Revelation 16:18-20 “there was a great earthquake, such as there had not been since man came to be upon the earth, so great an earthquake was it, and so mighty… And the cities of the nations fell… and every island fled away, and the mountains were not found.”

The following quotes are non-canonical; they are from books that did not make it into the Bible most Protestant Christians know today:

2 Esdras 2:4-8 tells us “The sun will suddenly start shining at night…. the movement of the stars will be changed.”

Book of Enoch, Noah 65:1 “And in those days, Noah saw the earth had tilted and that it’s destruction was near.”

Despite these and many other pole shift references in the modern Bible, many Christians cannot accept a cycle of periodic pole shift catastrophes that occur every 12-13,000 years. They cannot accept that a pole shift might be God’s natural method of wrath dished out to destroy human civlization multiple times. They cite the “Rainbow Covenant” and the common interpretation that another Great Flood event can NOT happen again. This is a very understandable interpretation, based on the modern English translation of Genesis 9:13-15 “I have set My rainbow in the cloud, and it shall serve as a sign of a covenant between Me and the earth.  It shall come about, when I make a cloud appear over the earth, that the rainbow will be seen in the cloud, and I will remember My covenant, which is between Me and you and every living creature of all flesh; and never again shall the water become a flood to destroy all flesh.” Some have argued that this is conditional upon God making a cloud appear over the earth first and that such a flood could come suddenly (without the global cloud and rainbow.) Another argument suggests that the original phrase meant the heavenly bow of Sagittarius, the archer constellation, and not a rainbow at all. Some say God makes covenants but only for a certain number of years or generations. And most simply read the text above and see “never again” which has made it difficult to convince many Christians of this periodic cycle of destruction by pole shift, or that the geophysical evidence suggests the next pole shift catastrophe is due again in the first half of the 21st century.

The Vatican may know something the rest of us are not privy to. 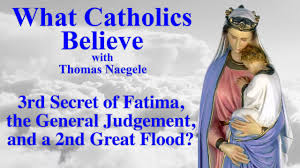 But Pope John Paul II had some very interesting comments on the prophetic visions that occurred in Fatima, Portugal in 1917 that seem very relevant to this. Commenting on the Third Secret (the girls say the Virgin Mary told them details of three secrets of future events, including the world wars and the rise of communism and the most horrible third secret which the Vatican has never released in full. In 1981, responding to a request to divulge the Third Secret of Fatima, Pope John Paul II said: “It should be sufficient for all Christians to know this: if there is a message in which it is written that the oceans will flood whole areas of the earth, and that from one moment to the next millions of people will perish, truly the publication of such a message is no longer something to be so much desired.”

And now in 2021, Pope Francis warns that “mankind faces a second Flood.”

“The wrath of God seeks to bring justice and to ‘cleanse.’ The Flood is the result of God’s wrath, according to the Bible,” he said. In commentary published March 2, the Pope suggested we might have another great flood soon, and that it is a viable natural method of God’s future application of wrath: “A great flood, perhaps due to a rise in temperature and the melting of glaciers: that is what will happen if we continue on the same path.” Pope Francis clearly and repeatedly suggests that another Great Flood is “what will happen” if our collective behavior invokes God’s wrath. (See: Pope Francis: World could face a new ‘great flood’ for more details on his recent interview.) Some comments online invoke the rainbow covenant in Genesis and say “The Pope might profit from a Bible study.” I suggest instead that the popes have information that is not readily available to the average know-it-all posting on Twitter.

If you want some good information on pole shift evidence, consider reading this book: