In March 2022, the United States imported far more goods than it exported, breaking its previoius record for its monthly trade deficit by a wide margin. We thought the occasion of the new record provided an interesting data visualization opportunity, so let’s start with the overall summary: 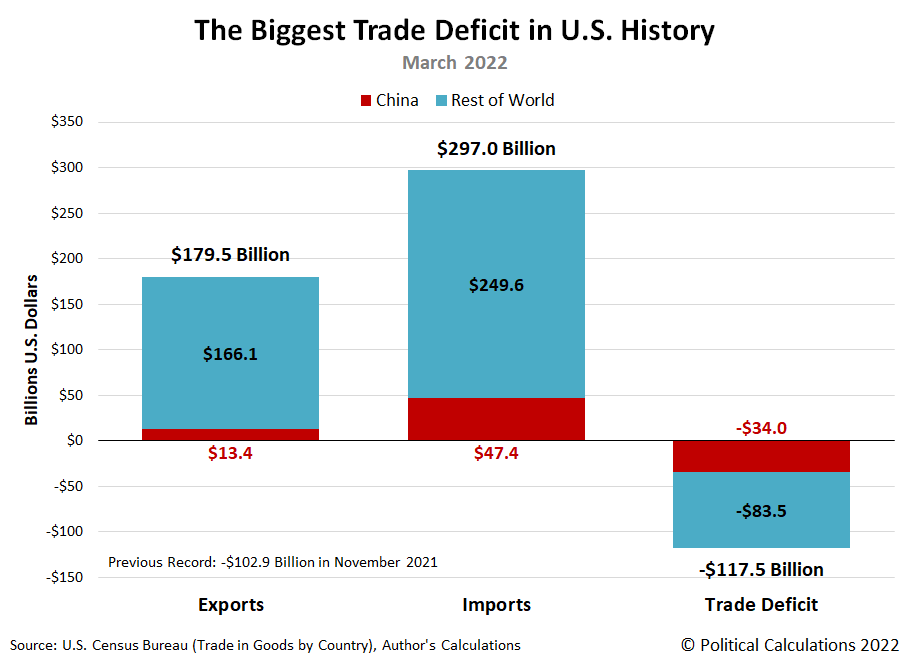 We decided to dig deeper into the U.S. Census Bureau’s trade data to see what it was that added the most to the U.S.’ record high trade deficit in March 2022. Those results are presented in the following interactive chart, for which you may need to click through to our site to get the big picture. Hover your cursor over the dots in the chart to get the related surplus (+) or deficit (-) in millions of U.S. dollars.

The biggest portion of the U.S.’ record March 2022 trade deficit was in the category for electric machinery. The second largest portion was for heavy mechanical machinery. (Note: nuclear reactors are included in the title for the official category, but this particular class of goods was a very small contributor to the U.S.’ trade deficit in March 2022!) The third largest category covers vehicles, which is mostly accounted for by imports of foreign-made automobiles and trucks. The large number of imports recorded during the month may be attributable to progress finally being made in unloading the backlog of large container ships that queued up in large numbers outside U.S. seaports during 2021.