America has gone emo. I think it’s a generation thing – every generation wants a big fight: 1914, 1939, the Sixties, the Fall of Soviet Communism – I’d have said every 25 years or so, except that Western women are having their babies later now so instead of c. 2014 it was a few years later this time.

Not just America, of course. The PC madness has taken hold of our educational institutions here in the UK, from primary school right up to Oxford University; liberal thinkers are being cancelled (the revolution eats its children), zealots are foisting Nuspeak on us so that Bad Things cannot be thought, and so on.
But emo it is. The Age of Reason is passing, and with it the rational political institutions that kept quarrelsome factions in some sort of balance. The common currency of our time is the scream.
Here, for example, is an image posted on Facebook by a highly intelligent and educated friend across the Big Water: 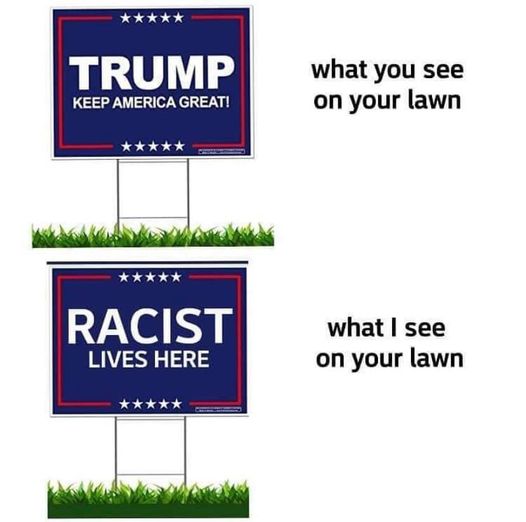 The Presidential election (and the one in 2016) has become a choice between God and the Devil, and any dissenters are to be threatened into silence in the way that the girls in Arthur Miller’s ‘The Crucible’ manage it, ‘seeing’ the demons in the courtroom itself: https://www.coursehero.com/file/p4ofc5i/Mary-Warren-Lord-save-me-Susanna-Walcott-I-freeze-I-freeze-Abigail-shivering/
Funny, though, that some black people see no difficulty in supporting the Republicans, at least the Republicans as headed by that man of many sins Donald Trump: Thomas Sowell; Kanye West; Candace Owens, here most effectively rebutting attempts by old white men to misrepresent her - https://www.facebook.com/watchparty/195577945043970
Also funny that Hillary Clinton should have said recently that Republicans themselves don’t want Trump:
“Most Republicans are going to want to close the page,” Clinton says. “They want to see him gone as much as we do, but they can’t say it publicly.”
- https://www.axios.com/hillary-clinton-kara-swisher-trump-01e2a357-1714-4369-947e-595bb9f29305.html
Now I don’t know the lady personally, but I doubt that Mrs Clinton knows many ordinary Republicans personally either. I think her remark refers to Establishment Republicans, the types she’ll have met, and I think I know why she said that: they’re in the same game as the Democrats – self-nterest and political survival. The difference is that the pseudo-Left throws scraps under the table to their supporters but never lets them sit on the bench with them; whereas the Right throws steaks at the faces of their supporters so they don’t get eaten themselves.
And in came Trump the Disruptor, just when it had begun to dawn on the workers that their customary choice was between an enemy and a frenemy. For the choice is between two systems, only one of whch supports both mainstream political parties.
The choice is between globalisation and national self-interest. The former is not sustainable for the West – the late Sir James Goldsmith (a billionaire entrepreneur) warned about this a quarter century ago, at the time of the GATT talks in 1994 https://www.youtube.com/watch?v=4PQrz8F0dBI , and again in 1996 https://www.youtube.com/watch?v=RowLyW5X52A .
For a time the prosperity of ordinary people was kept going because even if real wages were no longer rising, goodies imported from China and other Third World countries lowered prices so e.g. it was still possible to stuff children’s bedrooms with Christmas gewgaws from Toys “R” Us; but personal debts rose, unemployment rose, government spending on the Welfare State (and its US equivalent) rose.
Trump’s catchphrase ‘Make America Great Again’ grates with some who cringe at the thought of nationalistic economic imperialism; but more honestly it should be something like ‘Prevent America Becoming Destitute’. I attempted to graph the way the system works, eight years ago, and some on the Right didn’t like it, but I think it’s essentially correct: America’s rich and powerful jumped at the opportunity to arbitrage massive differences between the developed world and the developing world in the exchange-rate-adjusted value of land, labour and nonfinancial capital; actually it was a robbery of their own people. 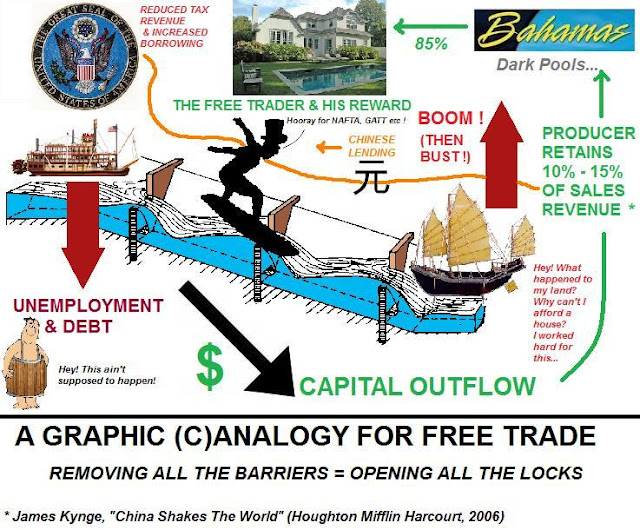 Graphic reposted from 2012 - https://theylaughedatnoah.blogspot.com/2012/06/how-system-works.html
Lately the elite themselves have begun to wonder if they can survive the smashup of the society in which they live, hence their purchase of boltholes in e.g. New Zealand.
Is Trump a liar, cheat, swindler, sexist adulterer etc? Yes; though as people are learning what’s on Hunter Biden’s laptop some are wondering whether his crazy behaviour is not symptomatic of something that went seriously wrong in his childhood. In any case, close examination of Biden Senior is beginning to characterise him as a grifter slowly going gaga.
Some of the American Right seem to me like those heartless, money-mad eighteenth-century English grandees who claimed compensation for drowned slaves as lost cargo, on their maritime insurance; but the more vocal element of the Left is shrieking about history and trying to rewrite it, rather than improving the lot of the underprivileged today; and as I say, the party that claims to represent the interests of the ‘minorities’ has a stronger interest in the latter remaining in a semi-wretched condition so that they will go on voting for benefits rather than a better life. Similarly in the UK, I’ve wondered whether, if it could, the British Labour Party would wave a wand to transform the lives of the poor and so make their political ‘pals’ redundant https://theylaughedatnoah.blogspot.com/2017/10/the-wand-of-collusion.html .
This Presidential election is a hard, hard choice, and I think it’s significant that it’s focused on personalities rather than macroeconomic and foreign policy. I fear that a vote for Biden is a vote for Business As Usual, with little right-on scraps thrown under the table to screaming supporters; with Trump it’s whether the favours he grants to his Establishment crocodiles are outweighed by the systemic readjustments he appears to be engineering to prevent Joe Public wearing a barrel.