1. Dutch police attack people for hugging in a park

Lots more whacking and attacking here. Many on horseback. Did the BLM/ANTIFA get this kind of reaction? Even during lockdown?


4. Various flags line the National Mall grounds in advance of the innaugeration to replace all the people who won’t be there. The Wuhan Flu pandemic provides a nice cover for the embarrassment of how few people would have attended this event. Remember how the MSM lied about the attendance numbers of Trump’s inauguration?

5. Channel4 News joins the ranks of enemy propaganda as they accuse President Trump of destroying the peaceful transition of power

CBC of course does its part, claiming the threat is from Pro-trump extremists, which requires ignoring the actual facts.

Funny to hear CBC and other enemy propaganda sites refer to the Proud Boys as a threat the way they do, and not ANTIFA, and also to claim that what they do is not inciting violence. but this sticker/poster has been seen posted in cities here and there. How is this NOT inciting violence? And to be clear, we have on this site interviewed quite a few Proud Boys members and to a man they were all traditional, free speech, classical liberals. They in fact saved quite a few middle aged and unhealthy people from being attacked by ANTIFA while walking to and from their cars when ANTIFA was practicing violent intimidation. The Proud Boys are neither racist, nor violent. And even if they were racist, like for example, Lois Farrakhan, or ANTIFA with their genocidal anti-White racism and a dozen other leftist groups, that shouldn’t be illegal so long as they don’t break any laws in terms of how they act on those beliefs.

But they are not racist in any case.

The photo of the poster below IS NOT AN INCITEMENT to act on its message. In fact its the opposite. Yet another example among THOUSANDS of how a false narrative has been imputed to a group of really decent men, and incitement to kill them is being promoted because of that projected set of false attributes, and no penalty, no banning from Twitter, no jail time for conspiracy will ever be meeted out to who is almost certainly communist revolutionaries who made and applied that sticker/poster wherever it is. 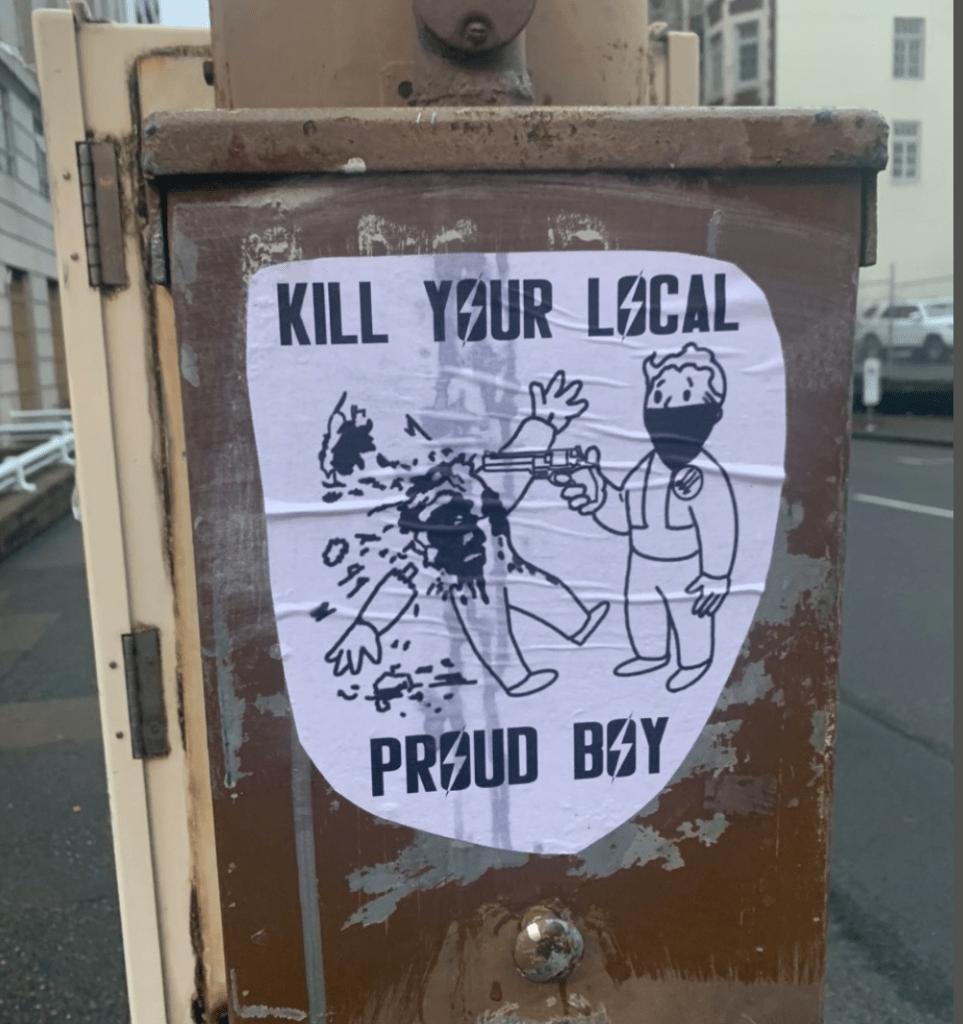 Here is one of those interviews:

Thank you all for your contributions to this site today so far. More to come for sure.

We can all look forward to a peaceful transition to military power.