If anybody thinks that the recent extreme Pakistani monsoon floods (see Red Cross photo below) and the US-instigated ousting of Pakistan’s Prime Minister, Imran Khan, are sheer coincidence, might be dead-wrong.

There are no coincidences. Within the timeframe of UN Agenda 2030, or the Great Reset, all is connected.

If heat and drought can be geoengineered, so can extreme rainfall and floods be artificially manipulated.

If anybody thinks that the recent extreme Pakistani monsoon floods (see Red Cross photo below) and the US-instigated ousting of Pakistan’s Prime Minister, Imran Khan, are sheer coincidence, might be dead-wrong.

There are no coincidences. Within the timeframe of UN Agenda 2030, or the Great Reset, all is connected.

During a recent conference in Switzerland on geoengineering, a professor of a top European Technical University began his presentation, by saying – there is no need explaining that the current wave of extreme heat waves throughout the Northern Hemisphere, for a record period without interruption, is geoengineered. So let us concentrate on how it’s done.

If heat and drought can be geoengineered, so can extreme rainfall and floods be artificially manipulated.

On 25 July 2018 Pakistan, a country with a 2022 estimated population of close to 230 million, elected the members of the 15th National Assembly and the four Provincial Assemblies, as well as their new Prime Minister.

The 2018 elections were not without violence. But the results were a clear win for Imran Ahmed Khan, an Islamic socialist of the Pakistan Tehreek-e-Insaf (PTI) party. See table below. 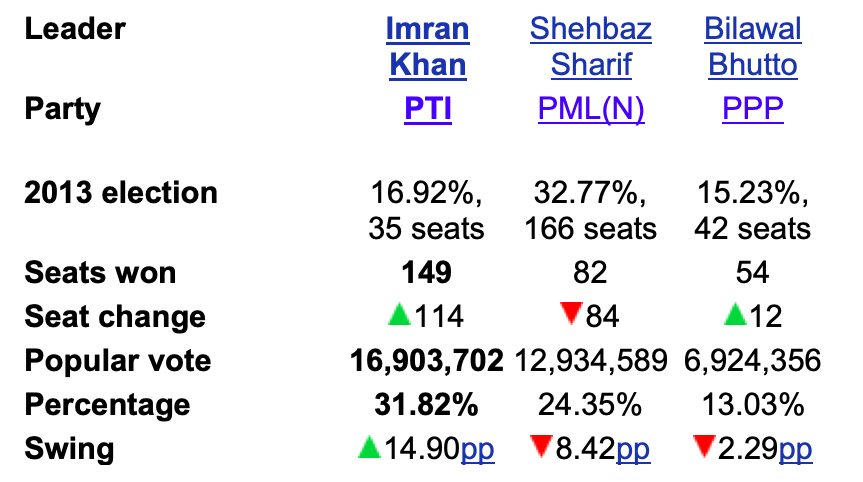 US Wants Pakistan to Turn Back to the Western Fold

The PTI terms itself an anti-status quo movement advocating an egalitarian Islamic democracy. The party aims to dismantle religious discrimination in Pakistan. It claims to be the only non-dynastic party of mainstream Pakistani politics.

The 2018 elections made clear that the people had enough of the US-managed “status quo”. Like the vast majority of the world’s nations, Pakistanis were also seeking sovereign autonomy among the globe’s nation states. The notion of a globalist world and under Washington’s scepter, was not of the Pakistanis. Imran Khan was a popular Prime Minister, of the type Pakistan never had since independence, in 1947.

On 10 April, 2022, prompted by a “silent” Washington instigated – speak corrupted – parliamentary no-confidence motion, Khan lost by a slim margin against a majority of 174 votes (out of 342) in the National Assembly. He was forced to leave the Prime Minister’s Office, thus, becoming the first Pakistani PM to lose a no-confidence vote.

Sworn in as the new PM was immediately Muhammad Shehbaz Sharif, as Pakistan’s 23rd and current Prime Minister, as of 11 April 2022. Mr. Shehbaz Sharif came in second in the 2018 elections with 24.35% vs Khan’s 31.82% of the votes. Mr. Shehbaz Sharif is the leader of the Pakistan Muslim League (Nawaz) – PML(N) party, a center-right and liberal conservative political party.

The PML(N) is allied with the US, and, therefore, Washington scored the perfect coup d’état; a pre-emptive coup, so to speak. The reason for the non-confidence vote is hardly mentioned by the mainstream media. As usual, they are paid for reporting on western interests, not on the interests of the people, let alone on the values of democracy.

The coup was not taken lightly by the majority of Pakistani people. They voted overwhelmingly for Imran Khan. People expected better and more stable living conditions and, foremost, independence from Washington-wielded western influence.

As a consequence of this coup d’état, Pakistanis took massively to the streets. Popular unrest was growing – when the monsoon hit – an extraordinary monsoon. According to CNN reports, rainfall nationwide is 2.87 times higher than the national 30-year average, with some provinces receiving more than five times as much rainfall as their 30-year average.

The monsoon season in Pakistan usually runs from July to mid-September. This year it started in mid-June, “coinciding” with the peak of people’s pro-Khan uprising. The monsoon hit with an extraordinary severity, peaking in the last week of August 2022 – and ongoing.

Islamabad was quick in towing the western climate-freak line.

Pakistan’s climate minister warned that Pakistan is on the “front line” of the world’s climate crisis after unprecedented monsoon rains wracked the country since mid-June.

By now some 5 million people were directly affected, more than 1,200 people were reported killed by the flashfloods and up to a million left homeless.

Associated Press (AP) reports that Nearly a half million people were crowded into camps after losing their homes in widespread flooding.

CNN adds that the southern province of Sindh, which has been badly hit by the flooding, has asked the UN for 1 million tents, while neighboring Baluchistan province — largely cut off from electricity, gas and the internet — has requested 100,000 tents.

Extreme floods have hit particularly the north center-west of Pakistan and the southern Province of Sindh. It damaged bridges and road networks across Pakistan, and agricultural crops. In the Sindh Province 90% of agriculture was wiped out. Agriculture damage country-wide will likely produce food shortages and falling export incomes. It’s an economic disaster – in all possible ways.

Pakistan’s agriculture sector plays a central role in the country’s economy. It contributes close to 20% to GDP and absorbs 42.3 percent of the labor force. It is also an important source of foreign exchange earnings and stimulates growth in other sectors.

Juxtaposing these extreme floods to Pakistani politics, may show how the dots are connected.

The Washington-inspired ousting of the highly popular PM Imran Khan created massive and lasting people’s uprising. If left unchecked, they may bring the former PM Khan back.

What better way than deviating peoples’ attention away from politics, then by creating a deadly disaster? And this in disguise of an extreme monsoon, never before experienced in Pakistan’s history?

Death and destruction, imposing devastating economic disaster, has never been a hindrance for the diabolical agenda of those behind Agenda 2030 and the Great Reset. And the WEF is just an executing agency for the corporate and elite financial cabal.

Remember: If heat and drought can be geoengineered, so can extreme rainfall and floods be artificially manipulated. Amply documented: “Environmental Modification Techniques (ENMOD) constitute instruments of “weather warfare”. They are an integral part of the US military arsenal:

“Weather modification will become a part of domestic and international security and could be done unilaterally… It could have offensive and defensive applications and even be used for deterrence purposes. The ability to generate precipitation, fog and storms on earth or to modify space weather… and the production of artificial weather all are a part of an integrated set of [military] technologies.”

Study Commissioned by the US Air Force: Weather as a Force Multiplier, Owning the Weather in 2025, August 1996

Only by being aware of the plan, and by seeing beyond the curtains of fatal deceptions, by stepping above the 24/7 lie-propaganda, may humanity be able to overcome this relentless onslaught.

Peter Koenig is a geopolitical analyst and a former Senior Economist at the World Bank and the World Health Organization (WHO), where he worked for over 30 years around the world. He lectures at universities in the US, Europe and South America. He writes regularly for online journals and is the author of Implosion – An Economic Thriller about War, Environmental Destruction and Corporate Greed; and  co-author of Cynthia McKinney’s book “When China Sneezes: From the Coronavirus Lockdown to the Global Politico-Economic Crisis” (Clarity Press – November 1, 2020).

Peter is a Research Associate of the Centre for Research on Globalization (CRG). He is also is a non-resident Senior Fellow of the Chongyang Institute of Renmin University, Beijing.

Become a Member of Global Research