Update (0940ET): The Brazilian health ministry said the coronavirus patient arrived in Brazil on a plane from Paris. Exactly when isn’t known.

Update (0855ET): In the US, Dems are officially doubling-down on their push to politicize the coronavirus outbreak and use it as a cudgel against President Trump by proposing a plan calling for even more money to be spent.

According to Fox’s Chad Pergram, Chuck Schumer is planning a $8.5 billion package that he plans to hand over to the appropriations committee later on Wednesday.

119 people are talking about this

President Trump is holding a press conference later today to discuss the outbreak. Yesterday, he said he would be handing off his administration’s $2.5 billion rescue package to Congress. President Trump has repeatedly insisted that the outbreak is under control, so we suspect that he fears a large number might spur panic.

Of course, in a situation like this, money can only go so far. As the CDC has demonstrated, containing an outbreak is more about decision-making and hard choices.

In other news, as we mentioned earlier, Germany is moving to implement some fiscal stimulus of its own.

Update (0750ET): While the Germans oppose closing borders in response to the outbreak in Italy, it appears Berlin has stepped up to rescue the market and placate economists begging them to roll out a fiscal stimulus program to stop the European economy from sliding into the gutter.

Futures soared on the headline, which is hardly surprising, as the market has already been primed for German stimulus, even if Berlin has always held the idea at a distance. Back in September, there was all that talk about a “shadow budget”.

As sentiment plunges, WHO’s Dr. Tedros has stepped in to try and soothe rattled investors, warning that government officials, economists, infectious disease researchers and any self-styled ‘experts’ should avoid using the word ‘pandemic’ to describe the outbreak.

Yes, while it does technically meet the definition of a pandemic, that word has some seriously negative connotations which Tedros feels isn’t really appropriate here.

Italy, meanwhile, has reported its 12th death after confirmed cases soared above 300 earlier.

Update (0730ET): The UK has announced plans to start randomly testing citizens with flu-like symptoms for COVID-19. The plan is part of measures to contain the virus as the UK has managed to avoid reporting any new cases over the past week. In England, random testing will take place at 11 hospitals and 100 doctor’s offices.

“This testing will tell us whether there’s evidence of infection more widespread than we think there is. We don’t think there is at the moment,” Cosford said. He added: “The other thing it will do is, if we do get to the position of more widespread infection across the country, then it will give us early warning that that’s happening.”

So far, only 13 people have been infected.

Update (0715ET): Abe’s government has officially denied comments made by a senior IOC member who suggested that the Tokyo Games might need to be canceled if the virus is still a threat in late May. IOC member Dick Pound told the AP that “a decision would have to be made by late May” about whether to cancel the games, according to the Washington Post.

The official position of the Japanese government is that the Games will not be canceled. Besides the obvious blowback for Japan’s already sagging economy and tourism industry, cancelling the games would likely have a serious psychological impact on consumer confidence in the world’s third-largest economy.

In other Japan news, Hokkaido, a prefecture in the north ofJapan, has urged schools to temporarily close as it struggles to contain the virus after a string of new cases popped up in the area. It was the prefecture’s first order to close schools since the epidemic began.

After cementing its largest two-day percentage drop in two years (going by points, it was the biggest two-day drop ever), stocks fell in Europe Wednesday as France reported its second virus-linked death (and first French national; the first was an 80-year-old Chinese tourist), while Spain confirmed 8 new cases within 24 hours.

The Frenchman who passed away on Wednesday was one of three new cases confirmed by health authorities. 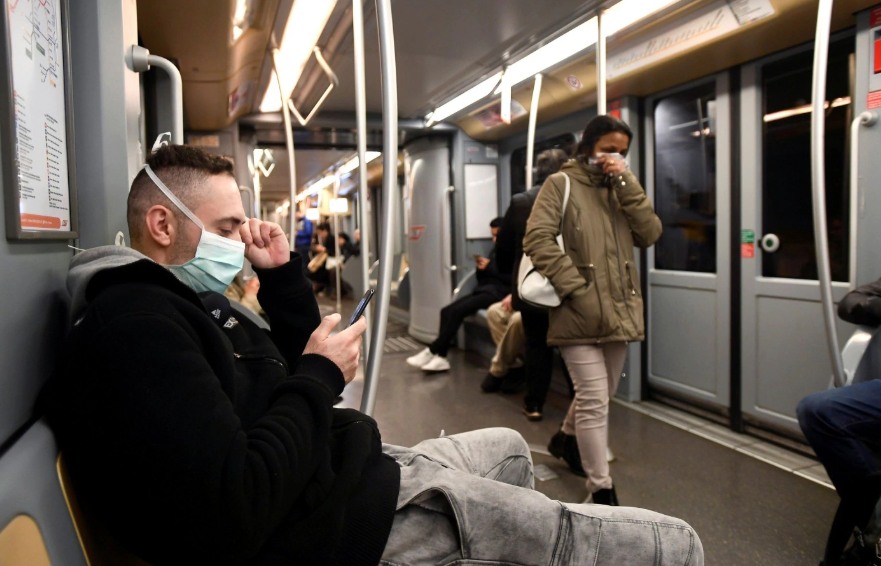 Over in the US, the CDC warned yesterday that “community spread” of the virus is “inevitable,” while President Trump and his administration continued to insist that everything is fine and that the outbreak in the US would soon die down. We also saw Croatia, Austria and Switzerland report their first cases on Tuesday following the EU health commissioner’s declaration that closing borders would be “disproportionate and ineffective.”

Are we the only ones who feel that this sounds like justification for closing the border?

Mirroring the situation on the Canary island of Tenerife, Austrian authorities placed a hotel in the Alpine city of Innsbruck under lockdown after a receptionist (an Italian who had recently visited outbreak epicenter Lombardy) tested positive, according to the Washington Post.

Just hours after Brazil confirmed the first case in South America, some of its continental neighbors are going on “maximum alert”. Guatemalan President Alejandro Giammattei said the country was battening down the hatches, and that its hospitals are fully stocked and supplied.

On Wednesday, Greece confirmed its first case in the city of Thessaloniki, while Iran reported 19 new deaths, bringing them, within swinging distance of the 50 deaths that a local lawmaker reported earlier this week. Confirmed cases in the revolutionary Islamic Republic have climbed to 139. According to Al Jazeera, Kuwait confirmed six more cases on Wednesday, bringing its total tally to 18. Bahrain reported three new cases, bringing its national total total to 26 as three women who recently traveled to Iran carried the virus back.

While European officials largely avoided the heavy-handed tactics used in China, government ministers urged people to avoid all “non-essential” travel as the outbreak spreads across Europe. The mystery at the center of the outbreak in Italy has compounded fears, as the lack of understanding contributes to the hysteria surrounding the outbreak.

“There is no prohibition,” said Spain’s health minister, Salvador Illa, according to El Pais. “But unless it is essential, do not go to a risk zone. It’s common sense.”

Rumors circulating around twitter yesterday claimed an official who had met with the Ayatollah only days ago had tested positive for the virus, becoming at least the second government official to catch the virus after the deputy health minister.

Mongolia has become the latest neighbor to tighten its borders and restrict internal travel. The country said it would restrict travel to and from its capital, Ulaanbaatar, to other provinces until March 3. A transportation minister said the country would take precautions with other flights from Europe, Russia Turkey and Kazakhstan. Egyptair has extended its shut-down of flights to China; flights were supposed to resume on Thursday.

The Philippines, which adopted travel restrictions directed at China, said Wednesday it would also impose travel restrictions on South Korea. The government announced an immediate ban on entry to travelers from North Gyeongsang province, where the coronavirus-hit city of Daegu is located. Japan also announced that it would bar travelers who had visited Daegu or Ceongdo.

Overnight, South Korea reported 115 more cases, in keeping with its 2-3 daily updates. The new total: 1,261. That number is, of course, expected to climb over the coming days as the country begins the mass-testing of 200,000 people, including members of the cult-like church that’s found itself at the epicenter of the outbreak in Korea.

Korea also reported that an American soldier was among the 169 cases reported earlier in the day (we noted it late last night).

Israel has yet to detect the virus within its borders, but another hair-raising revelation came to light Wednesday when South Korea’s CDC confirmed that the Korean Air cabin crew infected with the coronavirus had been on a flight between Israel and Incheon.

As Shinzo Abe’s government goes all-out to keep the Olympics on track, the PM announced on Wednesday that all major sporting and cultural events in the country taking place over the next two weeks should be postponed or canceled. This comes after the International Olympic Committee said the Olympic Games would go on no matter what, even if the outbreak keeps travelers away, the Japan Times reports.