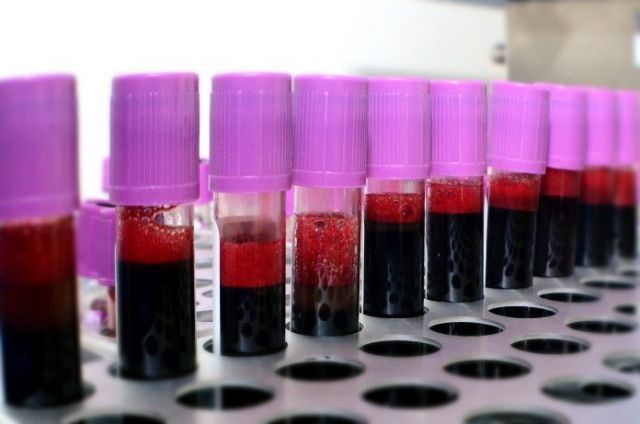 Whether billed as a community drive, corporate drive, team drive or emergency drive, the American public has long been called upon to donate their blood to help others in need.
“Giving blood is a simple thing to do, but it can make a big difference in the lives of others.”
“Every whole blood donation has the power to save up to 3 lives. Your donation could be someone’s only chance at another day.”
The catch phrases vary, and freely donating blood is indeed a positive action. But there is a darker side to the business of blood donation.
This video documentary, “Blood Business”, sheds light on the opaque trade of the blood plasma industry. From the impoverished streets of Cleveland, Ohio, to the golden shores of Switzerland’s Lake Zurich, the film explores the intricacies around the business of blood, and the price being paid by the humans involved.
Plasma, a component of blood which is highly sought-after, now costs more per liter than petrol. Used by pharmaceutical companies to create expensive medications, this precious liquid has become a lucrative commodity. This film investigates one of the largest corporations in this flourishing market, with profits soaring over €1 billion (US$1.13 billion). Their donation centers are mostly found in poor neighborhoods in the United States, and they pay donors for their blood – a practice forbidden in Europe.
For impoverished Americans, blood donations have become a source of income, presenting a real risk to their health, as they lie about their conditions and donate repeatedly to make ends meet. There are donors who give blood in the hope of helping others, but the reality of where their blood donations actually go can be somewhat different. This video documentary investigates the global trade in blood and plasma donations.
An interesting side effect (there are so many unintended consequences) of the coronavirus spread and subsequent lockdown across the country and around the world is a dire shortage of available blood. When nonessential businesses were mandated to close, blood drives everywhere were canceled, and orders of social distancing resulted in many people being afraid to go into established donation centers. Turns out the donation of blood was listed as an essential service on local health department lists, but they forgot to tell the public.
Chris Hrouda, president of biomedical services for the American Red Cross, which collects about 40 percent of the country’s blood donations, calls it a “staggering” drop in supply. “Our inventories have been cut in half,” Mr. Hrouda said. “We’re starting to get into a critical situation.”
From the New York Times, 17 June 2020
On a hstorical note, Dr. José Antonio Grifols Lucas, a scientist from Vilanova i la Geltrú, Spain, founded Laboratorios Grifols in 1940. There, he pioneered a first-of-its-kind technique called plasmapheresis, where a donor’s red blood cells would be returned to the donor’s body almost immediately after the separation of the blood plasma. This technique is still in practice today, eighty years later.
The World Health Organization (WHO) maintains the Model List of Essential Medicines which lists the most important medications needed in a basic health system. Fresh frozen plasma is on this list, considered critically important for
treatment of many types of trauma resulting in blood loss. It is kept stocked universally in all medical facilities capable of treating trauma cases.
So, what is blood plasma, this ‘golden’ elixir of life worth so very much to the medical industry?. The following is from Wikipedia…
“Blood plasma is a ‘yellowish liquid’ component of blood that holds the blood cells of whole blood in suspension. It is the liquid part of the blood that carries cells and proteins throughout the body. It makes up about 55% of the body’s total blood volume. It is the intravascular fluid part of extracellular fluid (all body fluid outside cells). It is mostly water (up to 95% by volume), and contains important dissolved proteins (6–8%) (e.g., serum albumins, globulins, and fibrinogen), glucose, clotting factors, electrolytes (Na+, Ca2+, Mg2+, HCO3−, Cl−, etc.), hormones, carbon dioxide (plasma being the main medium for excretory product transportation), and oxygen. It plays a vital role in an intravascular osmotic effect that keeps electrolyte concentration balanced and protects the body from infection and other blood disorders.”
References
https://en.wikipedia.org/wiki/Blood_plasma

Loading...
"Not by might, nor by power, but by my spirit, saith the Lord of hosts." Zechariah 4:6
BEFORE IT'S NEWS ON TELEGRAM
GET THE TELEGRAM APP - https://telegram.org/ JOIN OUR CHANNEL - https://t.me/BeforeitsNews
Read it..
BEFORE IT'S NEWS
SIGN UP FOR OUR NEWSLETTER
Today's Top Stories
Tsunami Coming! Biden Shocking New Revelations Only The Beginning
Sarah Westall: Military Coup! What is Planned & Names Behind the Plan - w/ Colonel Black & Harley Schlanger
Lawsuit Accuses Facebook of Watching Instagram Users Through Phone Cameras
SGTreport: Passion of the Christ's Actor Jim Caviezel Delivers NWO and Satan A Knock Out Blow
500K Taken into Re-Education Labor Camps & Mike Pence Issues Dire Warning to America!
Only 2% of All People Can Hear This Mysterious Sound – and Nobody Knows Why (Video)
Donald’s Greatest Show On Earth! Betrayal and Deception. The Nightmare Is Soon To Be Unleashed. Where Is This Coming Messiah Mentioned In Bible Prophecy? Awesome Videos
Crimes Against Humanity Exposed! Truth Will Be Told! - A Must Video!
Edgar Cayce: Strange Metals, Minerals and Stones... Their Magical Properties Were Noted by Cayce
X22 Report The Hunt Is On, [CF] Comes Into Focus, Crimes Against Humanity - Episode 2285b
Loading...
Featured
X22Report: The Hunt Is on, [CF] Comes into Focus, Crimes Against Humanity! - Must Video
Blue Coup! Are They Willing to Destroy Our Republic to Cover-up Their Crimes? - Must Video
X22Report: V Recovery Continues, Economic Foundation Being Built, Watch the Market & Gold! - Great Video
President Trump Holds "Great American Comeback" Rally in Jacksonville, FL - Live Feed Now Video!
Glenn Beck: The MSM Is Lying to You About the Breonna Taylor Story! - Must Video
Deborah Tavares: Our Survival Will Depend on What We Do Today
Steve Quayle Unplugged! War Looms, Fearful Will Run, We Will Fight Via The Hagmann Report
The Year 2020 Has Democrats Melting Down Like Never Before! - Great Video
RichiefromBoston: We Are Under Attack, Act Accordingly!
Taxpayer Funding it All! New Que Drops! The Destruction of America! - Great Video
Loading...
Top Global
The Seeds Have Been Planted For The Next American Civil War. I Don’t Think Anything Stops It Now.
SGTreport: General Wesley Clark "We're Going to Take-Out 7 Countries in 5 Years"
Wanna bet that Aus’ is a testing ground for what’s coming soon?
WATCH: President Trump Slams China at United Nations: ‘China Must Be Held Accountable’
After Trump Shut Him Up, Vengeful Fauci Made NEW Sinister Plans & He’ll Stop At Nothing To Get It!
RichiefromBoston: A Major Part of Their Plan Was Right In Front Of Our Eyes
Breaking! China Warns What Comes Next In Taiwan!
BioWarfare: Chinese Communists “Intentionally” Unleashed “Frankenstein” COVID-19, Says Wuhan Scientist!
China is Spying on Millions of People & They Aren’t in China!
Massive International Banking Scandal Crushes Bank Stocks, JP Morgan, Deutsche Bank, HSBC Plunge On FinCEN Leak! - Must Video
Loading...
Top Alternative
The Mandela Effect: The Man From the 'Country' That Does Not Exist! Multiverses
Edgar Cayce: Strange Metals, Minerals and Stones... Their Magical Properties Were Noted by Cayce
The Great Conservative Migration & What it Means for the Future
Ghislaine Maxwell's Friends Predict She Will 'Sell Out' Bill Clinton as New Revelations Emerge!! - Must Video
Soros-Funded Coalition Plans to Unleash Election Day Chaos That Could Far Surpass Floyd Protests!
Biden Voters Riot, Commit Arson, Vandalism, And Attempted Murder
American Civil War Looms as Trump Reveals Intention to Ignore Voting Results
Fatally flawed COVID vaccine monkey business.
Only 2% of All People Can Hear This Mysterious Sound – and Nobody Knows Why (Video)
Civil War: The Left’s Revolution Playbook EXPOSED