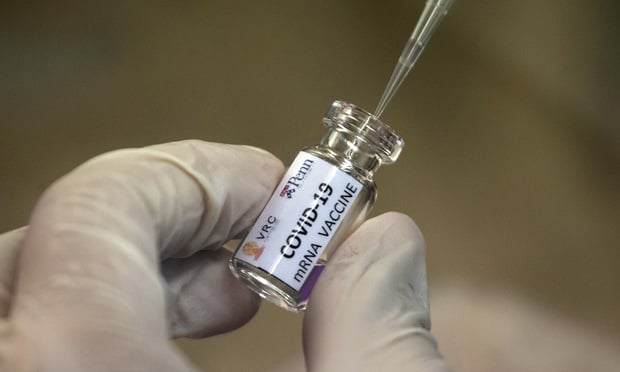 The New York State Bar Association on Saturday passed a resolution urging the state to consider making it mandatory for all New Yorkers to undergo COVID-19 vaccination when a vaccine becomes available, even if people object to it for “religious, philosophical or personal reasons.”

The resolution, which was passed by a majority of the bar association’s 277-member House of Delegates, includes conditions limiting its scope. Those include that the state government should only consider making vaccinations mandatory if voluntary COVID-19 vaccinations fall short of producing needed levels of population immunity; that an assessment of the health threat to various communities be made so that perhaps the mandate can be targeted; and that a mandate only be considered after there is expert consensus about the vaccine’s safety and efficacy.

In a statement Saturday afternoon, Mary Beth Morrissey, chair of the bar association’s Health Law Section’s Task Force on COVID-19, which in May released a controversial report that first proposed the idea of a vaccine mandate, said, “The authority of the state to respond to a public health crisis is well-established in constitutional law,”

“In balancing the protection of the public’s health and civil liberties, the Public Health Law recognizes that a person’s health can and does affect others,” said Morrisey, a lawyer who holds a doctorate degree in gerontological social work research.

The Health Law Section’s May report generated an uproar online, over the spring and summer, among anti-vaccine groups and lawyers who represent people injured by vaccines. But the relevant part of the 83-page report proposing a vaccine mandate was broader in scope, and more direct, than the resolution passed by the bar association Saturday.

The report recommended that it should be mandatory for all Americans to undergo COVID-19 vaccination, despite people’s objections, with the one exception being doctor-ordered medical reasons. There was no language about a mandate being limited to New York state residents, and no language saying a public recommendation should only be for the state government to “consider” a mandate.

Also various conditions in Saturday’s passed resolution were not present in the May report. Those conditions include that before considering a mandate the government should determine if voluntary vaccinations fall short of producing needed levels immunity and the condition that, depending on the health threat in communities, a mandate could be community- or population-targeted.

Still, the vote Saturday by the bar association, which with 70,000 members is one of the nation’s largest state bar groups, is significant. The association is considered to be influential both with lawmakers in Albany and Gov. Andrew Cuomo’s office.

In addition, the bar association’s vaccine-mandate recommendation, made public Saturday in a news release, appears to be unique. Both bar association representatives and certain lawyers focused on vaccine law, considered to be a small field of law, say they aren’t aware of other organizations, in or outside of the legal world, taking a stance on the notion of a mandatory COVID-19 vaccine.

The prospect of the resolution being passed Saturday, during a bar association hours-long video meeting, brought out an opposition rally in Albany before the vote even took place.

At 8:30 a.m., a group of parents, families and individuals who vigorously oppose mandatory COVID-19 vaccination marched from a central square in Albany to Cuomo’s mansion.

The rally was organized in large part by Patricia Finn, a vaccination-specialized lawyer who, for the last two decades, she has said, has represented thousands of families who have resisted vaccinations for medical and religious reasons. Finn said Friday in a phone interview that the marchers would waive signs and chant on their half hour trek to Cuomo’s mansion.

She added Friday that in her view, and in the view of many of her past clients, Cuomo and New York state have been especially “aggressive” among states in compelling children to take vaccines. She said New York’s rules governing taking vaccines and exemptions to it are much stricter than New Jersey’s and Pennsylvania’s, for example.

On Saturday afternoon, Finn said in an email to the New York Law Journal, “It seems like NYSBA [New York State Bar Association] retrenched and passed a resolution more in line with existing laws. It is more practical given the laws that exist. Vaccine mandates are a state issue so NYSBA obviously addressed that in the resolution.”

“More important though,” she said, “the parents opposing forced vaccines supported [state] candidates in the [Nov. 3] election that were in favor of.restoring religious exemptions in [the state]. The balance has shifted in the legislature and I believe this issue will be addressed in the legislature again soon.” She also said, “ Not sure why NYSBA saw a need to pass anything today and it is disappointing they are not addressing civil liberty issues and a Covid mandate.”

Bar Association President Scott Karson said in the group’s release Saturday statement, “The magnitude of the COVID-19 pandemic is unprecedented over the last 100 years by any measure – the number of lives lost, the survivors who remain seriously ill, the risks faced by health care workers, the disproportionate impact on communities of color, the profound trauma and the disruption to our economy.”

He said “the United States was unprepared to deal with this pandemic” and that the resolution, and its recommendations, passed Saturday were necessary.

The controversy generated among anti-vaccine groups and individuals over the Health Law Section’s original recommendation made in its May report was loud and unmistakeable. A May 28 New York Law Journal article on the health law task force’s recommendation that American be mandated to take a COVID-19 vaccine was passed widely across Facebook, for example. Independent-from-government-minded groups, including some on the right of the political spectrum, along with anti-vaccination groups shared the article in droves and group followers commented, sometimes by the hundreds. Comments were often laced with vitriol. Many commentators said they would protest a mandatory vaccination. Others said no government will be able to make them take a coronavirus vaccine that they say isn’t necessary and could be dangerous.

On pages 60-63 of the May report, which focused the “unique” legal and ethical issues brought forward by the coronavirus pandemic, the Health Law Section cited case law to back up its vaccine-taking recommendation.

“Mandatory vaccinations are supported by the authority of the state police power when the vaccinations are necessary to protect the health of the community,” the group wrote in the report, while citing the landmark 1905 U.S. Supreme Court decision Jacobson v. Massachusetts.

Pointing to constitutional law-focused cases, including the Supreme Court’s 1990 decision in Cruzan v. Director, Missouri Dept. of Health, the group said that “constitutional challenges under the religious freedom clause under the First Amendment and under the substantive due process clause of the 14th Amendment have failed, when the individual interests are not strong enough to outweigh the public benefit.”

In turn, some attorneys who represent clients injured by vaccines or who’ve refused to take vaccines despite orders to do so, as well as with some law professors, have challenged the bar association group’s interpretation of constitutional-based case law regarding state police powers.

In addition to making arguments during interviews with the Law Journal in June, the attorneys and law professors also distinguished between how certain pertinent case law should be applied to adults versus children, and they laid out some policy-based arguments against the idea of making it mandatory for Americans to take a COVID-19 vaccine.

In taking on the health law section’s arguments stating a range of cases support a vaccine-taking mandate when “individual interests are not strong enough to outweigh the public benefit,” the vaccine-injury lawyer, Finn, wrote, for example, that “while previous constitutional challenges under the religious freedom clause under the First Amendment and under the substantive due process clause of the 14th Amendment have failed, none of the cases cited by [the] NYSBA [health law section's task force] address [the] failed safety and efficacy of the mandated vaccinations, or the requisite necessity and ‘lack of a public emergency’ required by” Jacobson.

The Health Law Section then responded to Finn’s and others’ criticisms. The group’s task force chairwoman said in June that its “report rests on a body of well-established law,” and she underscored that her group’s report only “suggests the need for mandatory vaccination, when a safe and effective vaccine becomes available.”