A small plane crash landed on a highway section in the south of Quintana Roo, and it caught on fire  once on the ground. The plane that burned down in Quintana Roo came from Venezuela Sedena reported that the executive aircraft was detected by the CASS, the Comprehensive Air Surveillance System when entering Mexican airspace, coming from a route in South America.

The Secretary of Public Security of the state, Alberto Capella, reported through Twitter that in the Chunhuhub-José María Morelos road section, at kilometer 61, there was a small plane on fire.
“07:50 hours on the Chunhuhub – José María Morelos highway section at Kilometer 61, on the road an aircraft catching fire. Avoid the area please: José Maria Morelos, Quintana Roo, July 5. ”, he wrote on social networks. Note: There have been conflicting reports that the army may have shot at the plane.

Sources of the Ministry of National Defense (Sedena) reported that they found a vehicle with 390 kilograms of cocaine in the vicinity of the plane that landed this Sunday morning on the Chunhuhub highway to José María Morelos, in the Municipality of Felipe Carrillo Puerto, Quintana Roo.
There have been conflicting reports that the army may have shot at the plane.

Military authorities are searching the area for evidence to confirm that the drug was transported on the aircraft, a Hawker  executive jet with registration XB-RCM, apparently altered.

The head of the entity’s Public Security Secretariat, Alberto Capella, explained in his Twitter account that the aircraft was located at 7:50 in the morning at kilometer 61 of the aforementioned highway, catching fire, and that it was  related with illegal activities.
In the past year, Sedena has reported seven similar events, where propeller and jet aircraft have been used to transport drugs, and after landing in Caribbean states they are destroyed to prevent them from being tracked.
According to Capella, the registration number of the aircraft is be related to illegal activities.

“The registration of the aircraft is apparently XB-RCM and could be related to illegal activities. Federal authorities are attending to the investigation ”, the Quintana Roo Secretary of Security published. 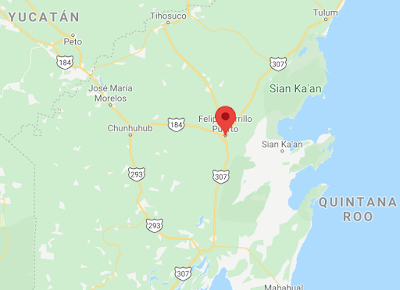 Elements of the police and the Mexican Army arrived at the scene to protect the area and make the pertinent investigations.
After these events, soldiers carried out a search operation to find the crew, who fled the scene minutes after landing, a Hawker jet, model XB-RCM, white.

According to a dependency calculation, the insured drug could reach a value of 109 million 151 thousand 250 pesos, in the illegal market, which represents a significant impact on the operation of criminal organizations. 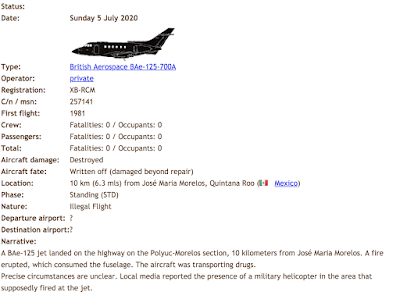 Within the framework of the National Plan for Peace and Security 2018-2024, and to contribute to the National Strategy for the Prevention of Addictions “Together for Peace”, the insured drug, aircraft and vehicle were made available to the Office of the Attorney General of the Republic.

Last April 2020 , a jet was secured by elements of the National Defense Secretariat, on a clandestine runway near the Reforma community, in Bacalar.

The plane had allegedly been used to  transport just over a ton of cocaine  from  South America.
The military elements received the report of an illegal overflight of a small plane over the municipality of Bacalar, which caused a search mobilization. The military arrived at the site around 07:00 hours where they found the jet that had already been unloaded.
Only fuel drums were found in the place, which are used by drug traffickers to set fire to air transport.
Also in January this year, a small plane landed  on the Vía Corta a Mérida highway in the municipality of Bacalar, Quintana Roo. The event occurred during the early hours of the morning, when the Mexican military noticed an illegal deployment, so an Army convoy came to intercept the aircraft, causing a confrontation.
The convoy’s military driver died and three more were wounded, including the commander of the 34th military zone in Quintana Roo.
According to a factual report,  the crew of the plane fled  and abandoned it in the middle of the road.

A light aircraft modified for a capacity of one ton, was seized in Bacalar (Photo: Noticcaribe)

In addition to the  modified airplane to support up to a ton of weight, two trucks, 201 drug packages, 2 long weapons and several cans of gasoline were secured at the scene .
The deceased was  General Vázquez Araiza  and the wounded were identified as  Corporal Celestino and Librado , as well as the  Brigade Commander, José Luis Váquez , this being the first high-ranking officer of the Sedena to be injured in actions against the drug trafficker. By the facts,  two people were captured.
Drug-laden aircraft passing through Mexico are not a new phenomenon, but their increasing frequency is,  due to the lack of effective controls by the authorities, often caused by the lack of tools such as radars or aircraft with sufficient capacity. In other cases, the flights have been facilitated by the corruption of the air authorities.
This type of transport is among the most used to traffic drugs, since it is easier to obtain them and they are difficult to intercept.
Among the vehicles detected in Mexico are jets. These transports are even more effective because they have a greater load capacity. and fuel, which provides more flight autonomy, as well as being faster than light aircraft.
The  modus operandi  identified by the authorities details that the criminals land the aircraft, get off, unload, burn them, and vacate the place.
The US Anti-Drug Agency detected that the most important criminal organization in Mexico, the Jalisco Nueva Generación Cartel, introduces drugs to the neighboring country through corridors that pass through Tijuana, Ciudad Juárez and Nuevo Laredo.
Coca trafficking includes the use of ultralight aircraft loaded with Colombian merchandise.


Source: http://www.borderlandbeat.com/2020/07/quintana-roo-small-plane-crash-lands.html
Before It’s News® is a community of individuals who report on what’s going on around them, from all around the world.