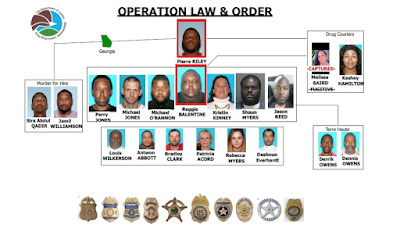 Several of the people involved in a notorious drug trafficking ring in Kokomo will spend decades in federal prison for the crimes they committed. Their arrests and prosecution are all a part of Operation Law and Order.
“Operation Law and Order” resulted in federal charges against 15 Kokomo residents in a wiretap investigation conducted in fall of 2017 through May 2018. The Kokomo Police Department reached out to the Drug Enforcement Administration to assist them with the dismantling the violent drug ring.
The DEA reported more than 17 pounds of methamphetamine, over two pounds of cocaine, two ounces of heroin, 122 grams of fentanyl, six ounces of marijuana, two money counters, 12 vehicles, $37,000 and 24 firearms were confiscated during the execution of several search warrants, served at 13 different locations in Kokomo and in the Macon, Georgia area on May 1, 2018 as part of Operation Law and Order.
“What made [Operation Law and Order] different from most, is we identified a murder for hire plot in this investigation,” Michael Gannon said.
Gannon is the assistant special agent in charge for the DEA in Indiana. He explained how the murder for hire worked.
Reggie Balentine, the head of the ring in Kokomo, got his supplies from Pierre Riley, a former Kokomo resident who then lived in Georgia. Through their wire-tap investigation, the DEA found out they became suspicious of an informant working alongside the DEA and buying drugs from the ring.
“They just felt that there was some red flags that they might have noticed, and with that, they were willing to kill him over that,” Gannon explained. “Not even with 100% surety that the person was cooperating against their drug trafficking organization.”
Riley’s son, Michael O’Bannon who lives in Kokomo, connected with two men in Georgia, Sirajuddin Qadir and Jamil Williamson, and offered them around $10,000 to carry out the murder of the informant. But, investigators found out.
“Because of the exceptional investigation that was done by Kokomo, DEA and the US Attorney’s Office, they’re able to understand that these people are coming down to do a possible hit of a confidential source,” Gannon explained. “So when that happens, everybody’s all in. You’re working 24-hour shifts and you’re doing what you can to protect people.”
Undercover agents saw O’Bannon, Qadir and Williamson and detained them. A search of their hotel room netted two guns and new clothing.
“Newly purchased clothing that would help make them less conspicuous to carry out their crimes,” Gannon explained.
Ultimately, Qadir was found guilty of attempted murder and conspiracy to commit murder and received 35 years in prison for those state charges. Williamson was extradited to Georgia where he is awaiting prosecution for a murder case there.
Around ten days after detaining those three, Gannon said agents received word another person involved in the ring, Jason Reed, was working on a plot to kill the informant. But, the evidence would not prove that beyond a reasonable doubt, so he was charged with federal drug crimes and got 35 years in prison.
O’Bannon, Michael Jones, Reed and Shaun Myers all from Kokomo, Indiana, were convicted on drug trafficking, firearms charges and money laundering, following a three-week jury trial in 2019. Recently, O’Bannon was sentenced to 450 months in prison while Myers received 350 months.

Balentine was sentenced to 42 years in federal prison. Riley is still awaiting sentencing. “Every Hoosier or fellow citizen here in Indiana deserves to live in a safe place, and people like this, they need to be in jail,” Gannon said. “They need to be held accountable.

This was absolute justice, the sentences that have been imposed. No question.” The success of “Operation Law and Order” can be attributed to a partnership between the Kokomo Police Department, the Drug Enforcement Administration, and the US Attorney’s Office for the Southern District of Indiana among other agencies.