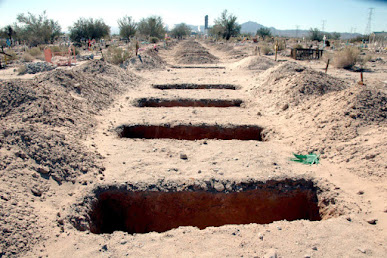 According to the registry of the Baja California Forensic Medical Service, since 2018 each year more than a thousand unidentified or unclaimed corpses are deposited in a common grave; The authority assured that it works to be able to help  relatives to identify and locate them later, although the exhumation is no longer conducted on their part and can represent a high cost.

“Dulce María” was rescued from the common grave by a group of women, who adopted her and moved heaven, sea and earth to prevent that from being her final destination. She spent three months in the facilities of the Tijuana Forensic Medical Service (Semefo) without being identified or claimed by anyone.

In September, the authorities reported the discovery of human remains inside an ice chest that was abandoned on a sidewalk in the El Pípila neighborhood; later they reported that the remains belonged to a minor, who suffered a motor disability in life.

The state coordinator of Semefo in Baja California, César Raúl González Vaca, explained that an average of four thousand bodies now end up in their Tijuana facility annually, 40 % of which are not identified or claimed, therefore they are destined for a common grave.

Semefo is in charge of managing the dispatch of the unidentified in Tijuana and Mexicali, a figure that in the last five years has been increasing gradually. Before 2015, the average between the two municipalities was between 400 and 500 per year; as of 2016 the figure increased to double. 2020 closed with 1,300 bodies.

“The established period to protect a body is 15 days. At the end of this time, it is the Public Ministry that determines whether it is sent to a mass grave or is retained, depending on the nature of the investigation itself, ”González Vaca explained.

When a body is released by the Public Ministry, Semefo is responsible for initiating an identification card. Photographs, genetic information and the medical opinion obtained through the necropsy performed on them are placed in this file.

González Vaca explained that most of the remains that are not identified are of people who lived on the street or in the context of migration. In the last five years, only five percent were claimed after being deposited in the common grave, and were identified by their relatives thanks to the data stored on the cards.

“Our work ends there. If the remains are finally identified, the next of kin must request the exhumation service from a private funeral home and carry out the corresponding procedure with the Prosecutor’s Office, ” he stated.

“It was very grotesque because they posted faces, the faces of people in the conditions in which they were found. We received bodies that have been quartered, slaughtered, well- they didn’t look very good. Yes, the page had many visits, but it was out of curiosity, not because of people who wanted to identify someone, unfortunately” said González Vaca.

That was a first attempt by the forensic authorities to help the people who came looking for their relatives who probably died in this city; and also as a measure to prevent the unidentified from ending up in a mass grave.

The second attempt began in 2015. The Judicial Branch of the State of Baja California added a section to its website to support the search for bodies. In this section ( http://www.pjbc.gob.mx/cuerpos.html ) the user must fill out a form with basic data such as age, eye color, hair type, complexion, sex, complexion and height. -See below for Link-

As a result, the page will return the profiles that are compatible with the provided features, without photos. However, for three years it has not been possible to update the profile base of the bodies that have been sent to the common grave in Tijuana.

“They do not give us the personnel, the workload is high, the autopsies that we have to perform and the people who are treated are many. As Semefo’s budget has not been expanded for many years, we have not been able to hire more staff to help us in this project, ” explained the coordinator.

For people looking for a deceased relative or loved one in Tijuana, they can go to Semefo’s facilities; After proving that they are looking for a relative, they are allowed to review the folders with photographs of all the bodies that have arrived at that facility.

“Ideally, this option would also be available on the web, to help people from other states to search for their relatives and thus not have to travel to this city to perform the search,” he added.

The state coordinator of the Forensic Medical Service stressed that only five percent of the bodies that are sent to the common grave are later identified, although not all are recovered by their relatives.

“In this process we do not participate, the family must go to a funeral home to request the service of exhumation of the corpse. We don’t do that work, “he said.

According to activists who support the search for disappeared persons, the high cost of exhumation services inhibits the wishes of the relatives to give them a dignified burial and they decide to leave them in the common grave. As many of you have read here on BB there are now many groups voluntarily searching for the missing. Many are composed mostly of women, mothers, sisters aunts etc who are literally raking the countryside. Thus the name of one “Las Rastreadoras”.

“Yes, there have been isolated cases that have managed to recover the body of a relative. But we are talking about an expense of up to 45,000 pesos just for the exhumation, the funeral services are separate, ” said the activist. This is why people must go to various funeral homes to find one whose costs suit their budget.

Also, the difficulties that arise to carry out the procedure diminish the spirits of the people who intend to recover their relative from the grave. “It is common for them to go Semefo and the Public Ministry several times, because they give them half-way information. There is not a page or a document where they put all the information or all the steps they must follow, ” he said.

Welcome to the Corpse Identification System of the Forensic Medical Service of the Judicial Power of the State of Baja California. Below we put at your disposal the following technological platform in order to provide you with a simple access portal, which allows you to obtain important information regarding the bodies that have been made available to the Forensic Medical Service of the State of Baja California (SEMEFO) and that They are unknown, thus facilitating that they can be located, identified and claimed by their relatives.

This information is made available to you based on Article 2, Section II of the Law on Access to Public Information for the State of Baja California, as well as Article 8 of the Political Constitution of the United Mexican States.

How can I do a search?

Performing a search is very simple, it is only necessary to carry out the following steps:

Select the “Search” option in the menu

Indicate the most relevant characteristics of the person you are trying to locate, such as:

The portal will present a list of results to be able to search for particular signs such as tattoos, moles, scars, etc. that facilitate identification.

If you find one or more results that correspond to what you are looking for, you can contact the SEMEFO offices in the city where the portal indicates that the body is located, in order to provide you with more information and the necessary guidance.