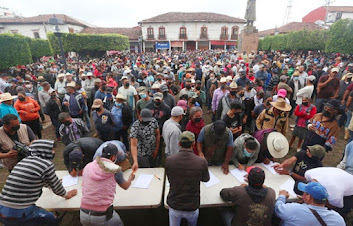 Michoacán avocado producers who have taken up arms to defend themselves against organized crime sent a clear message to authorities on Wednesday after state Security Minister Israel Patrón warned they would be forcibly disarmed if they refused to lay down their weapons.
“Disarm the narcos first,” members of the Pueblos Unidos armed group declared at a rally on Wednesday in Ario de Rosales, one of four neighboring municipalities where farmers and farmhands have taken up arms over the past eight months to defend themselves and their land from attacks and extortion by the Jalisco New Generation Cartel (CJNG) and the Los Viagras crime gang.
Pueblos Unidos members reiterated that they would only disarm voluntarily if authorities can guarantee their safety in Ario de Rosales, Salvador Escalante, Nuevo Urecho and Taretan.
“With complete respect for our governments, they should do the work and we’ll put down our weapons and go and work on our land, which is what we know how to do,” one of the group’s members said.
“They want to disarm us, they say we’re violating the law. Yes, we have high powered rifles but believe me it’s not for pleasure. We did all this out of necessity. The [local security] authorities had been overwhelmed,” a Pueblos Unidos leader told the thousands of people in attendance. 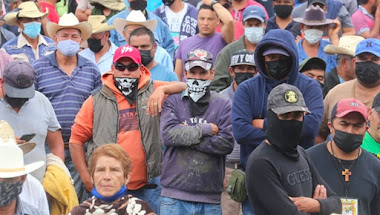 The rally attendees signed a petition urging the federal government to deploy the National Guard to each and every one of the more than 50 roadblocks the armed group has set up across the four municipalities to prevent incursions by members of the CJNG and Los Viagras.
If the guardsmen are deployed to the area, located approximately 100 kilometers southwest of Morelia, the members of the armed group said they would be prepared to lay down their weapons.
“We took the decision … to take up arms because my brother was kidnapped on June 13 [2020] and we never heard anything of him again,” one woman told the newspaper Milenio.
Her brother, identified only as Juan Manuel, was an avocado farmer who refused to pay hundreds of thousands of pesos in extortion payments to a criminal group. His family paid a 300,000-peso (US $15,000) ransom but he was never returned.
“If we were criminals, do you think that women would be here? Do you think that children would be here? We’re not criminals, we’re good people, we’re fighting for our rights, for ourselves, for our children,” said Juan Manuel’s cousin.
Rally attendees told Milenio that behind every man who left his avocado farm to take up arms is a story of at least one encounter with criminals. One woman, identified only as Diomira, lost part of two fingers three years ago when her family was targeted in a shooting perpetrated by a criminal group that wanted to force them off their land.
“Why don’t you have two fingers,” a Milenio reporter asked, to which she responded: “Because of gunshots, they were blown off when I was defending my land, my avocado crops.”
Ario de Rosales Mayor Irma Moreno agreed to the farmers’ request for her to attend Wednesday’s rally but the National Guard official responsible for operations in the zone where the four municipalities are located declined the invitation.
“We want a municipality that is at peace and calm,” Moreno said, adding that the municipal government would do what it could to facilitate a meeting with federal authorities.
Patrón, the Michoacán security minister, said Tuesday that state authorities are planning a joint operation with the army to combat organized crime in the four municipalities but he didn’t indicate when it would start or how many soldiers and police would be deployed.
Sources: Milenio; MND