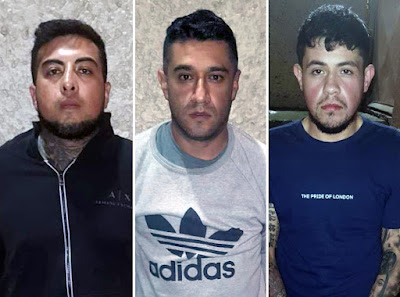 “El Tomate” and “El Daza”, leaders of La Unión Tepito were arrested yesterday by members of the Mexico City police (SSC-CDMX). Officers say they will be charged with the crime of drug dealing and organized crime.

On the night of August 18, 2021, three men were seen to be handling firearms near a  barbershop on Guerrero Street within the Cuauhtémoc district of Mexico City. Police who saw the firearms they were carrying arrested the three men.

Following their arrest, the three pistols and a frag grenade were seized from their possession (seen below). Also found to be in their possession and seized was 195 bags of cocaine and 100 bags of marijuana. 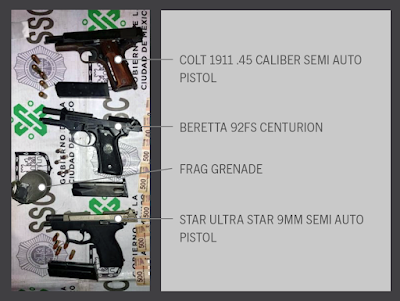 They are: Israel Cortez Villaseñor, alias “El Cors”, Renat Dassae Esparza Vera, alias “El Daza”, and José Mauricio Hernández Gasca, alias “El Tomate”. All three men belonged to the prominent Mexico City cartel La Unión Tepito.
It is unknown if police just happened upon the men or if this was a planned operation. However La Silla Rota writes that “El Tomate” and “El Daza” were wanted by authorities ever since they were released from detainment by controls judges in 2020. In addition, Cuspide Mexico said the arrests came “Thanks to the intelligence, investigation and follow-up work”, however those are generically listed often in press releases. 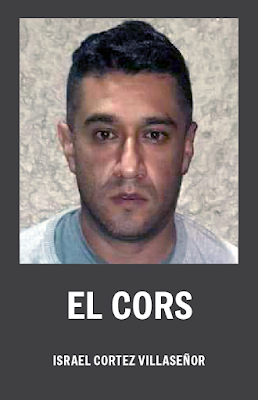 The arrest was confirmed by the Secretary of Public Security, Omar García Harfuch, who reported on his Twitter account that “Today, two leaders of a criminal cell dedicated to cobra de piso [regular extortion fee paid by businesses] and extortion in the Historic Center of Mexico City were arrested, as well as the sale and distribution of drugs. These subjects are responsible for ordering and participating in several homicides.”
The two leaders referenced in Harfuch’s tweet are “El Tomate” and “El Daza”. Meanwhile the third man, El Cors, may have been acting as a bodyguard for the two men at the time of their arrest.
Both El Tomate and El Daza are described by news publications as leaders of a La Unión Tepito cell that primarily operates within the Centro (or Central) area of Mexico City. Both men have also been arrested multiple times and previously been released by control judges. This led some to speculate that their power in the city or wealth allowed them to skirt justice. In fact, many publications assert that both men are part of the inner circle of the La Unión Tepito kingpin Roberto Mollado Esparza, alias “El Betito”.
Warning: Some graphic photos below.
El Tomate

On September 14, 2018, six people were shot to death and seven more were injured in Plaza Garibaldi, a plaza better known as “Plaza de los Mariachi” which is famous for its live music bars. The plaza had been a festive scene that night because the next day was the holiday El Grito, or Mexican Independence Day. Allegedly men disguised as a mariachi band made their way through the buzzing plaza and distracted party goers until they were shot by fake mariachi members and another in plain clothes. The hitmen then fled the scene on motorcycles.

The mariachi disguises may at first sound like a tall tale, however it was later confirmed by the state Attorney General’s Office (PGJ) when one of the assassins Fernando Aguilar, alias “El Rata” was arrested and they released a statement saying “In the investigation it is established that on the day of the attack, the defendant and two other individuals dressed in mariachi went to an establishment located on the street República de Honduras and with firearms and opened fire.” El Tomate was later accused of being another one of the hitmen on the scene who opened fire. Three of the six victims died on scene. Another victim later died in the hospital from gunshot wounds. The shooting was suspected to have been a La Unión Tepito hit on Sergio Flores alias “El Tortas” the leader rival cartel Fuerza Anti-Unión (Anti-Union Tepito Forces). El Tortas however escaped the incident unscathed. 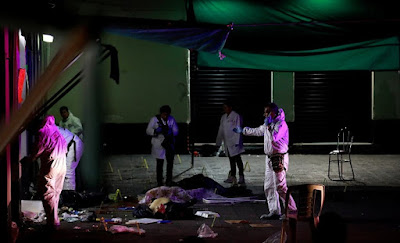 Milenio newspaper reports that on June 6, 2019, he was captured – by chance – when he paid a bond for his girlfriend, who was arrested for a traffic violation. After paying her bond, “El Tomate” was identified by an officer who had been looking for him for two years and subsequently Tomate was arrested on charges of “narcomenudeo”, or small scale drug dealing. Law enforcement authorities also began more seriously looking into their suspicion of Tomate’s involvement in the Garibaldi shooting. 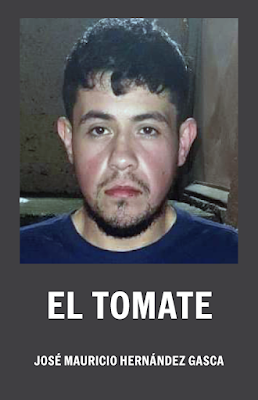 After nine months in Reclusorio Norte prison, on October 16, 2020, El Tomate had his final hearing before a judge and the Mexico City Attorney General’s Office (FGJ-CDMX) was unable to prove he was implicated in any crime. The FGJ was counting on the testimony that a witness made against El Tomate in which he accused him of murder, extortion and kidnapping; however, the authorities were later unable to find the witness due to “not having his official address”.

El Universal reports that the FGJ said they were going to find footage from various security cameras which captured El Tomate in the act of a crime, but for unclarified reasons the footage was not presented during the hearing. The judge then granted him his freedom and he was released from custody. Outside of court several luxury vehicles were already waiting for him and within a matter of minutes, El Tomate was whisked away.
El Daza
On January 30, 2011, Renat Dassae Esparza Vera, alias “El Daza” or “El Dassa” and a friend blocked the way of a passing vehicle with their gray Ford Lincoln car. They got out of their car, held the driver at gunpoint and demanded he hand over his cellphone and gold jewelry. The victim handed over the items and the two armed men escaped. However, right after the robbery, the victim called the police who were able to respond quickly and were able to give chase, eventually catching up with them and leading to their arrest. 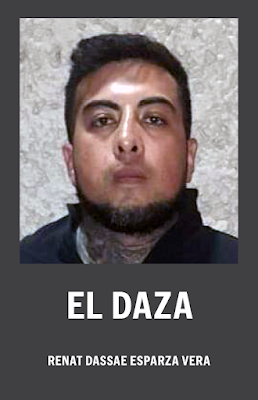 A 2011 La Jornada article describes that El Daza was believed to have belonged to a gang dedicated to the armed robbery of motorists in the Gustavo A. Madero delegation at this time. As a result of his arrest, El Daza was imprisoned in Reclusorio Norte prison, in northern Mexico City. This was not Daza’s first time in prison as he had previously been sent to Reclusorio Oriente prison in southern Mexico City in 2009 on unknown charges.

On December 13, 2019, three subordinate cartel members of El Daza were arrested by police. In their possession, officers found videos of the members beating kidnapping victims. These videos were then sent to the victim’s families in order to prompt them to more readily pay the ransom fee. These video seized on the cell phones of the three subjects also contained evidence that set the SSC on the trail of hunting down El Daza.

On December 18, 2019, El Daza was arrested by intelligence agents of the SSC while he and another cartel member, alias “El Barnie”, were threatening a shopkeeper while in vicinity of the Granaditas Market. Their arrest was part of a larger push against La Union members which led to the arrest of 11 extortionists in that same week. Two motorcycles were seized, a Ducati and a BMW. They were also carrying a pistol, a submachine gun, and bags with cocaine.

At the time of this December 2019 arrest, El Daza was said to be working directly under “El Hormiga” and “El Tuntun”, who were in charge of a La Unión cell of extortionists operating against merchants in Historic Center, La Morelos, Tepito districts. According to a 2019 article by Julio Astillero, El Daza was personally in charge of extortion for the Peña y Peña, Manuel Doblado, El Eje areas on behalf of his group.

El Daza was sent back to Reclusorio Oriente prison on drug trafficking charges but he was released by a judge on January 6, 2020, which is less than a month after his arrest. 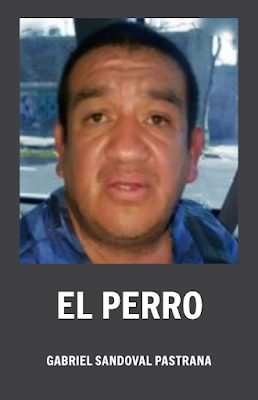 Antonio Nieto, a journalist and author on cartel activity with a specialty in Mexico City,  says that both El Daza and El Tomate report to “El Chori”, a high ranking member of La Unión Tepito. They also are believed to provide protection to a Colombian cell operating in the Centro area of Mexico city who organize a “gota a gota”, or loansharking network.

Nieto also writes that currently El Daza together with Gabriel Sandoval Pastana, alias “El Perro” control all the extortion done in the Centro district of Mexico City, with all the various collectors reporting to their authority. El Perro is an interesting figure as he is thought to be close friends with infamous La Union kingpin “El Betito”.

According to police records, Roberto Moyado Esparza alias “El Betito” went from stealing luxury watches in Polanco to forming a group of hired assassins who sought control of the sale of drugs in the downtown area. He then went on to lead the criminal group of La Unión, lasting as its kingpin for a long period of time, in which Union dominated by some estimates 12 out of 16 plazas of Mexico City. His time as leader was also known for being one of a bloody wave of violence in Mexico’s capital city. 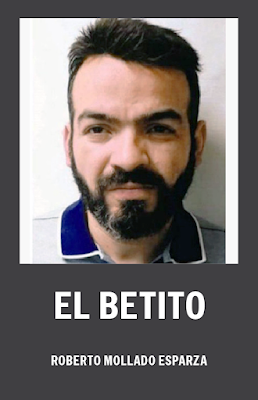 On August 8 2018, El Betito was arrested alongside his brother and charged with allegedly possessing 80 grams of methamphetamine. El Betito cut a considerably different figure in his 2018 headshot. The National Security Commissioner, Renato Sales, explained in a press conference that “El Betito” underwent gastric bypass surgery and lost 30 kilos to avoid being identified. Milenio reports he also underwent hair grafting to regain a full head of locks. 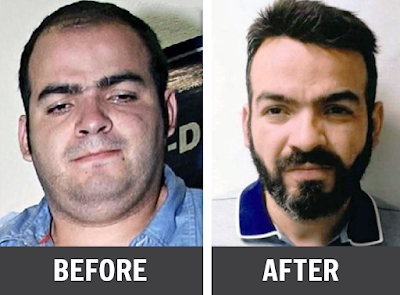 Following an initial hearing by a judge, El Betito and his brother were transferred to the federal prison of Villa Aldama at the request of the Government of Mexico City, for representing a risk for the prison population of the capital and also to guarantee their safety. The Attorney General of Mexico City obtained an arrest warrant for El Betito from a local judge which would bring Betito back to a Mexico City jail.

The National Security Commission then determined that Betito would not return to a Mexico City prison despite warnings issued by a federal judge who threatened to arrest various authorities for not following his order to bring Betito back.

On November 5, 2018, the control judge Gregorio Salazar Hernández requested the support of the Secretary of National Defense, Salvador Cienfuegos Zepeda, to complete an arrest order against the head of the federal prison for disobeying his order. The arrest did not end up occurring but El Bieto was later moved back to a Mexico City prison. However in July 2020 a maximum security prison, the location of which has been kept secret with authorities only detailing that it is either in Oaxaca or Chiapas.