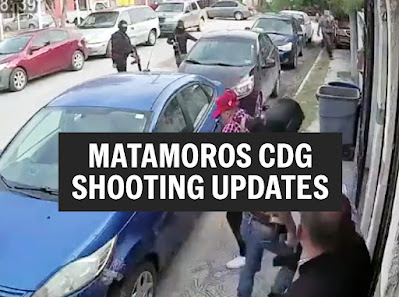 As recently covered by Guerrero in this previous post, a major shootout between cartel members occurred in the streets of Matamoros, in the state of Tamaulipas, on Sunday, October 18, 2021.

Warning: Graphic photos below this point.

Now that the dust has begun to settle further details have emerged about the exact sequence of events. The Secretary of Public Security for the state of Tamaulipas told the press that at 7:30 am local time State Police officers were on routine surveillance patrols when they surprised armed cartel members who were in the process of stealing a trailer in the 20 de Noviembre neighborhood of Matamoros. 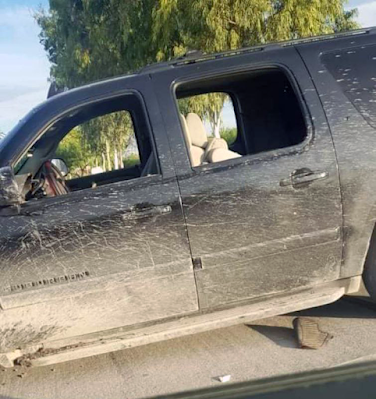 In response to being spotted in the act, the cartel members reportedly open fire on the officers. The State Police officers reportedly repelled their attack and a vehicle chase through the city. In this first confrontation and chase, two state officers were reportedly injured and they were transported to nearby hospitals. 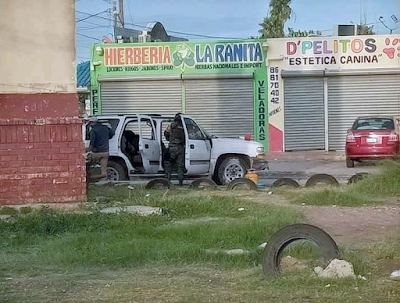 After the officers radio-ed in the attack they had just encountered, soldiers from the Army (SEDENA), National Guard and agents from the State Attorney General’s Office (FGE) responded to the request for backup and joined in searching the city for the attackers. The search and chase operations were captured in various videos in different parts of the city, as seen in Guerrero’s post. 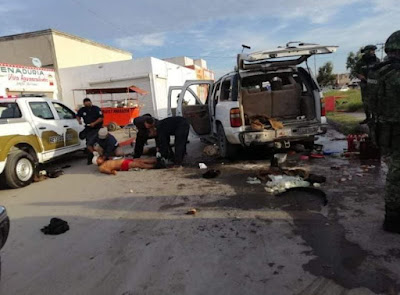 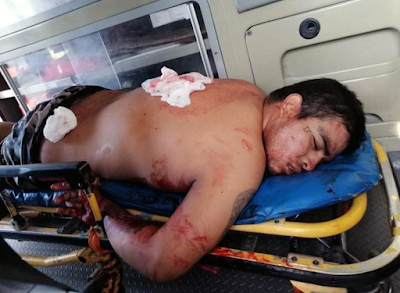 Four cartel members were killed by SEDENA soldiers according to reports in this second confrontation. New photos that appeared online presumably show these men as between three to four cartel members can be seen in the back seat of a vehicle. 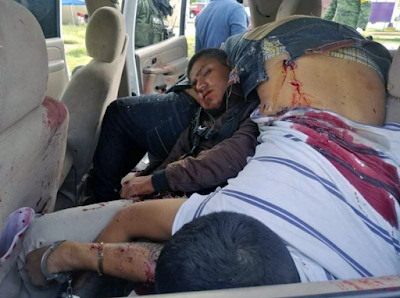 One of the men appears to be wearing handcuffs, suggesting he may have been arrested while injured and succumbed to his injuries following his arrest. However reports are unclear in these specifics. Four surviving cartel members were arrested during this second confrontation.

At least five cartel hitmen managed to flee during either the first or second confrontation. A new video, seen below, allegedly depicts the point at which these men run into civilians.

In the video, a civilian man can be seen trying to duck down from the nearby gunfire behind a parked blue sedan vehicle. One of the hitmen who is wearing a red hat quickly motions the barrel of his gun towards the man, evidently making it clear the civilian needed to hand over his keys to his vehicle which the civilian promptly and immediately does, tossing them to the ground in front of him.

Some sort of secondary set of keys on a lanyard is tossed back and forth between the civilian and the hitmen who are starting to pile into the black car. The hitmen eventually drive away just as a woman comes out to check on the civilian man, who wraps her in a hug and pulls her back inside the house for safety.

Later both watch as the vehicle reverses back from the direction they came from. Then evidently some cartel members approach the man and woman again, and the two indicate that they now have the keys to the blue car ready to hand over if the hitmen are needing another car.

It is important to mention that the Gulf Cartel (Cartel del Golfo, CDG) is not a single, monolithic entity, but a cartel that is seemingly divided (and often categorized by researchers of the organization) by the region that each CDG faction maintains as their stronghold.

So people will often describe the “Gulf Cartel Matamoros faction”, “Reynosa faction” or “Río Bravo faction”, as just a few examples of many. These titles refer to the major Tamaulipas cities that each entity holds as their main base of operations. In the case of the shooting yesterday, it is believed to have involved the CDG Matamoros faction, which is primarily made up of the CDG group which calls itself “Los Ciclones”.

So who are these “Escorpiones” being mentioned so often in relation to the shooting in Matamoros yesterday then?

The “Escorpiones” term originates from back in the days of Antonio Ezequiel Cárdenas Guillén, alias “Tony Tormenta”, in which his elite personal guard began calling themselves “Escorpiones” during the tense fallout that occurred between him and his brother Osiel Cárdenas Guillén. However, it is believed that after Tony’s 2010 death, the group Escorpiones ceased to exist. 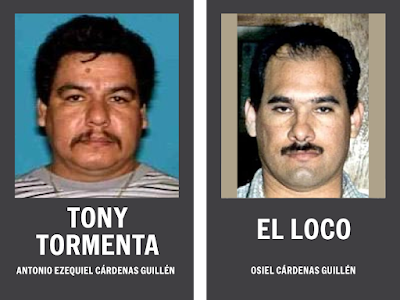 However Escorpiones actually re-emerged with a new life, in both CDG Matamoros and CDG Tampico, calling themselves “Grupo Escorpiones” in the year 2015. Of note, CDG Tampico has a long history of working closely with the CDG Matamoros faction so this kind of lockstep development of new groups is not unusual when you consider their history.

Frustratingly, cartel analysts cannot seem to agree on the relationship between Los Ciclones and the modern version of Escorpiones. What is known is that Ciclones and Escorpiones work so closely together that they can essentially be thought of as one entity, with analysts simply debating smaller distinctions such as if Escorpiones are the armed wing of Los Ciclones or if Escorpions is merely a temporary rebranding of Ciclones.

Borderland Beat writer MX has said it’s best to think of Escorpiones as a largely outdated term, as it only further muddies a very important recent divide within the group: the birth of an opposing force within CDG Matamoros called Los Espartanos. 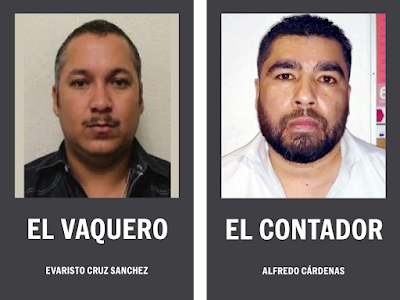 Further complicating this is the fact that El Contador himself is a Cárdenas family member, however he has allegedly felt ousted by other members of his family due to his time spent in prison hence his opposition to the overall Cárdenas family dominance.

Members of Espartanos are often former Ciclones members, which often leads to some degree of confusion as famous Espartano leaders such as El Vaquero are sometimes described in mainstream news sources as members of Los Ciclones (or even less helpful, they are described as “Escorpiones”).

Leaders within both Ciclones and Espartanos may still be primarily referred to by an old alias such as “Escorpiones 24” or “Ciclone 3” regardless of which subgroup they currently fall under. 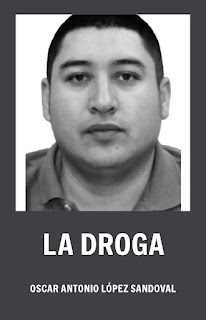 What’s been going on recently with the CDG Matamoros faction?

For a brief, high level overview of the recent history, the CDG Reynosa faction and the CDG Matamoros faction (both Ciclones and Espartanos) have maintained a pact of non-aggression in recent years since there were more pressing threats to their control such as their cartel rivals: the Northeast Cartel (Cartel Del Noroeste, CDN) and Old School Zetas (Zetas Vieja Escuela, ZVE).

When people speak about the CDG Reynosa faction they often mean Los Metros, a CDG subgroup who is best  known today for their alliance with Cartel Jalisco Nueva Generation (CJNG). However it is worth mentioning that Ciclones and CDN are both thought to have some degree of presence in the municipality of Reynosa. 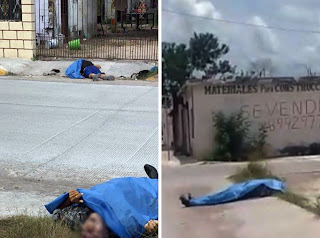 However, this pact of non-aggression between CDG Matamoros and Los Metros seemingly disintegrated on June 19, 2021, when a group of cartel members shot 15 people dead in Reynosa. The prevailing rumors at the time was that CDG Rio Bravo and CDG Matamoros were behind the attack which drew widespread attention and law enforcement focus down on cartel activity in Reynosa.

It was believed that CDG Matamoros had chosen to violate their non-aggression pact with Los Metros because they had decided they wanted to end the reign of the two foremost Metros leaders, Miguel Ángel Álvarez Campos, alias “El Miguelito” in the city of Reynosa itself (according to a June 2021 Milenio article) and César Morfín Morfín, alias “El Primito”, in La Frontera Chica region. 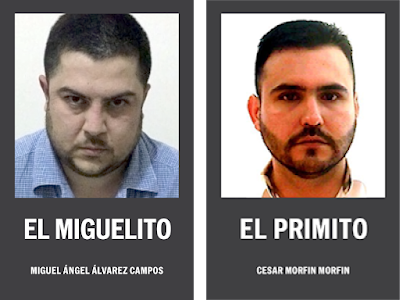 Of note, El Primito has allegedly been dealing with a coup d’état attempt within Los Metros in recent months, led by El Pezon and El Sierra Flaco, however he has seemed to survive the worst of it as of the writing of this story. 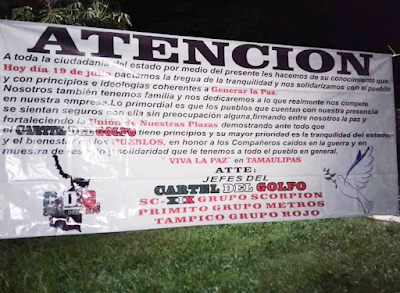 However, only a month after the non-aggression pact was seemingly broken by the Rio Bravo and Matamoros factions, a sign announcing a new truce between the Metros and the Matamoros faction (as well as the Tampico faction, because again, they work in lockstep with Matamoros) appeared. Whether that truce was upheld or not is up for debate though.
So, how do these recent events and faction divisions play out in terms of the shooting yesterday? It’s too early to say as of the writing of this story but it’s something to keep in mind as details such as the names of the four arrested detainees are presumably later released when a judge approves their preventative detention. Identifying which subgroup of the CDG the members belonged to may be key to understanding the real nature of the Matamoros event. Whether it was intended to heat up the plaza or if it genuinely was as simple as a trailer theft gone wrong.