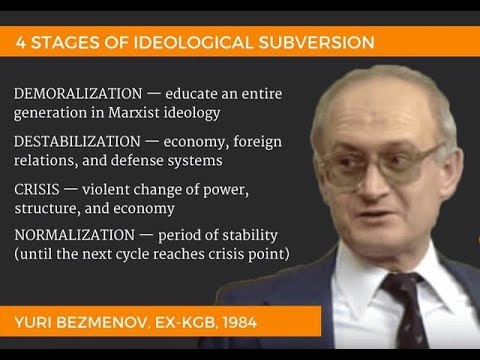 The ‘new normal’ is [Bezmenov's] fourth stage.
And the ‘new normal’
which our Global Commissars are engineering
through the ‘CoVID pandemic’ is UN Agenda 21.
This will involve biotech and the re-engineering
of the human genome on a mass scale.

IN HER APRIL 2020 ARTICLE – COVID SECURITY STATE HERE TO STAY   AUSTRALIAN GRANNY ‘LINDE’ SAID THERE WOULD BE NO ‘CURE.’  SHE WROTE, ”CoVid 19 is the UN instrument to bring vassal nations / UN member states into line with Agendas 21 – 30 for the world soviet of the goy plantation.”

The Whole Hoax of the CoVID ‘pandemic’ is not a medical emergency or any kind of emergency. It is a semantic emergency and platform for the construction of a world soviet.

“There is no deadly ‘pandemic’ “. There is, however, a semantic ‘pandemic’ according to the new rejigged definition of ‘pandemic’ adopted by the UN to whit: “arise in case numbers” of whatever they designate to be cases of concern. ‘The case’ could be anything: nuts, peanut allergies, Trump derangement Syndrome, Burning Looting, and Murder ‘largely peaceful protests’, hurt feelings due to Homophobic micro-aggressions. Anything.

So we are transitioning to a ‘normalization’ in terms of ex-KGB Yuri Bezmenov’s ‘Four Stages of Subversion’.

The ‘new normal’ is the fourth stage. And the ‘new normal’ which our Global Commissars are engineering through the ‘CoVID pandemic’ is UN Agenda 21. This will involve biotech and the re-engineering of the human genome on a mass scale.

In these terms, CoVID is a simulation exercise. It is both platform and USHER into the international world state that has been mapped out in UN Agenda 21 since the Rio Earth Summit 1992.

According to the Protocols of Zion 5.11, the first supranational world state is a ‘bogey’. It will be created by The Owners, namely the Directorate of the world central banking cartel. And it looks to me like it will be created under the aegis of Marxist national governments – all subverted, all owned as assets of the central banking cartel, all seated in the UN and all in lockstep with CoVID dictate from the Global Preparedness Monitoring Board.

The way I see this ‘bogey’ shaping up is that it will be assigned the draconian, worst-case bad guy Communist, evil Capitalist script of Globalism. [ Pause to shudder appropriately ]. It has been planned to be an absolute stink of an international order with a massive de-population Agenda. The Marxist governments (wall to wall Commissars) of the subverted Western nations will supposedly be responsible for this UN Agenda.

They are being scripted to make the big Communist genociders of the twentieth century appear moderate. This is to create a state of affairs and perception in the public mind for the WW3, blockbuster. The de-population Agenda – which will be blamed on ZOG West and its bad actors like the Bill and Melinda Gates Foundation, the World Bank, the Global Preparedness Monitoring Board (which is a branch of WHO) and Communist China.

This disaster will require world liberation from Soviet Russia (which is still Soviet Russia) and ZOG East. The EUSSR will be reborn within the world soviet family of nations. And in the aftermath of the war, the remaining population will be easily Sovietized and ready to accept the Judaic Imperium, its world pyramid, and communist social order for the goy plantation as the better alternative.

In the first week of November 2020, the big one here in Australia was not the US election but the decision of the Reserve Bank of Australia to lower interest rates to zero. Our CoVID commissars in every state and federal government have tanked the economy and destroyed the livelihood and jobs of millions of Australians (the tax base). In Queensland, the state government has wrecked one of the state’s largest employers – the tourism industry. So now, they are just going to print money.

The federal government of the Commonwealth of Australia is owned by the central banking cartel. There is no way they would be doing this if they were not ordered to ‘just print money’.

Really, they have no alternative – especially as they have signed up for CoVID financing from the World Bank. And for that finance, The Apex of the cartel has stipulated a number of demands for the vassal ZOGs they are bankrolling. The idea here will be to interlock with the global communist state under construction.

As one might expect, concentration camps and emergency legislation for child removal and forced vaccination are on the list of things to do here in Oz.

For the DNA harvesting exercise, Western Australia has created new powers under the Medical Emergency declared March 23, 2020. On behalf of their Chinese Communist Overseers, they have amended the Emergency Response Act 2004 with Schedule 2 of the Co-Vid-19 Emergency Response Act 2020. Under Section 25, the government has the power to remove children from their parents and put them in a concentration camp. For now, these will be called quarantine facilities. And they may use whatever force is deemed necessary to separate families and vaccinate.

A good thing the CoVID SimEx was so long in the planning stage as it gave our Queensland Commissars a head start on the big projects like the concentration camps.

A Labour government has just been returned to power in Queensland. I think they ran on a ‘Trust us to keep you safe from CoVID’ platform. I don’t have a television or buy newspapers – but from the how-to-vote card it looked to me like this was the pitch. It was just so funny you had to see all the sheeple standing masked and socially distanced in line to vote for organized crime. And no sooner was the government back in the kitchen, they put mutton straight onto the menu with euthanasia legislation.

They have to start somewhere with the depopulation Agenda and there are just too many oldies clogging up the pension system. We are the obvious go-to for the needed CoVID numbers. They can’t just keep pulling these cases out of their wazoo. As they have tanked the economy, predictably, they will start with us.

Fitting all this into the Big Doctor / Big Abortion business model of CoVID Biosecurity will take some doing.

These totally subverted Marxist governments are not Western governments. They are not even post-Christian Western states. They are Communist operations and have been for years.

The fix may have been in long before the Queensland state election at the end of October. The Communist Party of China was been signed up to do the balloting months in advance. And, just to show how on the ball they are, the Palaszczuk Labour government snaffled the Beijing Genomics Institute (BGI) for the DNA harvesting project.

Back in the PRC, they are the big DNA harvesters. They helped build the database for China’s Organ Harvesting Combine. They are major genocide helpers from way back and their Australian head office is right here in Brisbane over at the QIMR Berghofer Medical Research Institute on Herston Road, Brisbane Qld.

Looks like they are building up a DNA database for the Australian Special Economic Zone of the People’s Republic of China.
https://mailchi.mp/5bb373fa37a6/finding-the-truth-6539948?fbclid=IwAR1ZU0fuPdm_hrodzvFGJFiIBi8DEuAnWy6gjbLeO7krpUR_5BH_MlUzAR8

On the emerging pyramid of the World Communist State , the Chinese Multi-lateral with its colonies (Special Economic Zones) would seem to be the Corporate HQ of the Big Doctor, Big Pharma, Big Abortion, Big Organ Harvester Combine. “Murder and Sale of Victims’ Organs – China’s True Diabolical Face”, published September 4, 2020.

Clearly, the load share for the ‘bad guy Communist’ script has been assigned to China , while the Russian Federation now stands for Russian nationalist , Christian traditions and multi-polarity and our ‘multi-lateral partners’ on the pyramid of the world Communist state.

I can not help but notice how the fake MSM directs all the anti-vax blowback onto Bill Gates who has been assigned the Evil Globalist West script. And he is EVIL. But under the Perestroika Deception, ZOG East has the fake ‘anti-Communist’ script – notably Russia. Both Russia and China have already come out with the vax for the CoVID SimEx.

Soon there will occur a ‘teachable event’ where it will be seen by all that a multi-polar world soviet is the answer to all our problems – especially those generated by Evil Vaxers in the Globalist, uni-polar West. How we need those 17 Sustainable Development Goals of Agenda 2030 with its three objectives: deindustrialization, depopulation, and a complete switch to renewable energy sources.

In Canberra, our Commissars have not been idle. PM (ScoMo – rhymes with BoJo) and the Liberal National Party government are also banging away on the CoVID SimEx hammer and tongs for the construction of the Australian soviet.

They have legislated to enhance military deployment capabilities for civil emergencies. They want to enable foreign troops to deal with the Australian domestic sphere. These troops will be entitled to whatever they need in the course of their deployment. Because of the queering of the ADF under the DEFGLIS regime, combat soldiers are entitled to surgical procedures necessary for their gender maintenance – like boob jobs. So it looks to me like foreign troops stationed over here will be entitled to gender maintenance as well.

The anticipation of foreign troops involved in Australian domestics is completely n’sync with Prince Charles (the tampon) announcement of his threat to all of humanity with a military-style campaign.

Prince Charles Threatens All of Humanity with a Military Style Campaign