September 14, 2021 (Brian Berletic – NEO) - North Korea’s recent demonstration of an indigenously developed cruise missile has provided another opportunity for the United States to perform its own demonstration, one of its inexhaustible hypocrisy upon the global stage. It is also another opportunity to examine the real reason the US continues to maintain nearly 30,000 troops on the Korean Peninsula. 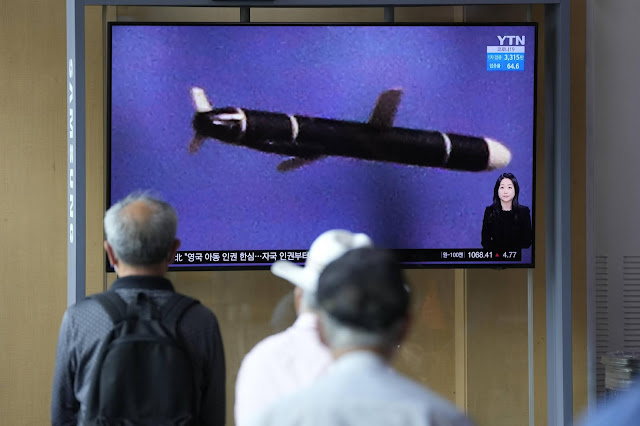 North Korea has conducted its first missile test in about six months. The long-range cruise missile being tested could give Pyongyang another way to evade its neighbors’ missile defenses, say analysts.

In a statement, the US military said it was aware of the reported launches and is monitoring and consulting closely with its allies and partners.

“This activity highlights DPRK’s continuing focus on developing its military program and the threats that poses to its neighbors and the international community,” the statement read.

North Korea has not fought a war since hostilities ended during the Korean War. The United States, on the other hand, has since waged multiple wars of aggression including the highly destructive Vietnam War ravaging all of Indochina, and in the 21st Century, the illegal invasions of Iraq, Afghanistan, and Syria, the US-led military campaign against Libya, and multiple proxy wars the US has waged through its allies including the destructive, still ongoing conflict in Yemen all but fought by America itself through its Saudi allies.

Considering America’s track record, North Korea having 30,000 US troops sitting on its border with South Korea is clearly justification enough to pursue a wide scale defense program aimed at preventing Pyongyang from joining the long and always growing list of victims of US military aggression.

The US has no genuine concern regarding the “threat” North Korea poses to its neighbors or the “international community.”

Instead, the US itself has created a persistent threat against North Korea on its borders, then presents North Korea’s continued arms programs in reaction to this threat as a pretext to maintain a US military presence on the Korean Peninsula – not necessarily to invade and topple the North Korean government – although that is certainly a secondary objective – but instead to contribute toward Washington’s long-standing efforts to encircle and contain China.

According to the US State Department’s own Office of the Historian in a 1965 document titled, “Draft Memorandum From Secretary of Defense McNamara to President Johnson,” the Vietnam War at the time was viewed as necessary only if it was “in support of a long-run United States policy to contain Communist China.”

The document identified Korea specifically as part of one of three fronts along which the US would contain China:

There are three fronts to a long-run effort to contain China (realizing that the USSR “contains” China on the north and northwest): (a) the Japan-Korea front; (b) the India-Pakistan front; and (c) the Southeast Asia front.

North Korea has had the means of striking South Korea for decades including with ballistic missiles, yet never has. The sudden “need” for anti-missile systems to counter missiles that were unlikely to ever be launched in the first place was interpreted by governments and pundits in both Beijing and Washington’s orbits as ultimately cover for systems intended for conflict with China instead.

Far from mere speculation, the scenario and obvious motives for the US provoking such a conflict with China sooner rather than later is laid out in precise detail in the 2016 RAND Corporation paper titled, “War with China: Thinking Through the Unthinkable.”

The paper looks at a hypothetical conflict fought anywhere between 2015 and 2025 noting that as more time goes by, the stronger China’s economic and military capabilities become, and the less likely the US will be able to wage and win a war against China. The obvious implication is that once a US victory over China of any sort becomes impossible, China will have irreversibly surpassed the United States and the “international order” it presumes leadership over.

A conflict fought sooner rather than later is expected to be limited and confined to conventional weapons, fought primarily in the Pacific with targets in Chinese territory attacked by US forces.

The paper notes that China’s military is concentrated in Chinese territory and that China lacks conventional weapon systems capable of striking the US homeland. The paper all but admits that any conflict between China and the United States would require the US military to be in close proximity to Chinese territory, thousands of miles from America’s own shores, and operating in a provocative manner.

Virtually every scenario presented by RAND authors regarding the triggering of such a conflict is rooted in ongoing tensions deliberately and continuously stoked by US interference everywhere from the South China Sea to the strait separating the Chinese mainland from Taiwan.

In such a conflict, the US fears most of all the targeting of its bases in both Japan and South Korea from where it would be launching military strikes against Chinese targets.

THAAD defense systems are there specifically to defend those bases and nothing else. Any collateral damage inflicted on either the Japanese or South Korean populations by a retaliatory attack by China on US bases in the region is admittedly part of a plan to drag at least one or both nations into the conflict alongside the US.

Regarding Japan specifically, the report notes:

Japan’s entry would be likely if the nation were party to the underlying dispute and almost certain if its territory (where US bases are) were attacked.

THAAD missiles and other defensive systems placed in either Japan or South Korea, predicated on the alleged threat North Korea poses to both nations, will be defensive systems in place just in time to fit into the RAND Corporation’s optimal timeframe for a successful US-led limited conflict with China.

The net result will of course be economic ruin for all of Asia, not just China.

The region will be set back decades by even a short conflict the RAND Corporation predicts will be “ intensely violent.” Even if the US “lost” such a conflict militarily, the economic damage would still present Washington with a strategic victory.

This would fulfill US foreign policy objectives of maintaining American primacy over the Indo-Pacific region for decades to come – not because it out-competed China, but because it knocked the entire region down faster than the US itself is declining, and knocked the entire region down lower than the current state of American social, political, economic, and military deterioration.

The ultimate irony is that American accusations against North Korea of being a regional and global threat are part of the US’s own attempts to continue preparing the battleground for a  sought-after limited conflict with China which will – in reality – jeopardize the entire region and the globe.