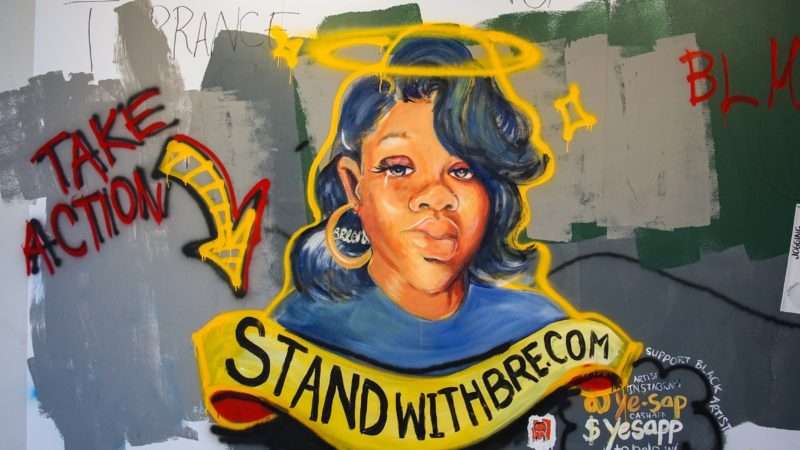 Gun-rights groups understandably are upset that a Louisiana public school punished a fourth-grade student after a teacher saw a BB gun in the boy’s bedroom during a video classroom session. That was an absurd case of political correctness, given that the gun merely was in the background. It reflects infuriating anti-gun bias.

Now contrast many gun activists’ reaction—or apparent lack thereof—to a more significant gun-related issue that grabbed headlines the same week. A grand jury in Louisville gave a wrist slap to officers who killed Breonna Taylor during a raid at her home. The African-American medical worker hadn’t done anything wrong. The drug-related warrant, which spurred the raid, apparently involved her former boyfriend.

I scoured the internet and found little outrage from gun-rights groups and supporters. Yet, the Taylor case—as well as the issue of police raids and police militarization, in general—poses a real risk to Americans’ Second Amendment rights. They also pose risks to our other constitutional rights, such as protection against government searches and seizures, and the requirement for due process.

Heavily armed, black-clad SWAT officers conduct thousands of these raids each year, with many of them botched and some even taking place at the wrong address. As the New York Times recently explained, Taylor and her boyfriend, Kenneth Walker, were in bed and heard banging. Police say that they announced themselves before busting down the door with a battering ram, but Walker said he didn’t hear that announcement—and feared the intruder was Taylor’s ex-boyfriend.

Walker fired his gun, hitting a sergeant in the thigh. One officer reportedly fired 10 rounds blindly into the apartment, while others fired five rounds at Taylor, killing her. Dispatch logs suggest the officers waited 20 minutes before providing medical assistance to Taylor. Police found no drugs in the apartment, according to the family lawyer. The grand jury indicted one officer for “wanton endangerment,” but filed no charges against the others. One officer was fired.

Authorities dropped attempted-murder charges against Walker, but they typically file such charges against citizens who use firearms when the intruders turn out to be officers.

“In theory, no-knock raids are supposed to be used in only the most dangerous situations,” per a 2015 Vox report. “In reality, though, no-knock raids are a common tactic, even in less-than-dangerous circumstances.” It noted that 80 percent of them involve the execution of a simple search warrant. (A judge had issued a no-knock warrant in the Taylor raid, even though it later was amended to a knock-and-announce warrant.)

Gun-rights supporters argue correctly that Americans should be free to own firearms to protect themselves. When the government employs these police-state tactics, how can you reasonably know that the people plowing through your door aren’t criminals who want to kill your family? In my view, such raids—whether “no knock” or “knock and announce”—also pose a grave risk to Americans’ Second Amendment protections (as well as to police who conduct them).

The late San Jose police chief, Joe McNamara, worried that police agencies increasingly send SWAT teams to homes to deal with relatively minor incidents if they suspect that the person owns a firearm. With California’s reporting system, any gun owner could be subject to a SWAT raid solely because they have availed themselves of this legal right. After all, it’s easy for the authorities to know if you own a weapon.

Gun-rights supporters are on point with this argument, which one can easily confirm by perusing the Founding Fathers’ statements about gun ownership. Yet in most of these police-shooting cases, the loudest Second Amendment supporters go silent. Few of them issued any substantive comment after a Minnesota police officer in 2016 shot to death Philandro Castile, who had told the officer he had a licensed firearm in his possession.

The fundamental problem is rooted in the nation’s endless drug war, which in turn has led police agencies to behave more militaristically. “Simply put, the police culture has changed,” wrote McNamara in a 2006 Wall Street Journal column. “An emphasis on ‘officer safety’ and paramilitary training pervades today’s policing, in contrast to the older culture, which held that cops didn’t shoot until they were about to be shot or stabbed.”

Racial disparities certainly matter, but I believe that cultural change is the impetus for ongoing police-brutality protests. Those Americans who support the right to private firearms ownership—and the groups that claim to speak for us—need to speak out about this threat to our liberties. Quite frankly, it’s a far bigger problem than schools that foolishly suspend kids for having a BB gun within view of the video camera.