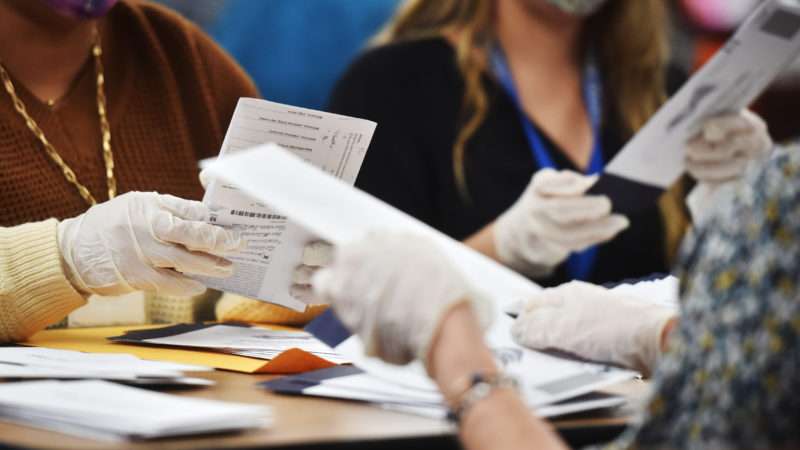 President Donald Trump tweeted on Thursday morning that election officials should stop counting votes—and his campaign’s legal team is firing off a flurry of lawsuits in an attempt to at least slow the democratic process down.

But Trump’s “STOP THE COUNT” tweet is a good reminder of how purely political—and a bit silly— all this has become. The president doesn’t control the election process; each state does. And there has been no indication of voter fraud or election malfeasance that could somehow swing the election. Trump’s behavior is nothing more than an attempt to stop the legitimate democratic process from fully playing out (and an inconsistent attempt at that, given that Trump supporters have been cheering for additional vote-counting in Arizona, where the president is hoping to make a late comeback).

But as the election drags on, Trump seems determined to push the result into overtime. In Michigan, Georgia, and Pennsylvania, the Trump campaign is suing to halt ballot counting or to challenge what it says are illegal late-arriving ballots. The campaign also wants to intervene in an ongoing U.S. Supreme Court fight involving Pennsylvania’s rules for late-arriving mail-in ballots. And the president’s team says it will seek a recount in Wisconsin, which former Vice President Joe Biden won narrowly.

The flurry of legal challenges means the election could drag on in complicated, messy ways for days or even weeks. The combination of potential recounts and the specter of the U.S. Supreme Court’s involvement suggest some parallels to the infamous Florida recount that decided the 2000 presidential election—except this time, multiple states are involved.

On the other hand, it’s also possible that Wednesday’s actual and threatened legal actions will end up being nothing more than the final gasps of a desperate campaign that’s heading toward a narrow but definitive loss. In Georgia, for example, the Trump campaign is suing over the possible inclusion of 53 late absentee ballots counted in one county. One of several lawsuits filed in Pennsylvania on Wednesday seeks to disregard 93 absentee ballots in Montgomery County.

While accurate counting of all votes is of course important, it seems highly unlikely that a few dozen votes will alter the outcome of the race in either state. A repeat of the Florida 2000 controversy will only be possible if a single state ends up swinging the outcome of the election and if that state’s final tally is extraordinarily close. In that context, the lawsuits launched in the 36 hours since polls closed are essentially an attempt to start as many potential challenges as possible in hopes that one will have legs.

Lawsuits filed on Wednesday in Michigan and Pennsylvania allege that Trump campaign poll watchers were not given access to facilities where some absentee ballots were counted. In both places, the campaign is asking judges to halt counting until access for poll watchers can be assured. Another Pennsylvania lawsuit seeks to limit how long voters have to provide identification if their mail-in ballots are rejected for mismatched signatures.

The outstanding U.S. Supreme Court case involving Pennsylvania’s decision to count absentee ballots that arrive by Friday—as long as there is no evidence they were mailed after Election Day—also received renewed attention on Wednesday as the race in the Keystone State predictably tightened. Again, that will only end up mattering if the number of late-arriving ballots is significant enough to affect the outcome in Pennsylvania and if Pennsylvania’s 20 electoral votes prove decisive.

The same is true in Wisconsin, where Biden was declared the winner on Wednesday by about 20,000 votes. Trump’s campaign has promised to push for a recount.

“There have been reports of irregularities in several Wisconsin counties which raise serious doubts about the validity of the results,” Bill Stepien, Trump’s campaign manager, claimed in a statement. “The president is well within the threshold to request a recount and we will immediately do so.”

But with Biden holding leads in Arizona and Nevada after being declared the winner by slim but significant margins in the crucial states of Wisconsin and Michigan, time may be running out for the president. Pennsylvania’s slow-going count of mail-in ballots is also trending toward a Biden win, though Trump had a 600,000-vote lead at the end of Election Day. Any serious legal challenge to the vote totals in those states will have to convince judges to toss out votes that were cast on or before Election Day.

In short, it’s a Hail Mary effort that seems aimed at delaying the inevitable, or at least at giving Trump more time to complain about the outcome.