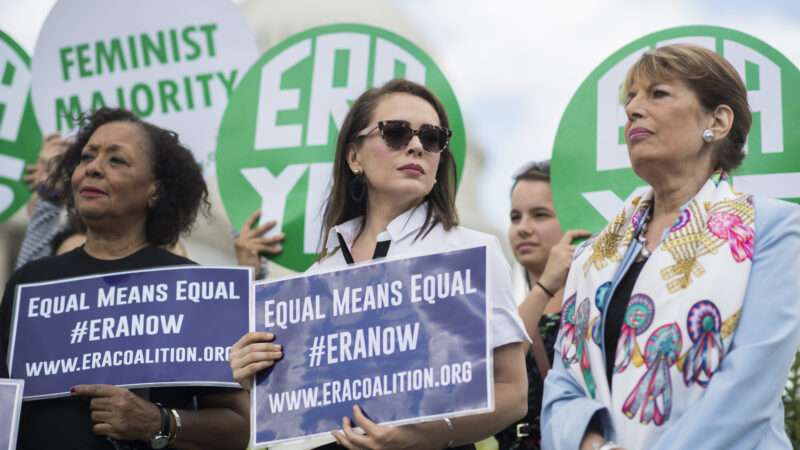 Deadline for passage expired in 1982. The House will vote this week on a resolution to remove the time limit for ratifying the Equal Rights Amendment (ERA) to the Constitution. The ERA was first proposed more nearly a century ago, back when the idea that “equality of rights under the law shall not be denied or abridged by the United States or by any state on account of sex” was both radical and not already codified in U.S. law in a million ways.

The ERA was reintroduced in 1971 and approved by Congress in 1972, but because it would amend the U.S. Constitution, it required ratification by 38 states. Congress set a deadline of March 22, 1979, for this to happen. When the deadline came, however, only 35 states had voted to ratify. Congress then extended the ratification deadline to June 30, 1982. But in the interim, no new states voted to ratify and five states voted to rescind their earlier approval. So people moved on, striking down sex discrimination under the law through various court cases and other pieces of legislation.

In recent years, however, Democrats have been pushing to revive the long-dead ERA. Nevada voted to ratify in 2017, Illinois in 2018, and Virginia in 2020. ERA proponents say this means that a sufficient number of states (38) have now ratified.

Others counter that not only did five states revoke their ERA support, but also that the three recent ratifications came more than three decades after the deadline for ratification expired.

Late Supreme Court Justice Ruth Bader Ginsburg opined in 2020 that ERA supporters should “start over,” since the new votes for ratification came “long after the deadline passed.”

And earlier this month, a federal judge ruled that the Nevada, Illinois, and Virginia votes did not count.

But Democrats aren’t letting this one go. On March 5—the same day that U.S. District Judge Rudolph Contreras ruled against the recently ratifying states—Rep. Jackie Speier (D–Calif.) introduced a House Resolution (H.J.Res.17) to eliminate the earlier deadline for ratification. Since then, the bill has attracted more than 200 co-sponsors, all but one of them Democrats. (The lone Republican co-sponsor is Rep. Tom Reed of New York.)

“Notwithstanding any time limit contained in House Joint Resolution 208, 92d Congress, as agreed to in the Senate on March 22, 1972, the article of amendment proposed to the States in that joint resolution shall be valid to all intents and purposes as part of the United States Constitution whenever ratified by the legislatures of three-fourths of the several States,” states the resolution.

Messaging around the modern ERA has focused little on what changes would stem from its ratification; instead, it’s treated as a self-evidently necessary pre-condition for “women’s equality.“

Democrats’ vagueness and hyperbole about what ERA passage would actually do—and their refusal to push for re-ratification (as Ginsburg preferred) rather than counting half-a-century-old votes as relevant—suggest this is more about politics than making a material difference for women.

Supporting the ERA means Democratic politicians (and their celebrity boosters) get automatic attention as advocates for women while providing the party with an easy way to smear Republican critics as sexist pigs who don’t believe in women’s equality.

Tell your Reps to vote Yes on HJ Res 17, there’s no time limit on equality. The House is voting to remove the time limit on the #ERA on Wednesday! This is our last chance to thank supporters and ask for more co-sponsors. https://t.co/2BJGQTDCma #EqualFuture #ERANow

A new documentary premiering at SXSW’s virtual film festival looks at whistleblower Reality Winner, who was arrested in 2017 and prosecuted under the Espionage Act. Winner’s leak of a National Security Agency report related to the 2016 election was “motivated by serving the public. No sources or methods of spycraft were revealed,” notes Business Insider. Check out a clip from United States vs. Reality Winner below:

“For nearly 80 yrs, there have been severe limits on how federal agencies and private plaintiffs could enforce America’s antitrust laws against a state-sanctioned entity, like an occupational licensing board.” https://t.co/ZOm0cpeREP @thedispatch @TraceEVMitchell @senatorshoshana

But of course, U.S. lawmakers are too busy holding their 8 billionth gripe-about-tech-companies “antitrust” show for that…

Being an independent contractor for me = freedom. I DO NOT want to be classified as an employee under ANY law. All Americans should be free to work the way we want to work. #FightforFreelancers #IRSnotabc #PROAct

• An adult store in Carencro, Louisiana, is fighting the city’s ban on selling sex toys.

• A Cincinnati-area police officer is facing criminal charges after allegedly drugging and raping someone in January. Hamilton County prosecutors “are concerned that more victims may be out there,” they said in a statement.