Is Zoltan's Market Doomsday Imminent? Here Are The Two Things To Watch

In the aftermath of Zoltan Pozsar’s stunning “doomsday” report about an upcoming crisis in the repo market, which we discussed extensively yesterday, and which predicted that the Fed may “lose control of overnight rates” leading to a vicious dislocation in repos coupled with a paralysis in the FX swap market, many traders who (pretend to) understand the implications of what the former Fed strategist said, have quietly hunkered down and are looking carefully for sings that Pozsar is correct, a worst case scenario that could then lead to a spike in Treasury yields, a forced deleveraging of hedge funds, and a plunge in equities. In short: a stock market apocalypse.

But what are the signs that Pozsar is looking at, to determine that a liquidity crunch is imminent? There are two key leading indicators that serve as an advance warning that all hell may be about to break loose.

The first thing to watch to determine if the repocalypse 2.0 is about to hit, is the repo rate itself.

While the overnight general collateral repo rate remains dormant, the same can not be said about its forward cousin, the “turn” repo rate which covers the year end period of Dec 31-Jan 2, and which as we pointed out last night, has jumped to 4.10% as of Tuesday, and which on Wednesday moved wider by another 5bps to 4.15%, according to Curvature securities. 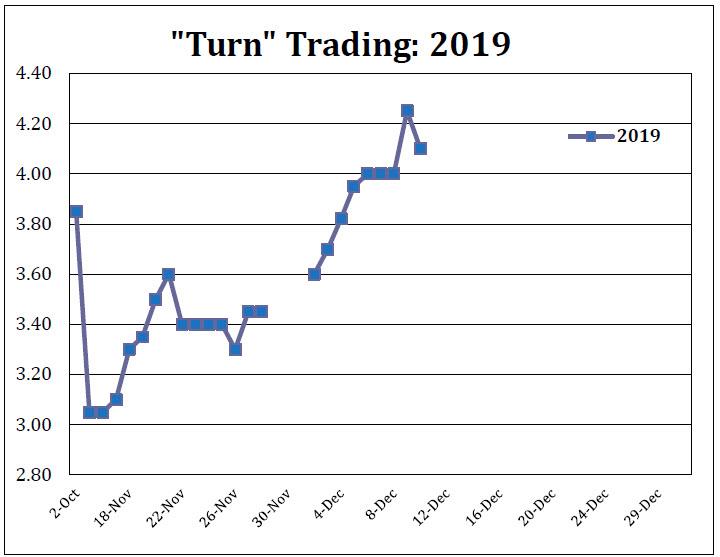 As a reminder, the last “turn” saw the overnight GC repo soar as high as 6.00%, so it is safe to assume that with about $100BN less in reserves, the overnight repo may rise as high if not higher…

… and the turn could go higher still.

The second, and perhaps more critical indicator of a coming market crisis, are FX swaps.

Recall Pozsar warned that as a result of a lack of bank reserves spread evenly across the system, “FX swaps could end up as the orphaned asset class without an obvious backstop, and that may force banks in some parts of the world to the edge of the proverbial abyss.” As a result, the “year-end in the FX swap market is shaping up to be the worst in recent memory, and the markets are not pricing any of this.”

Needless to say, he saw no need to mince his words which suggests that the situation is extremely serious – not to mention that there are few repo market experts as erudite on the nuances of financial plumbing as Pozsar – and he may well be right, if he is correct about another even more stunning allegation: that “at least one large U.S. bank appears to be pricing some of its FX swaps trades such that it misses those trades – a polite way of clamping down market making activities.” We translated this as follows: at least one large US bank appears to be actively pushing for a collapse in the FX swap market, with a very specific intention: to force a market crash in the coming days, forcing the Fed to launch full blown QE 4, not just a monetization of T-Bills.

Naturally, the most accurate indicator that the FX swap market is starting to freeze, are cross-currency basis swaps themselves. And, as the chart below shows, both EUR and JPY 3-month swaps have started to push sharply wider in recent weeks. As Bloomberg points out, the premium to swap Japanese yen into US dollars for three months – a bet on rising dollar scarcity – widened more than 4 bps to the highest level in seven weeks, while the a similar spread to convert euros into dollars expanded by as much as 6 bps. 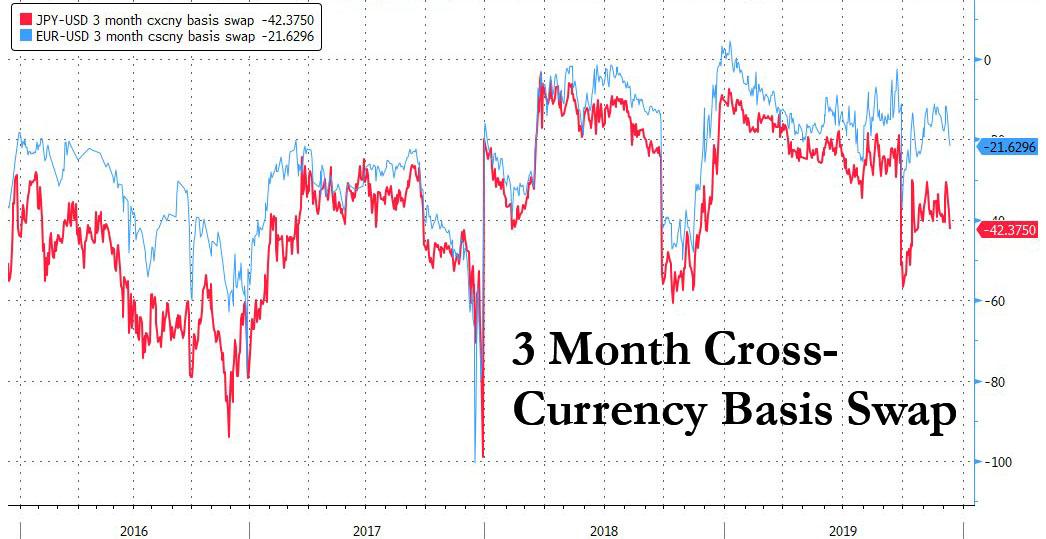 Alternatively, one can use a blended global USD liquidity proxy in the form of an aggregate USD basis swap, which also shows significant tightening in the past week.

Looking at the charts above, there is good news in that none of the current reads are remotely as apocalyptic as Pozsar is making them. However, there are three critical dates in the coming week that could results in a violent move wider in both swaps and repo rates, which would then instantly cascade to the rest of the market. They are the following:

Together, these three events could potentially have a direct impact on financial conditions, on reserve levels, and by extension, could catalyze the repocalypse that Pozsar is confident is now coming.

So for all those worried that the artificial levitation in stocks is not indicative of underlying liquidity and leverage stresses, keep track of any sharp moves in the series above, as any notable change could become the trigger that ensures traders have to cancel their Christmas vacation for the second year in a row.